Is anyone really surprised that Louis CK came back?

Harvey Weinstein may well be going to prison; Louis’s going back to premium cable. What's a little unusual is that anyone ever thought he would not be.

News that Louis CK, the briefly disgraced stand-up comedian who disappeared for a while, has returned to stand-up, and been well-received, has set the hares running. CK – his real name is Szekely and he’s the children of academics, despite the working-class act – has been accused by several women of blocking the exits from backstage rooms with his body, and then tossing off in front of them.

Nasty, coercive stuff, and pathetic too; as with Harvey Weinstein, the act seems that of someone getting out a lot of anger for earlier rejections. But CK is accused of only this; Weinstein is accused of rape, imprisonment, and hiring ex-Mossad agents to destroy the lives of his accusers. Weinstein may well be going to prison; Louis’s going back to premium cable.

What I find a little unusual is that anyone ever thought he would not be. There are two reasons for this. The first is that well have you seen his show? Louie is a deliberately raw, simply written, autobiographical sitcom whose topic is the desperate, often repellant life of an only just-successful middle-aged man, with numerous acts of malfeasance, including an episode in which a pass thrown at a female friend, Pamela, becomes a situation of possible near-rape. She pushes him off, saying “this would be rape if you weren’t so stupid. You don’t even rape well.” She’s shaken, but also sees it as a desperate act.

Did anyone really doubt, when this episode aired in 2014, that it was confessional? The point of the series was to be unsparing in its self-assessment, of what a petty, selfish, envious, resentful creature the man could be. But that relates to the second reason why Louis is back. For in the episode the ugly encounter between Louie and Pamela is handled as a lot of such incidents are between men and women, middle-aged and otherwise — as a few splinters off the crooked timber of humanity, rather than an occasion for denunciations, trigger warnings, trauma counselling and the like.

Louie worked as a show, because we recognised it as a real picture of the rough way we deal with this shit – and that the one-size-fits-all denunciation and damnation of every ugly encounter had as much to do with discursive power as social justice. Louis CK’s acts were pretty foul, but there is also pushback against the fact that actor Aziz Ansari is working again, having disappeared for a while, after being accused of a much murkier kind of sexual misconduct.

These and other borderline cases suggested to many that #metoo was overreaching, defining any messy encounter of power asymmetry as one of wrong and exploitation. That has now come full circle, with Asia Argento (a Weinstein accuser), and Avital Ronell, an New York professor, two high-profile examples of a number of women who’ve been accused by young men – tendentiously, on the evidence — of sexual shakedowns.

As all the Louis CK stuff was going on, the comedian Zoe Coombs Marr launched a Twitter thread, talking of a time when, as part of a group set, she had to follow a comedian doing rape humour who was combining it with full-on audience interrogation. What’s interesting about the tweets– which got hosannas of praise – is that they elided the distinction between real actions, like Louis CK’s non-consensual wanks, and a comedian’s act, where he was using a certain type of aggressive humour that very attendance at a multi-act stand-up gig licenses. People go to such gigs for shock, edge, liveliness, and the (somewhat cliched) unexpected.

Coombs has another suggestion (one of several, to be fair): 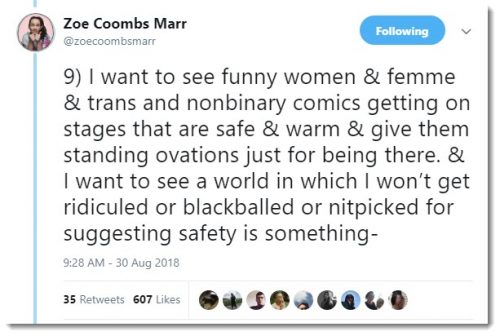 Really? That’s really what you want to see at a comedy gig? Because that doesn’t sound like comedy. It sounds like therapy. In its pursuit of safety, it’s the very opposite of art at all.

Which is where this has all been going really. Hannah Gadsby expresses it most starkly in Nanette, when she rejects Picasso – or even the idea that Picasso’s art might have value – because of his aggressive and often brutish behavior. People have wondered at what the genre of Nanette might be, and surely the answer is Nanette is a sermon. Sermons were a hugely popular genre in the 19th century, their appeal as inexplicable to us as stand-up’s will be a hundred years hence, and there is a big dose of Methodist-Maoist puritanism in this push. Art’s purpose, in this conception, is not to entertain, amaze, challenge, transform, blow apart, but to affirm a moral order, which prizes the preservation of intact selfhood — “safety” — above all, and is in service to it. The safety crowd are all secularists, which is one reason why they don’t understand the deep and literal Puritanism of their attitude. The obvious literary antecedent of Nanette, near beat for beat, is Pilgrim’s Progress.

We can’t do comedy like that. We can’t live like that, which is why the #metoo thing is coming apart, and why a certain aggressive reaction in art is coming to the fore, a return of the repressed. Nanette was presented as an exit from comedy. Gadsby now says she is returning to it. Well, it’s the business of show. In two years she’ll probably be on the same episode of Kimmel as Louis CK. I’m here, all weak. Try the frisk.

One reason I expected Louis CK to survive was his immediate admission of guilt – unlike every other male celebrity accused in the past year. The others ducked, denied or told their PR agent to remain silent. Louis CK gave an apology & made it public.

Don’t see what your point is Guy. Maybe you should watch a female comics pov on this topic; Samantha Bee last night on SBS.

Although I agree that comedy should not necessarily be warm and fuzzy, the example this article gives is horrendous and the author has left out Ms. Marr’s complaint, which is rather disturbing.

`
And I stopped doing standup at 26 after a gig in Sydney when the act before me went into full rape “riff” that ended with him literally pointing in a young woman’s face in the front row, saying “have you been raped?! No? Are you sure?! What about when you were 12 & your dad was holding you down and fucking you?!”
”

That’s a little bit fucked up.

But you don’t know how it was done. Maybe the audience member was laughing too. People have been doing rape humour, sick humour, audience baiting, for years. That is categorically different to actual non-consensual coercive acts.
If comedians want to run nights with certain limits on material, that’s fine. But using offensive, edgy or abhorrent material is simply part of free expression

Fair enough if audience members are free to express themselves back by throwing missiles at the “comic”. Could be a great night out.

as I say the audience might have been enjoying it. if they weren’t theres always heckling. have you never been to a multi-comic stand-up event?

Getting a standing ovation just for being there? No. U need to hone skills to get on stage. You don’t get a clap just for being you. This is not kids stuff. U don’t cut it on stage u go elsewhere.

“The safety crowd are all secularists, which is one reason why they don’t understand the deep and literal Puritanism of their attitude.” Yes. I’ve always thought this about identitarians (for this comment’s purposes, those who aren’t of the Combahee River Collective school of identity politics).
It’s all about being the most perfectly inclusive person and being the one who is devout enough to point out That One Tiny Reason Why What You Said Is Problematic. It’s so similar to the way, eg, as a catholic I strive not to commit sins and to be the best christian I can be. As an identitarian I strive to be the most inclusive I can be and not to engage in privileged/problematic behaviour.
It’s ironic because identitarian/SJW spaces tend to be the least inclusive. God forbid you express disagreement with any aspect of the doctrine!
Re trans/nonbinary/etc comedians I think the point Ms Coombes-Marr is trying to make is that comedy spaces aren’t welcoming for people outside the dominant white male paradigm, there is a huge risk of transphobic/sexist heckling (etc). But a round of applause for just being there is just insulting. Surely the best way to compliment a comedian is by laughing at their material.