It's the start of renewal time for TV networks, and of all the changes in commercial TV none will be watched more closely than Nine's Today, where Karl Stefanovic and Georgie Gardner have presided over falling ratings and a widening gap behind Sunrise.

It’s the start of renewal time for TV networks (or some commentators call it “The Killing Fields”). The closing months of each year have always been a time in Australian TV of great change, renewal, close calls, career-ending decisions, program-saving decisions and a lot of leaks and rumours.

September marks the start of internal reviews, which are firmed up in November as the rating seasons approaches year end, and new contracts and other deals have to be renewed, ended or simply postponed. Hosts, production staff, producers all know the rules — it is all about ratings performance (especially in key demographics), costs (staff and production) and advertising and other revenues written against the regular programs up for renewal.

For some programs there are no worries — the programs that form the ratings spine of the networks: news, current affairs, ratings blockbusters like The Block or My Kitchen Rules, NRL and AFL coverage. What is changeable are the hosts, producers and others working on those programs. And of all the changes in commercial TV none will be watched more closely than the front two on Nine’s Today — Karl Stefanovic and Georgie Gardner who have presided over falling ratings and a widening gap behind Sunrise on Seven in 2017.

All breakfast TV programs have seen a fall in audience numbers this year, but Today’s place behind Sunrise has been cemented. In the past year, average viewer numbers for Today have fallen 66,000 to 366,000 nationally. That’s compared to Sunrise, with a 68,000 fall to 455,000 nationally.

The fall has been year-long (Today has only won one week this year out of the 34 rating weeks) and has accelerated in the past month, widening to a gap of 100,000 to 150,000 a morning some days in August. In metro markets Sunrise has led Today in each of the past three weeks. 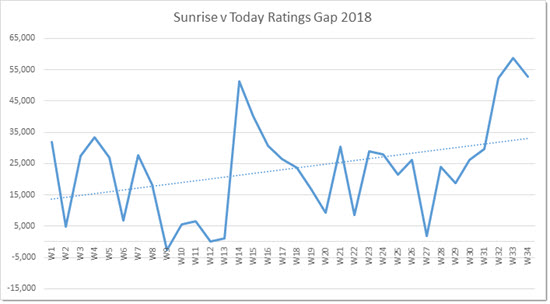 Today hasn’t recovered from the PR disaster last year of Lisa Wilkinson suddenly defecting to the Ten Network. While Nine denied it, the dominant narrative was that Wilkinson left because her pay wasn’t equal to her male co-star’s. Coupled with Stefanovic’s bitter divorce — ex-wife Cassandra Thorburn has accused him of not spending enough time with the kids in a magazine interview — and other damaging stories (Ubergate, controversy over his upcoming nuptials, his relationship with Gardner), it’s easy to connect the dismal ratings with the show’s host.

Media analyst Steve Allen told Crikey that Nine was “between a rock and a hard place” when it came to what to do about Stefanovic. “The calculation that Nine has to make is how much would it cost to terminate him, then how much of the audience would leave because of that, how much of the audience would come back, who would replace him and how much it would cost,” he said. “This would have to be something they’re thinking about because they’ve well and truly lost to Sunrise.”

Stefanovic’s reported $2 million salary is on a contract due to end this year, and while the network has stridently said it supports Stefanovic, there are scenarios being touted where Stefanovic will no longer be waking up with Today.

There are a few reasons Nine might be reluctant to get rid of Karl. One is the memory of the tumultuous period before it settled on Wilkinson as co-host. She replaced the “boned” Jessica Rowe, who’d replaced Tracy Grimshaw shortly after Steve Liebmann had also left the program.

Stability for viewers is one of breakfast TV’s priorities, and network executives have been keen to settle any rumours of the rift between Gardner and Stefanovic, which all parties have consistently denied.

“The thing destabilising the program is the ongoing commentary about the tension between Georgie Gardner and Karl Stefanovic,” Allen said. “And then you go back a year when, in quite public and conflicted circumstances, his cohost (Wilkinson) left the show, which has contributed to people’s indifference to him.”

As well as shaking up the cast — surely Nine would have to look outside the network for someone suitable — one out-of-the-box suggestion came from Studio 10′s former executive producer Rob McKnight on his podcast TV Blackbox last week. To differentiate the show from Sunrise and, to a lesser extent, Studio 10, McKnight reckons Nine should just move the program to Melbourne. As well as offering a point of difference, it would give the network a chance to refresh the cast.

Such a move would require significant investment (in staff, sets, and other facilities) — the only live show Nine currently produces out of Melbourne (apart from the 6pm Melbourne News) is the dismal AFL Footy Show.

Allen didn’t agree that moving to Melbourne would necessarily immediately give a ratings boost, especially given where the ratings have been lost. “The losses in audiences are greater in Sydney than in Melbourne, and the gap is greater in Sydney than in Melbourne. And if you’ve got a problem and one of the key problems is the host, (moving to Melbourne) would be a coward’s way of doing things.”

Instead, the program should look at a total makeover of the cast, Allen said. “Given the Karl Stefanovic problem, and part of that is his long association with the program, it’d have to be a complete makeover, and you might look at some of the talent at other networks.”

Nine refused to comment, but Crikey understands it is not currently planning any changes to the show.

If Karl leaves Today I trust it would be to present a talk show with Pyne & Albanese.

Does anybody really care if it Karl or a sock puppet presenting on those shows? Quite simply paid way too much for presenting platitudes and having a good dental plan.