What are Ben Roberts-Smith’s chances against Fairfax?

The former soldier has launched defamation action over a front-page story in The Age. His reputation is inevitably harmed, but the question of whether he'll win the case is a bit more complicated.

“Ben Roberts-Smith — Victoria Cross recipient, Father of the Year, business leader and mental health advocate — is one of Australia’s most respected public figures.” So begins the front-page article in The Age of August 11, for which Roberts-Smith is now suing Fairfax for defamation. He claims that his “business, personal and professional reputation has been and will be brought into public disrepute, odium, ridicule and contempt”.

Roberts-Smith had earlier tried to stop publication of the story altogether, failing to get an injunction from the Federal Court the night before. That ensured extra publicity for what was already going to be a huge story. The Age ran with a series of allegations of potential war crimes committed by Roberts-Smith in Afghanistan, as well as bullying behaviour while serving, and inappropriate conduct back home (an extra-marital affair and alleged domestic violence towards his girlfriend).

There’s no question: The Age did a number on Roberts-Smith, and his personal reputation has inevitably been severely harmed. Will he win his defamation case though?

[How Ben Roberts-Smith is managing the media]

It’s been suggested that this story has similarities to the Joe Hockey case, when he sued Fairfax for a Sydney Morning Herald article that alleged he had been effectively selling access to himself to donors while serving as treasurer. The court found that the substance of the article was true, but Fairfax fell over on the headline “Treasurer for Sale”, which implied a far more sinister level of personal corruption than the article could substantiate. The Age ran the Roberts-Smith story with the headline “The Cracks in a War Hero’s Facade”, and a large illustration representing him as a statue which has taken a bit of a beating. The suggestion is that the illustration, taken on its own, may be more seriously defamatory than the article which accompanies it. Well, nah — not so in my view. It’s important to understand the distinction for which the Hockey case now stands as authority. The reason Fairfax lost wasn’t because the headline was a bit of an over-reach. It was because they put the headline on posters and social media, physically separated from the whole article.

It has always been assumed by the courts in defamation cases that people are diligent readers (and viewers). If they see a headline in a newspaper, it is taken as given that they will read the whole article under that headline. Therefore, the piece is looked at as a whole. In that context, the suggestion that Joe Hockey might have been “for sale” was qualified by the article itself, which made it clear that there was no suggestion he was taking bribes, rather he was just effectively selling access to himself — which was not illegal.

The headline “Treasurer for sale” had however also been placed on posters, without the article. There was nothing else for the punters to read, so they were left with just the knowledge that Fairfax was saying that Joe Hockey could be bought; and that, the judge found, was defamatory. Because it was also untrue, Fairfax had no defence.

I don’t know whether the cartoon illustration of Roberts-Smith was published on its own anywhere, but I don’t think it matters. All it conveys to me is that the public image of a particular God-like figure has been somewhat tarnished, but it gives no indication of how. The headline, likewise, is generic and uninformative.

The really nasty stuff is in the detail of the article. The stories told there are extremely serious, involving alleged behaviour which may offend domestic and international criminal law. Against that background, the headline and illustration are pretty benign. The point is that, whether a reader saw them in conjunction with or independently of the full article, they wouldn’t have created a worse impression or damaged Roberts-Smith’s reputation more than a casual read of the article would.

On the substance, Fairfax will plead truth. They will have legalled this piece a billion times before publication, and must have felt pretty comfortable before going to print — knowing that Roberts-Smith was 99% sure to sue.

Roberts-Smith alleges that much of what Fairfax ran with is the product of federal crimes, because the military investigation into his activities in Afghanistan is all top-secret. No doubt someone broke a law by leaking this stuff, and maybe Roberts-Smith’s lawyers will try to nobble Fairfax’s defence by playing the national security card over their supporting evidence. I don’t think that’ll wash. Truth is truth. Either the allegations exist or they don’t. The Age was clear in not saying that they’ve been established.

So I don’t think Roberts-Smith has much of a case. In filing it, he risks giving Fairfax a bigger platform to put his military and personal lives in the spotlight and see whether they can widen the cracks a bit more. It’s high risk. Personally, I prefer the approach of that other war hero, the Duke of Wellington, when a scandal-monger tried to blackmail him for money, threatening to run a story that he had had an affair with a sex worker. “Publish and be damned”, the Duke replied. And they did. He was fine. 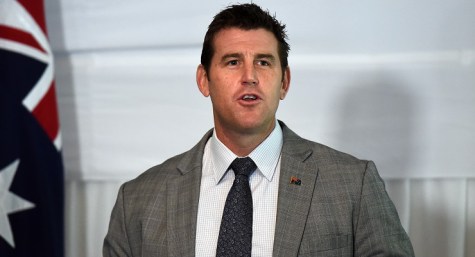 Defamation costs Fairfax half a million

Apropos another story in Crikey today, I see Roberts-Smith is wearing an Australian flag lapel badge in the photo accompanying this article.

Enjoy quality journalism, but always been less comfortable with the “expose” variety, no matter how well written or whom the subject. The often protracted and usually unsatisfying legal consequences to all parties make it cynic’s delight.
The Hockey case is the penultimate example of high legal farce, where it was found that what was written was substantially true, but he was defamed by a headline (and not a very dramatic one at that!)
Lets just say that it was very surprising when Roberts-Smith started branding himself as tall handsome war hero (complete with shirtless photo ops); maybe its a generational thing, but believe a lot of us prefer the words “modest, unassuming” to accompany the word hero.
He invited snipes, now has them big time, no matter what the legal outcome.

Fascinating stuff. I’m more interested in why NSW Police had not spoken to Roberts-Smith re the alleged domestic violence assault (as he stated) despite the complaint being made to them.

It used to be “she walked into the door”.

I think a distinguishing feature of the Hockey case was that internal Fairfax emails were found to establish their publication of the statements was “actuated by malice”, which eliminated the defence of qualified privilege i.e. public interest…

I think a distinguishing feature of the Hockey case was that internal Fairfax emails were found to establish their publication of the statements was “actuated by malice”, which eliminated the defence of qualified privilege i.e. public interest…