The controversy around a recent Honi Soit article about North Korea isn't all that surprising when you look at the history of its author.

However, Tharappel reports that, rather than being shown “the very best of the country”, his party was shown “a lot more of daily life, from humble farming households, to department stores, to the educational facilities on offer to Korean children. The repression is swept over as an unfortunate necessity for any country fighting imperialism:

A country that endeavors to credibly stand up to the United States must necessarily be authoritarian for the simple reason that they are a nation at war, and cannot be one where the population are timid, beaten, and demoralised …

He concludes that he saw a “highly organised, egalitarian and energised society, with good reason to believe that they’re now reaping the fruits of past sacrifices”.

Inevitably, there was a backlash. Heir to Sam Dastyari’s “woke but amusing” throne, Tim Watts, tweeted “Everyone associated with this article ought to be ashamed” and the Australian Union of Jewish Students are reportedly considering making a formal complaint. 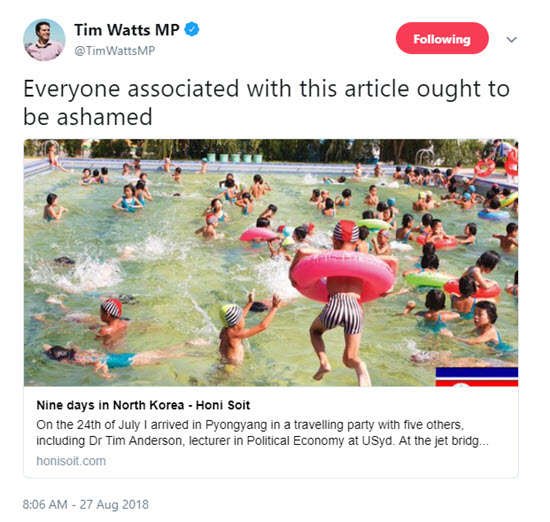 Tharappel is unrepentant, saying criticism of his piece is “repeating exactly what the US corporate media says about the DPRK”. And it’s true, US corporate shills like Amnesty International and Human Rights Watch are always banging on about the torture, repression and starvation imposed on the people of North Korea.

This isn’t Tharappel’s first brush with controversy. He was similarly unapologetic when he called Kylar Loussikian (then at News Corp) “the traitorous scum who desperately wants a second ­Armenian genocide. How much did they pay you traitor? I guess stabbing SYRIA in the back with that surname is the best of telling the world you’re for sale, right?” Loussikian is of Armenian descent, in case that genocide reference seemed weird or something.

“If people like [Loussikian] wage war on our post-colonial homeland then I will wage war against them,” Tharapell said at the time. Tharrapel’s initial outburst was in defence of his friend, famous Bashar al-Assad fan Tim Anderson, with whom he traveled to North Korea.

Tharappel graced Honi Soit‘s pages again yesterday, responding to questions about the badge he wore (very recently) with a Yemeni Houthi (Ansar Allah) slogan, which — translated from Arabic — reads: “God is the greatest, death to America, death to Israel, curse on the Jews, victory to Islam”.

“I wore the badge for its symbolic meaning, not its literal meaning,” he told them. Anderson, for his part, defended Tharappel, saying he is a “great friend of Syria” being attacked by “Zionists”.

Honi Soit‘s editors told Crikey they stand by the decision to publish both Tharappel and the piece more specifically: “The newspaper regularly publishes work by post-graduate students, and even by students who are not at USyd”. When asked if they knew about Tharappel’s history, and whether that affected their decision to publish his work, they said:

“Our team considers a number of criteria before approving a pitch. These include whether an article is relevant to USyd students and young people, whether it adds something to the discourse it belongs to and whether it is original. No pitch must satisfy every criterion, and each editor may have different reasons for approving a pitch. The majority of editors felt that Tharappel’s piece met some of our criteria. This does not reflect whether perspectives conform to the political opinions of editors.”

North Korea or not, travel writing is nearly always a mess of political bias

I was never a fan of the abolishment of compulsory student union membership and fees that Howard implemented.
This lot running USyd’s Honi Soit have changed my mind.
The University should cut all their funding after this. What a disgrace

Such is my principal criticism with the electorate of Australia. In general it has read fuck all and experienced less but is enamored of MSM news or The Guardian at best. The result is a congregation of knee-jerkers that react like a Paloved dog when exposed to standard stimuli.

It may be of interest to note that there are a number of former US servicemen from the Korean War who have lived there for the last 60 odd years. Most have senior children who have visited the USA.

An assessment of North Korea cannot be undertaken in a paragraph. Suffice to observe that President Xi is coordinating the negotiations with Kim and Trump with a view to bring possible unification with the South. Some major initiatives have been undertaken in this regard to date.

What the fuck is a Paloved dog?

Short Answer : me being lazy. I write (only) off the ‘top of my scone’ for Crikey.

Longer Answer : Take a look at the psychological experiments that Ivan Pavlov
undertook with dogs. An external stimulus (e.g. a sound) would effect a particular response in expectation of an event.

Its all in Wikipedia and has applications ranging from teaching to marriage guidance to politics. The ‘foundation’ school is known as Behaviourism.

Apart from the obvious, as clarified by Kyle, perhaps it could be thought of a a traditional korean pavlova, with puppy instead of strawberry?

I thought Jay’s writing was articulate and insightful — the criticism stems from Western liberal hysteria. These ‘offended’ are offended that this got published. How’s that for liberalism. One can be an opponent of North Korea and still find it a good read.

My son, who goes to Sydney Uni, told me about this piece.

For him it wasn’t so much the inflammatory nature of the piece, or the likelihood of having been chaperoned to very specific parts of NK, but it did provoke discussion among the politics class (an actual class studying politics, not a political class)

The interesting thing for him was to ask the question ‘what do we really know about North Korea’. The answer is pretty much nothing. Every piece about them has an angle already attached, and serves a political purpose, just like the piece in question.

Yes, of course it’s balls, but by how much? I don’t know, and I’m never likely to get a real feel for it. If the two Koreas unite then it might come to pass that we really find out. They are undoubtedly less well off, and more repressed explicitly, but how does the average Joe (or Kim) find it.

For once I find myself agreeing with Kyle Hargraves. (shivers down spine)