What drought? The relief fund that’s overflowing with farmers’ cash

While NSW and Queensland are apparently gripped by drought, farmers are pouring billions into a taxpayer-funded drought resilience scheme.

A taxpayer-funded scheme to enable farmers to set aside funding for drought years has hit record highs despite the drought and taxpayers pouring hundreds of millions of dollars into propping up farms.

The Farm Management Deposit Scheme was established by the Howard government in 1999. It allowed farmers to effectively shift revenue from good years to bad years by placing pre-tax income into an FMD account, deferring any tax liability into years with lower revenue. That means farmers pay less tax even when they have a bumper crop or prices are high. The purpose of the scheme, however, was to encourage farmers to put aside income for drought years. It’s the kind of drought resilience policy that bodies like the Productivity Commission have long called for: encourage farmers to prepare for inevitable drought years rather than receiving handouts from taxpayers, which reward farmers who have failed to responsibly manage their properties.

Things changed in 2016: the appeal of the scheme as a tax minimisation vehicle increased markedly following changes by the Turnbull government. The cap was doubled to $800,000, the scheme was made more liquid, with farmers able to draw on funds in less than 12 months if there is drought, and banks were allowed to use the funds as offset accounts against other loans. Now taxpayers are foregoing revenue not just so farmers can move their income into lean years, but so they can subsidise loans.

Banks were initially reluctant to offer offsets, but recently the Agriculture Minister David Littleproud gave the banks a serve and — exploiting their willingness to try to use drought relief to improve their battered images — demanded they start providing them. So despite hysteria from the media and politicians about how horrendous the current drought is, this June saw a new all-time record level of deposits: $6.6 billion. 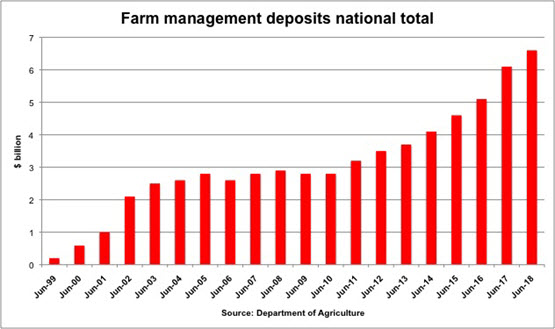 As the data shows, the government’s changes turbocharged deposits, especially when coupled with superannuation changes that reduced the tax minimisation appeal of super funds. And the allegedly catastrophic drought has had no apparent impact, unlike a decade ago. Indeed, the two states that are notionally the worst-affected by drought, NSW and Queensland, have seen the highest rate of growth in deposits — 60% and 67%, respectively — since 2015. In contrast, during the Millennium Drought, NSW deposits fell three consecutive years between 2007 and 2010, and didn’t recover to 2008 levels in Queensland until 2012. 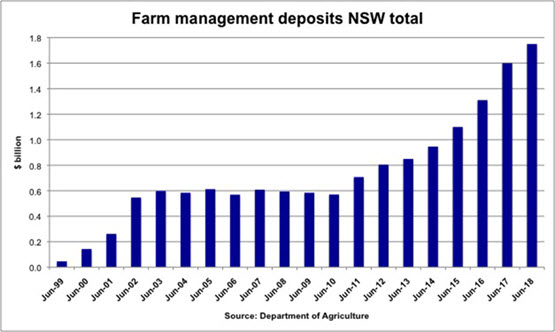 The scheme, ostensibly to enable farmers to fund for themselves during drought, is now just a tax minimisation lurk for farmers while taxpayers dole out huge amounts of drought relief.

Who exactly are these farming wives that the press manage to film in hysterics during Abbott/Turnbull/Morrison visits? Are they people who didn’t deposit into the FMD because of mismanagement or are they farming such marginal land that there is no money even in the good times?

There used to be attention paid to the long term rainfall distribution and it was clear which areas could support farming in the cyclical droughts. This now seems to be ignored and government is expected to support farming where it is only viable in the wet times. How about a strategy for the farming industry?

I can’t wait to see how Her Majesty’s plenipotentiary for drought/recovery applies his well honed retail therapy skills to this morsel.

Gosh, I don’t really understand this. Can there really be farmers who are paying money into this fund to (legally) minimise their tax but then also saying they don’t have enough money to buy feed for their cattle / support their crops? I feel like I’m missing other information here. Surely that can’t be the case or am I just being naive?

You wouldn’t even need to own a tractor..