Alan Jones has apologised for using the n-word on air yesterday while talking about political moves to block Peter Dutton's bid for the prime ministership.

Alan Jones yields, The NT News goes off, The West Australian changes its mind on Bishop, and other media tidbits of the day.

Alan Jones apologises for racial slur. Alan Jones has apologised for using a racial slur on-air. The 2GB broadcaster, talking about political maneuvers to block Peter Dutton’s move on the prime ministership said, “The n***** in the woodpile here, if one can use that expression, and I’m not going to yield to people that tell us that certain words and language are forbidden.”

But yield he did, tweeting on yesterday afternoon an apology, and again on air this morning. “I used an old and offensive figure of speech that I regret saying,” he tweeted. 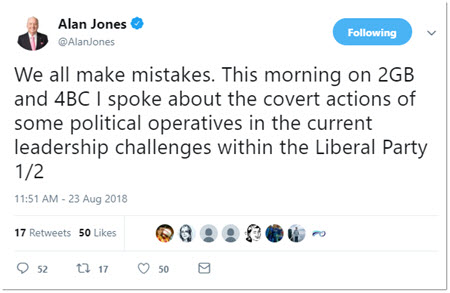 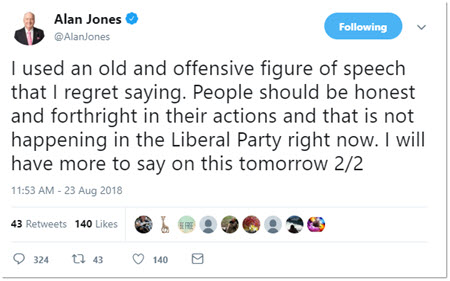 “Nothing short of Disgraceful”. For the first time this week, Darwin’s newspaper the NT News has covered the crisis in Canberra on its front page. Instead of playing into the drama of the contest, as the majority of the country’s metropolitan papers have done today, it echoes the majority view of the electorate, saying: “Territorians, like all Australians, have had enough of politicians putting their own self-interest ahead of the people they are elected to represent. The events in Canberra this week are nothing short of disgraceful.” 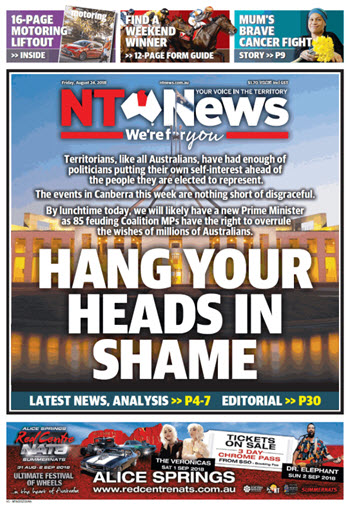 Changing tune. Yesterday Crikey took a look at how the nation’s newspapers were editorialising about the leadership crisis, including The West Australian’s call for Prime Minister Malcolm Turnbull to step aside for Scott Morrison. Today, however, the paper has changed tune on the news that West Australian Julie Bishop is in the running for the leadership:

Yesterday, The West Australian backed Treasurer Scott Morrison against Mr Dutton in expectation of a two-way Liberal leadership contest … (Julie Bishop) is one WA Liberal who can hold her head high, having been loyal to Mr Turnbull … Ms Bishop worked hard to get the Government to fix the GST and understands how vital it is for WA. Her colleagues, in particular every WA member, must back her.

Front page of the day. Time has published another cover dedicated to US President Donald Trump. 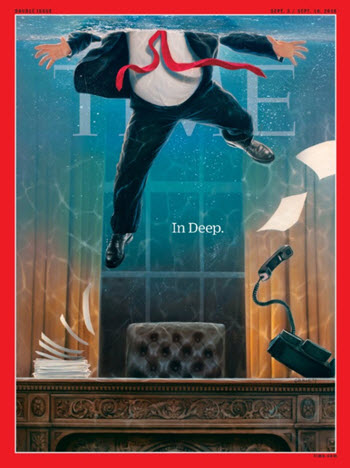 It’s the third in a series from the news magazine, which it said was intended to reflect the chaos in the White House since Trump’s term began: 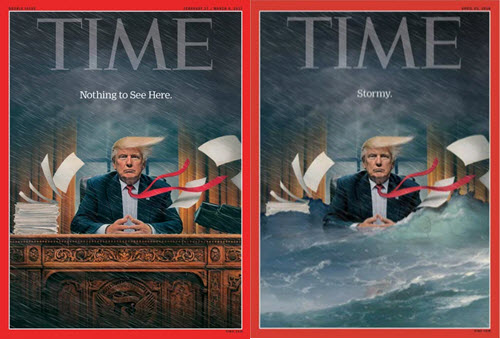 China correspondent refused visa. BuzzFeed’s China correspondent Megha Rajagopalan is moving to a role with the website in the Middle East after the Chinese Government refused to extend her visa. Tweeting about the change, Rajagopalan, an American journalist said: “It is bittersweet to leave Beijing after spending six wonderful and eye-opening years as a journalist there. In May, China’s Foreign Ministry declined to issue me a new journalist visa. They say this is a process thing, we are not totally clear why.”

The Foreign Correspondents Club of China said in a statement it was trying to get clarity on why Rajagopalan was refused a visa: “We find this extremely regrettable and unacceptable for a government that repeatedly insists it welcomes foreign media to cover the country.”

Rajagopalan is an award-winning journalist for her work on surveillance in China and repression of minorities.

US viewers turn off Fox. There has been a significant change in US cable news ratings as the pressure rises on Donald Trump, and it’s not good for Rupert Murdoch and his Fox News channel. Tuesday and Wednesday night, MSNBC, a liberal cable news channel, has topped prime time ratings, relegating Fox to second place on big news days for the Trump administration. MSNBC topped primetime with 2.75 million viewers, followed by Fox News’ 1.83 million and CNN third with 1.32 million. All up, that’s more than four million people watching channels generally regarded as sceptical of Trump, against the 1.8 million watching the strongly pro-Trump Fox. — Glenn Dyer

Nobody in W.A. ever gets anything other than Liberal Party propaganda, all the media is controlled by either Murdoch or Stokes. neither of them would support Labour in a fit.
Further the W.A. media tend to ignore National issues in favour of “village pump”style reporting.
The recent attack on the current Lib leader Nahan was surprising, more so as he is also an ex IPA shoe in.
have they got a more compliant ( is that possible?) candidate?

sooner or later the share holders of news corp are going to realise how much murdochs right wing power plays are costing them in lost revenues as people switch away from the rabid ravings spewing out on a daily basis, people want news not rabid propaganda and thats why murdochs media is in so much financial trouble around the world.

Unfortunately for the News Corp shareholders, the dividends are crap. The only way that shareholders can make any returns is by selling.

It is nothing less than a stomach-churning soap opera of self-interest.

Yep, The West Australian was also very comfortable with the Barnaby Joyce expose as ($200,000) a front page news.

If Alan Jones wants to have a fulfilled life, he should just come out. Forget about the anger, just admit who you are.