ABC radio presenter has Ali Clarke brought attention to the abuse broadcasters often receive. Plus other media tidbits of the day.

Anonymous abuse takes its toll on broadcasters,  former producer labels Brussels sprout incident “abuse”, the media continues its meltdown over Turnbull v Dutton, and other media tidbits of the day.

The toll of anonymous abuse. ABC Adelaide radio presenter Ali Clarke brought attention again yesterday to the abuse broadcasters often receive online. Clarke broke down in tears on air after a text criticised her interviewing technique, prompting news stories in local paper The Advertiser and on the ABC. She was on-air and monitoring the text line when one came in accusing her of conducting a “pitiful interview”. She told The Advertiser: “It was just one of those things, (there were) lots of interviews in a row and for whatever reason it got under my [skin]. This isn’t about people disagreeing with me — people disagreeing with me is great. It was pretty personal and the words that they used were pretty rough … when you get this constantly, some days you can take it better than others.”

It follows an increasing number of media personalities sharing the criticism and abuse they receive, including ABC TV presenters Virginia Trioli, Julia Baird and Leigh Sales.

Public feedback is part of the job and our frontline employees will be continually assessed on their performance. But sometimes you need to draw the line. Particularly in relation to anonymous online attacks or trolling which, unfortunately, are an increasingly common dark facet of online exchanges. Personal abuse, threats and harassment, are not acceptable. Under any circumstances. ABC employees have the same right as every other person in the workplace to feel safe in their work environment.

Brussels sprout gate. Former Studio 10 executive producer Rob McKnight has spoken for the first time about the Brussels sprout incident that has become a punchline in stories about the struggling program. On his new podcast TV Blackbox, McKnight said the incident, where Denise Drysdale allegedly threw Brussels sprouts at her fellow presenter Ita Buttrose during a Christmas shoot, was an “assault”, and more details would emerge in his unfair dismissal case against Ten.

There is something about all this that has really upset me. I know the Brussels sprouts incident is a joke to everyone … Ita Buttose was assaulted at that shoot. It wasn’t a Christmas party, it was a shoot, we were in a professional situation recording a Christmas video clip. 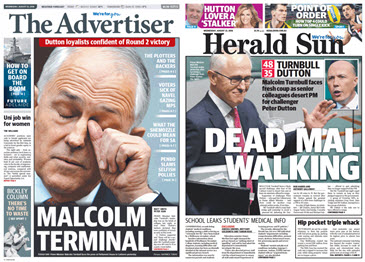 And The Sydney Morning Herald has gone so far as to editorialise in favour of an early election: “The Herald has a long record of opposing early elections and backing fixed terms for parliaments but the situation in Canberra is so dire the best option is for Prime Minister Malcolm Turnbull to go to the voters early.”

Glenn Dyer’s TV Ratings. Nine’s night thanks to The Block (1.33 million nationally) and True Stories with Hamish and Andy — 970,000 for the fresh episode and 738,000 for the repeat that followed. Nine won total people, main channels and the demos. End of story.

And we know Malcolm Turnbull retained his leadership, so who among the TV networks did well covering that? News Breakfast on the ABC saw 20,000 or so extra viewers with the special averaging 208,000. Sunrise and Today saw no discernible boost at all — in fact Today had 351,000 national and a low 226,000 metro viewers. Sunrise had 448,000 nationally and 263,000 in the metros. Both were lower than Monday’s ratings, whereas News Breakfast saw a rise. Read the rest on the Crikey website.

You didn’t show the NT times front page, I’m sure it would have some croc related slant to the leadership tussle, if it acknowledges it at all.

If these “ABC media stars” want to use their elite positions to project and air their personal political smalls (playing favourites for one side and impugn others – according to party), why shouldn’t they be judged?
If they could use the same approach across the spectrum – objectively, impartially and professionally, no matter the interviewed – maybe they’d get that respect they think they deserve?

Leigh for Sales like Uhllman before her, uses the public broadcaster to project her bias as a job interview for her next position with Murdoch.
At least when Murphy does this it isn’t on the taxpayers wedge.
As long as criticism of Sales is limited to her performance on air then it’s fair enough.

I have to say that someone being told they conducted a “pitiful interview” doesn’t really qualify as evil abuse in my book. Are movie reviewers bullying abusers when they gave a crappy film 1 and a half star and say it’s a dreadful production?

There’s plenty of dreadful abuse on Twitter and social media, I’m not sure they picked the best example to get high and mighty about.

Plenty of these media types conflate the ad hominem personal abuse they get (which is bad) with criticism of their actual performance in the job and actual mistakes (which they would do better to take on board).

It seems that most meeja hacks can’t be bothered to do sufficient research & prep when dealing with issues and provide nothing more than a free kick for pollies to lie & dissemble then whine when criticised, let them do something more useful like pick oakum.