Is Dutton popular enough with voters to save the Coalition?

Malcolm Turnbull may have suffered a massive setback in recent polling. But it had nothing to do with the NEG backflip. And Turnbull is still more popular than any other would-be PM in the Coalition.

One of the many over-familiar features of the Liberals’ present leadership crisis is the role played by a well-timed opinion poll in cranking things up a notch.

Hard on the heels of Friday’s panicked back-down on the National Energy Guarantee came an Ipsos poll for the Fairfax papers that recorded a blowout in Labor’s two-party lead from 51-49 to 55-45, together with a 10% increase in Malcolm Turnbull’s disapproval rating.

The proximity of these events gives a misleading impression of cause and effect, but the poll was in fact conducted between Wednesday and Saturday, meaning any damage it recorded must have been suffered by the government beforehand. Indeed, similar movements in Turnbull’s ratings in last week’s Newspoll suggest the collapse in his personal standing predated the NEG crisis, and can instead be traced to the disappointments of the Super Saturday byelections on July 28.

However, Newspoll differed from Ipsos in finding the Coalition all but holding its ground on voting intention, which seemed to follow Turnbull’s downward turn only with last week’s outbreak of disunity.

As such, the push for Dutton looks as much a case of polls being led by a leadership challenge as the other way round.

The disconnect between the now-concrete Dutton-for-PM project and how the public sees things is illustrated by the chart below, recording Essential Research’s preferred Liberal leader polling since Turnbull became Prime Minister in September 2015, together with a trend measure of Turnbull’s approval rating. 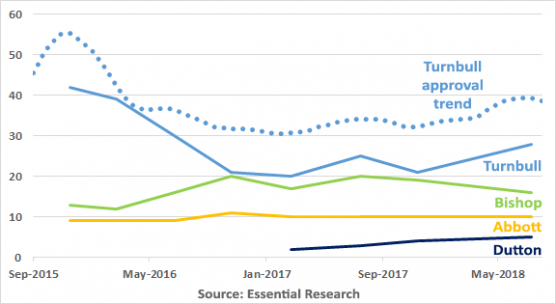 Turnbull’s preferred leader scores have moved in tandem with his variable approval ratings, but he has consistently held the lead since the start of his prime ministership (and indeed since Tony Abbott’s position collapsed after his government’s disastrous first budget in 2014).

Separating Turnbull from the conservative insurgents are daylight and Julie Bishop, who has been the alternative Liberal leader of choice since Abbott was dumped.

What has remained for Abbott and Dutton can only be described as a rump: a constant 10% or so for Abbott, and barely half that for Dutton since the pollster first felt it worth including him as an option in March last year.

In explaining all this away to potential party room supporters, Dutton boosters will be leaning heavily on the tactical significance of his home state of Queensland and its extravagant endowment of marginal seats — not least Dutton’s own.

The argument that a home ground advantage in Queensland would be a handy asset can be made with reference to Kevin Rudd’s performance in 2007 (albeit that the magic eluded him in 2013), and also to Labor’s showing in Western Australia under Kim Beazley in 1998 and 2001 – its two best results there in the past three decades.

The other aspect of the Coalition’s Queensland problem is One Nation, whose strength was largely responsible for their humiliating failure to crack 30% in the Longman byelection.

Whatever else may be said of Dutton, he is well positioned to win back these voters, and to add some ballast to the demoralising Coalition primary vote in doing so.

However, none of this adds up to a compelling argument for change: any Queensland dividend from Dutton must be balanced against his pronounced unpopularity in the southern states, and votes lost to One Nation were largely coming back as preferences anyway.

Ultimately, the case for change can only rest on faith in the destructive power of a combined Dutton-Abbott assault on Labor – a far more dubious proposition in government than it might have been from opposition.

What do you think Dutton’s chances are with the electorate? Write to [email protected] and let us know.

I suspect “his pronounced unpopularity in the southern states” may include any part of Brisbane south of his electorate. Campbell Newman showed that radical conservatism doesn’t even fly in Queensland as an electoral strategy.

I’m a Qlder, I very much doubt Dutton is a more popular option as PM, most could not care less for either of them or Shorten for that matter. Politicians are all despised as untrustworthy liars, as so often they have proven this to be the case.

I have no doubt that the continual failure to actively address and where necessary punish banking and finance sector avarice, and the failure to not only scrap tax cuts to big business but pursue them for taxes owing; are some of the leading causes of voter abandonment of the two main parties.

Which ever party gets a leader who finally realizes the need to govern in the majority populations interest is going to win by a landslide. The world has changed few see the benefits of their work realized in their pay, or any benefits of outsourcing and privatization in what should be essential government services.
No more baleouts next time nationalise the banking /finance/ energy/ aviation sectors. No more sell outs, let them buy in at a premium with no rights of influence over operations.

In answer to the question – NO. Voters want a more ‘liberal democratic’ government, not a right wing ideologue as PM. Dutton will preside over a rout of the LNP at the next election.

Paul Guy
Reply to  Been Around

Spot on BeenAround. Dutton isn’t popular in his own seat, he’s on a paper thin margin, and the margin gets smaller every election.

duddon and turdy fighting over the wheel in the titanic, it doesn`t matter who wins, the iceberg is dead ahead.

He has a passing resemblance to Keating and non of his intellect or political smarts. A political disaster can be turned into a well deserved catastrophe if he takes the Lib leadership

A passing resemblance??? What, a politician. Looks more like that Benito bloke that tried to make the trains run on time.

He bears more than a passing resemblance to a potato…..not Keating. Guy couldn’t even make it to retirement as a Queensland cop. So just another failure at life ending up at the tax payer funded feed trough.

Would almost be nice to see the Conservatives throw up yet another Prime Minister that can lose his actual seat. Would be quite a laugh riot.

Well I guess they used to say Keating looked like an undertaker, so maybe Dutton is the corpse? He has none of Keating’s sharp wit an intellect and certainly none of his delivery. I think someone on The Insiders (last Sunday) said that if Dutton’s the answer, the question is crazy.

I always vote the biggest racist last on all my ballots. That’s usually Hanson or any of her mob.

This year, no one could possible beat Dutton for the last position! Let’s hope after the next election he’s an MP without a seat. Really, who wants an ex cop running the show ?? Oh yes, if Dutton is the answer, the question is more than crazy… Bottom of the barrel

yeah sure a passing resemblance to Keating without the breadth of knowledge, instinct for fairness, equity, wit, or intelligence. Do you just mean they can both be vicious? Well yes but Dutton is vicious as in Abbott is a bully – that is all they are.
If Australians would even contemplate him – part from those people who supported Senator what’s name last week of course – we are all in deep deep trouble.