A much anticipated lawsuit has been brought against Fairfax by former soldier Ben Roberts-Smith after allegations of bullying and violence were printed in Fairfax papers.

Fairax gets sued by Roberts-Smith, The Sun Herald has a loose interpretation of Latin, Jill Stark details her meeting with fate (aka Rita Panahi) and other media tidbits of the day.

Ben Roberts-Smith sues Fairfax. Decorated soldier and Seven executive Ben Roberts-Smith has lodged defamation action in the Federal Court against Fairfax and journalists Nick McKenzie, Chris Masters and David Wroe over its series of stories alleging bullying and violence. Roberts-Smith strenuously denies the allegations, published as part of a report on a department of defence investigation.

The Australian — which has played a key role in Roberts-Smith’s media management — reports the defamation action relates to three stories, two published in June and one earlier this month. He’s suing for aggravated damages which are not capped, as confirmed by the Rebel Wilson case.

Sun Herald’s humble pie. Fairfax’s London-based reporter Latika Bourke rolled out another of her Jamie Oliver “exclusives” in yesterday’s Sun Herald. Her stories are based on interviews granted as part of Oliver’s promotional tour for his newest cookbook — she “travelled to Italy as a guest of Jamie Oliver” for stories for Good Food and the news section. Early editions of the paper used an unconventional interpretation of the Latin phrase “mea culpa” when taking the angle of Oliver blaming Sydney’s lock-out laws for the collapse of his business, as pointed out by Fairfax cartoonist Cathy Wilcox on Twitter: 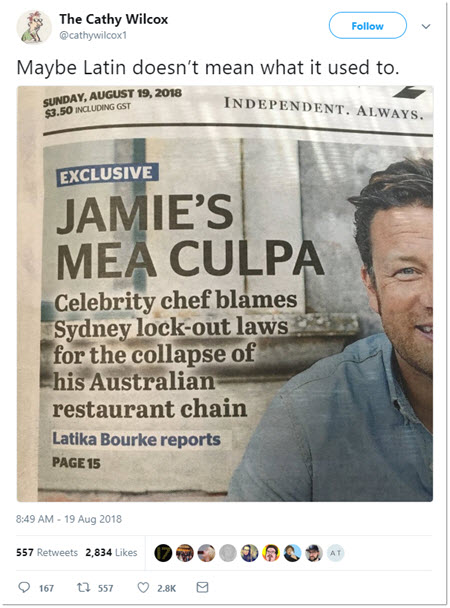 The front page clanger was revised for later editions of the paper, changed to “Jamie’s humble pie”: 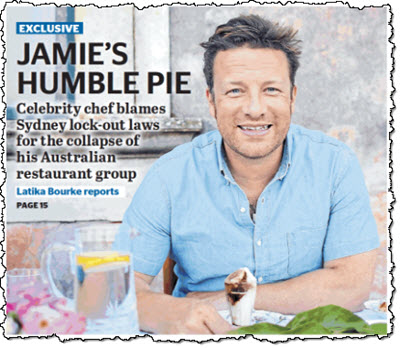 Good feud guide. Former Sunday Age writer Jill Stark is publicising her new book too, a memoir, publishing extracts and conducting interviews. Stark has also been an online sparring partner for conservative News Corp columnist Rita Panahi, and wrote about meeting her in real life for the book. Inside Story has published an extract covering that encounter:

When I told friends who I was meeting for a drink, they all asked the same question: ‘Why the fuck would you do that?’ They were right to be sceptical. I was about to break bread with a woman who had publicly described me as a ‘social justice warrior straight out of central casting.’ She routinely dismisses people with views like mine as ‘frightbats,’ ‘feminazis,’ and ‘comically deluded, fringe-dwelling, virtue-signalling lefties.’ I was nervous. 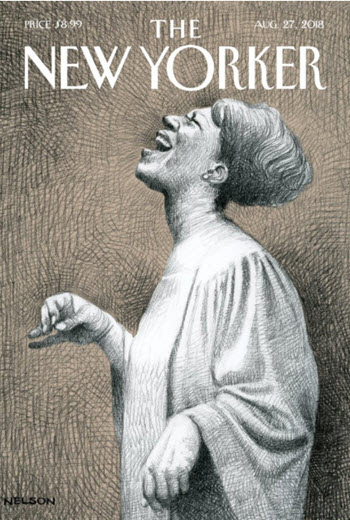 Languages evolve so meanings change over time, maybe just not this much.