The ABC and The Australian have been trading barbs once again, with public criticism of each other's stories.

The ABC vs The Australian, the Queen of Soul reigns over UK papers, the newsreader haircut explained, plus other media tidbits from the day.

Good feud guide. The Australian, sticking to its usual editorial line, has published a couple of stories this week criticising reporting published by the ABC. Aviation writer Robyn Ironside wrote yesterday about Jetstar’s criticism of Ashlynne McGhee’s report about flight attendants being underpaid. And on Tuesday, an odd story by Andrew Burrell detailed online abuse aimed at Australian journalist Paul Garvey by Ross Smith. Smith appeared in a Four Corners report in April, or as the Oz put it, was “star talent in a recent ABC Four Corners investigation”.

The ABC has responded by posting its full responses to the Oz, saying the paper didn’t “fully reflect” the ABC’s position. “It is worth putting the complete responses on the public record, so readers can be better informed on the issues and allegations raised,” it said.

Remembering Aretha Franklin. The US papers hadn’t released their front pages by our deadline today, but Aretha Franklin has been remembered on all the UK’s front pages today (even a mention in the Financial Times). Here’s a selection: 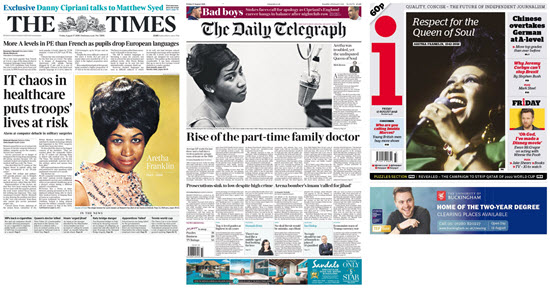 Nine wins NBL rights. Nine has announced a partnership with the National Basketball League (NBL). As official Australian broadcaster, Nine will air two games per round on its digital channel 9GO!, simulcast them online and offer catch-up services for all games in the season after they finish. The deal runs for three years.

How to look like a newsreader. Newsreaders — especially the women — tend to have a very similar look. And a lot of that is down to the hair. InStyle has gone deep on the news anchor hairstyle, including a survey that found 95.8% of female US newsreaders had the same cut, and looked at how it’s changing:

What are the so-called rules of on-air hair? Anchors, reporters, and industry experts interviewed for this piece laid them out: Wear your hair down, in a smooth style that hits at the collarbone or above. Updos and complicated styles are a no, as are drastic color changes. Youthful appearance is key (better dye those grays away!). A bit of wave is okay (and increasingly popular at some stations), but ringlets and kinky curls are not.

Glenn Dyer’s TV ratings. Forget about the results last night (Seven, Nine and Ten can all claim something from the night) — the big story was the drubbing Seven’s The Front Bar handed out to the Nine Network’s AFL Footy Show hosted by Eddie McGuire. In footy parlance it was “a shame, not a game” as Seven’s modest Front Bar doubled Eddie’s show’s viewer numbers in Melbourne and recorded its highest ever figure.

The Front Bar averaged 281,000 viewers, Eddie’s AFL Show 137,000. Three weeks ago The Front Bar almost doubled The AFL Show’s average (274,000 to 139,000.) Last night, it did it again and was also the third most watched show in Melbourne to boot. And it was a similar story in the other AFL metro markets, Adelaide and Perth, where The Front Bar easily out-rated Nine’s effort with 105,000 viewers between the two to 60,000 for the Nine show. Read the rest on the Crikey website.