Why was there such a lack of process around the handout to the Great Barrier Reef Foundation? Take a look at the books ahead of the budget.

During preparations for this year’s budget, the government found itself with a problem no one had dealt with since 2008. It was awash with cash.

Courtesy of commodities prices, extra tax revenue was rolling in: in the 2017 budget, revenue for 2017-18 was forecast to be $444 billion. In December, that was upgraded to nearly $449 billion. But in March, actual revenue was tracking $5 billion ahead of that forecast.

And because of strong jobs growth and Mathias Cormann’s discipline as Finance Minister, he and Scott Morrison had another bonus: spending was down. The 2017 budget forecast expenses at $464.3 billion. That increased a little in December but by March it was tracking $3 billion below estimates. Courtesy of good luck and good management, Cormann and Morrison had bundles of extra cash.

Much of that would be directed to the deficit. MYEFO had lowered the forecast 2017-18 deficit about $6 billion to $23.6 billion but they would cut it further to $18.2 billion, the lowest since the Howard years. That still left some money to play with. But there was a catch: it had to be spent before the end of the financial year, even if it wasn’t announced until budget night. Wouldn’t it be good if there was some high-profile, popular cause that the government could throw some money at — but preferably one run by solid, dependable people? Business people, perhaps?

Enter the hitherto-little known Great Barrier Reef Foundation, run by a board with no less than four people with connections to the Business Council, including the current chair and one of his predecessors.

The government has been very cagey about whose idea it was to sling a wad of cash at the GBRF. As part of the budget process, departments put forward spending proposals, and of course there are ongoing programs through which bodies come to the attention of bureaucrats and ministers’ offices. The GBRF had sought funding under a small reef management program in March, during which it had provided information about its activities and structure; this was later portrayed as the appropriate “due diligence” for handing over nearly half a billion dollars. But one way or another, someone, likely in Josh Frydenberg’s office, perhaps liaising with the Prime Minister’s Office, put them forward as a good target for funds.

But establishing a new grants program would take time. Criteria have to be developed; evaluation programs put in place, administration staff found, Requests For Tender called — and the money had to be disposed of by June 30. Luckily there was an existing vehicle through which the money could be channeled without the need for the rigmarole of a new program: the Reef Trust, set up by the Abbott government with the Queensland government to attract private investment to reef programs.

“The Reef Trust can receive and disburse funds from government and non-government sources, and broker partnerships and collaboration for the Reef,” says a blurb about the body — making it ideal for the government’s purposes, since it wanted to hand over the money without wasting time with RFTs. The GBRF would “partner” with the Trust to work with the private sector, instead of bureaucrats and scientists, using $440 million. Clearly such a large amount could not be spent quickly — it would take several years for such a sum to be spent, especially if the GBRF was going to seek private funding as well.

So the Prime Minister and Frydenberg met secretly with GBRF chair John Schubert on April 9 to tell him the GBRF would be receiving the money. But the money couldn’t be allocated over six years. It couldn’t even be allocated in 2018-19, despite being announced in the budget. It had to go out before June 30. That meant the partnership paperwork between the Reef Trust, in Frydenberg’s department, and the GBRF, had to be completed by late June at the latest. The GBRF only has a handful of full-time staff, so working though the agreement was going to take weeks. They managed it in the nick of time: the agreement was signed off on June 27. Phew. The entire sum was then paid to the GBRF within 24 hours. The books could be ruled off for the year.

“The Reef Trust operates with the highest levels of accountability and transparency,” the blurb from Frydenberg’s department tells us. Indeed. 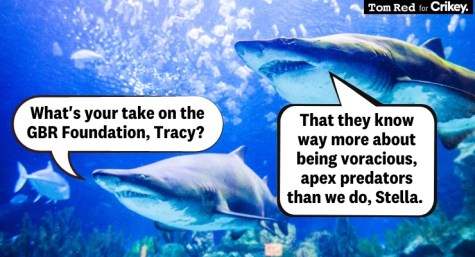 Dodgy deals, broken promises: reef outfit shows how the private sector does it

This feels a bit like the Josh Frydenberg version of events, especially the following paragraph:

“Wouldn’t it be good if there was some high-profile, popular cause that the government could throw some money at — but preferably one run by solid, dependable people? Business people, perhaps?”

This would make the intention to throw money at the reef legitimate, and the speed and lack of formal processes just a matter of budget management and speed/efficiency. “They didn’t follow red tape processes” isn’t a smoking gun. It could even be a positive for a government which doesn’t have a lot of examples of “can-do” to point at.

I mean, they’ve never explained the $30m to Foxtel which looks like nothing so much as payment to Rupert for services rendered, so don’t say this is a lefty conspiracy theory. These guys are guilty until proven innocent given their track record.

All I know is that if me and me mates got up to these kind of capers with other people’s money we’d be holidaying with all the other old lags.

A high profile good cause they could have used the money for was paying down the debt.

A few years ago the national debt was evil and had to be eradicated. Now, not so much.

You heard them. It was just retail politics, like everything else. When it helps them, they talk of the “debt”. When they need money to throw somewhere to their cronies, it becomes irrelevant. Please understand. “the debt” is a hangover from the days of the gold standard for currency. That was abolished and we have been using fiat currency for around three decades now. Peter Costello even knew that and sold off the gold reserves (for a song to some mates – no tender there!). Yet, they trot out the “debt and deficit” bullshit and the “need to balance the budget” etc. whenever they want to cut expenditure on items beneficial to the general public. This is all forgotten or “excused” when the money has be doled out to their “beneficiaries”. By now you would think most people would have got it, but it is hard because they keep pushing the line that the govt. is like a household or business and “must live within its means”, even when it issues the currency that determines its means, and the only real brake on spending is inflation. In case no one has noticed, they have blown out the deficit but inflation is at an all time low, which is why interest rates are low.

Excuse me, I seem to have lost my debt and deficit disaster. It went missing around the same time the Debt truck/Bus was stolen from Joe Hockey’s shed.

Remember Howard’s Foreign Debt truck? That went missing about the time he tripled the Foreign Debt left by Labor.

Librorts Party are very good at burying their past, but then they do have the help of 70% of the print media, & a solid 75% of the TV media, firmly on their side.

No mention of the fact that the GBRF will not be as efficient at distributing research money as doing it via the usual channels, like the ARC.
What has the Liberal Party got against the ARC?
It’s probably as trivial as not having heard of it. But most likely they want us to pay for greenwashing the Business Councils grubby faces.
And, probably through sheer fatigue at the endless cack-handedness and bad-faith dealings of this government, not much has been made of the massive about face this vast sum represents: remember when they were fighting UNESCO over endangerment listings?

Re UNESCO – see my comment on the next page.

Oh Bernard, you just can’t come out & be honest about this government, can you? A combination of good luck *and* good management? Care to give us any examples of the latter? *Official* unemployment rates have been stuck at 5.5% or above since 2014, in spite of declines in participation rates since that same period. Commodity prices are volatile & beyond the control of the government-so cannot be relied upon as a deficit reducer. I see no improvement in tax compliance from the top end of town, we see profligate spending within the Departments of Home Affairs & Industrial Relations, massive blowouts in the costs of outsourcing & consultancies, tens of millions of dollars gifted to Murdoch without so much as a list of milestones…..I could go on, but won’t. This government is throwing away money it hasn’t got & is banking on wage rises they oppose, & pushing the poorest into total destitution, in order to dig themselves out of that hole. Yet they also want to condemn future governments to permantly increasing deficits with their stupid tax changes-all at a time when jobs growth has flattened out & commodity prices have nowhere to go but down.

So seriously, Bernard, stop trying to put lipstick on a pig….its just getting embarrasing.

I suspect this is one way of getting donations to the Coalition to fund the next election. Having spent nearly $2m of his own money last time, I am sure Mr Turnbull does not wish to put his hand in his pocket again. With so much money sloshing around with his mates at the GBRF, a little hand out to the Coalition will do the trick. And they had a luxury holiday as well where the only problem was that the “buggy was not able to get near the heli-pad”. What fun times to be had as Alan Ramsay used to say “Thank you taxpayer”.