Three years after a pivot to online retail, the ABC is planning to close its online stores.

The ABC shuts up shop (again), the Murdochs’ night of nights, The Honey Badger is a ratings success, plus other media tidbits from the day.

ABC to close online retail business. The ABC is planning to close its online store and in-store retail centres, where it sells ABC products including books, DVDs and other merchandise. In a statement about the proposal, ABC Commercial General Manager Andrew Lambert said there had been a decline in sales:

This proposal directly responds to the changing market, in particular consumers’ shift to digital delivery of audio and visual content. Coupled with the intensifying global competition affecting the entire retail sector, the resulting decline in physical sales means the retail business is becoming increasingly unviable.

There would be up to 16 redundancies if the proposal goes ahead. The ABC closed its physical ABC stores in 2015, for similar reasons. Then-managing director Mark Scott cited digital disruption in retail for the decision to phase out the 50 stores.

News Awards. News Corp held its annual in-house awards last night — similar to the Walkleys but without ABC or Fairfax journalists competing to take out the top gongs. The Daily Telegraph‘s Sharri Markson was awarded the Sir Keith Murdoch Award for Excellence by her ultimate bosses Rupert and Lachlan Murdoch. 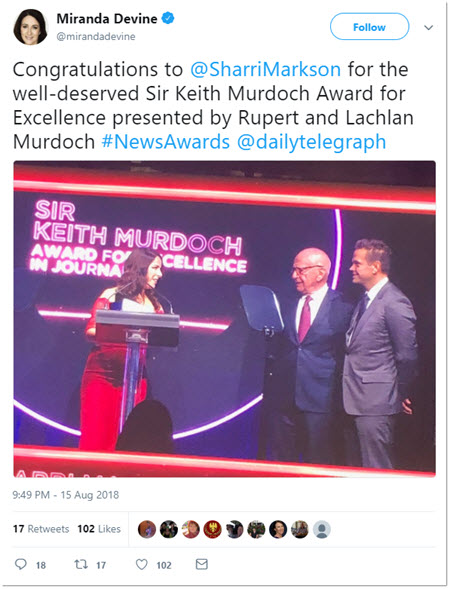 The Australian’s popular podcast The Teacher’s Pet won the innovation award, Ellen Whinnett won scoop of the year for chasing down Clive Palmer’s nephew Clive Mensink, and the NT News won headline of the year for recycling its Walkley Award-winning format of headline for the cricket ball tampering scandal (“Why I’ve got some sticky near my dicky”). 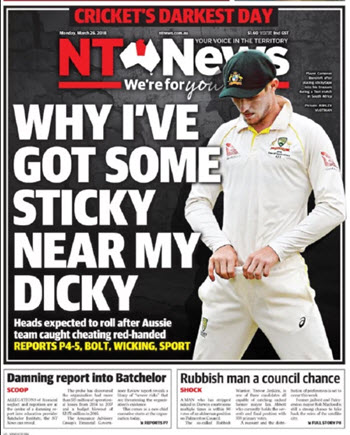 BBC drops Cliff Richard case appeal. The BBC has declined to appeal a controversial court ruling that found the public broadcaster breached Sir Cliff Richard’s privacy by correctly naming him as being under police investigation. He was awarded £210,000 in July when he won the case. The BBC apologised, but said the ruling had implications for the freedom of the press to report on police investigations. The broadcaster wrote to the Attorney-General to request a review of the law, which has already been rejected.

In an article about the case, the BBC quoted a statement from the broadcaster that appealing would be “an expensive legal cul-de-sac and one that would simply prolong Sir Cliff’s distress”.

However, it is writing to ask the attorney general to “consider a review of the law in this important area to protect the right to properly and fairly report criminal investigations, and to name the person under investigation”.

Glenn Dyer’s TV ratings. The Bachelor returned to Ten last night for its best ever start — 1.24 million nationally, 940,000 in the metros, and a solid 304,000 in the regions. That saw Ten snap up the key demos, leaving Seven and Nine to boast about how they went in total people (Seven) and the main channels (Nine).

The Bach is former rugby player, Nick “The Honey Badger” Cummins. After a weakish performance by MasterChef for Ten, the strong return of the Bach is good news. The Bach easily beat The Block on Nine which managed 1.19 million national and 823,000 in the metros, but did better in the regions with 373,000. Read the rest on the Crikey website.

if the big city people watch it that means i would never watch it ,add that to your ratings survey.it is the so called stars on commercial tv that makes me turn off,and not turn back on…………

Is it just me or does Lachlan Murdoch look like one of those earnestly nerdy but silly duffer stereotypes beloved of US sitcom writers, such as that bloke in I Dream of Jeannie, or Wilbur in Mr Ed?
On second thought, when I look again at Murdoch III’s profile, I think I must be confusing them with Bob Hope.

The Merde’och awards !!!
Anybody win anything for writing an article about Ruperts Chinese spy wife??

THe NT news was obviously trying to replicate the respect it got for “Why I Stuck a Cracker up my Clacker.”