Uh oh! Bad news, everyone. It looks like a particularly virulent strain of RDS has mutated inside of erstwhile Labor wunderkind Sam Dastyari.

Chinese whispers of his demise were, unfortunately, greatly exaggerated. After an exile slightly longer than human gestation, the self-proclaimed Labor Party “bagman” is back at it.

In an exclusive interview with Joe Hildebrand via Stellar magazine last weekend, former Senator Sam Dastyari reflected on his political afterlife. Doing his own version of the sad-clown complex, he joked about being a tight-arse and accepting perks from foreign interests. The words “sorry” or “wrong” were carefully omitted. 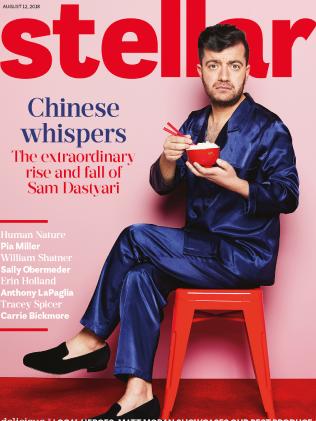 And while depression and excessive drinking are serious matters, the article proved little more than a thinly veiled plug for his imminent Channel Ten debut.

Though Hildebrand named scandal as his disease, Relevance Deprivation Syndrome is the likely diagnosis for ex-politicians of Dasher’s ilk.

Hardly a new concept, the phrase was coined by chronic sufferer, former foreign minister and Cheryl Kernot puppeteer Gareth Evans. The symptoms are startling and the patient list long. From Mark Latham to Tony Windsor, John Hewson and Jeff Kennett to K-Rudd, they are the once-weres who struggle to let go of the blue-carpet life.

Their days, once filled with ministerial cars, departmental briefings and brisk mornings at the doors, now reduced to endless hours at Aussie’s cafe, waiting to be noticed.

Clambering to re-enter the fray, they’re easy prey for journalists seeking a quick, incendiary quote. They strut into their local branch meetings like a self-anointed demi-god in moleskins, punctuating proceedings with an overly enthusiastic “hear, hear”. In the midst of a crisis, they’ll hit the phones to more powerful colleagues to offer unsolicited, and often unappreciated, counsel. Their calls are always screened.

When they roll up to a party function – a few wines deep — they scoff when name tags omit “The Honourable”. Or when they’re offered a name tag at all. While they may jostle for a return to the chamber or a glamorous overseas posting, they are the state party presidents of the future and federal council nominees for powerbrokers in a pinch. They turn up to budget night parties and no one quite understands why. And after drinking all the good red, they will not go gentle into that goodnight.

Despite all the recent criticism levelled at them, Sky News are pioneers of this emerging trend through Beattie and Campbell and Richo.

After his inevitable resignation, we may see Barnaby Joyce as the new Dr Phil. In his signature style, Kevin Rudd could knife Catriona Rowntree to become the supreme leader of Getaway: The United Nations Edition. Or Tony Abbott donning his speedos and stopping the boats in his own Baywatch.

While potentially as entertaining as he is vaguely unprincipled, Dastyari’s Disgrace! stands to be a protracted exercise in attention seeking.

But short-term political notoriety is no ticket to life-long celebrity. Despite the concerted and continued efforts of some politicians to prove otherwise, public service is a noble and worthy pursuit.

The Hawkes and Howards, who shun post-political publicity except to offer occasional sage advice or down a pint, have preserved their status as statesmen. They are the subjects of Monday night ABC specials and inspire begrudging bipartisan respect.

After years of careful and considered public contributions, they have a healthy respect for their own reputation. Moreover, after a near lifetime in pursuit of parliamentary service, they value meaningful political discourse in this country.

The example Dastyari set in his initial misdemeanours, and the one he is setting now, is cause for reflection. The easy cross-contamination of politics and celebrity serves only to cheapen the process. At a time when constituents are tuning out, we cannot continue to indulge such ego and desperation.

Politics may be the show business of ugly people but, please, don’t call us, we’ll call you.

The Masked Singer has its best night yet for Ten

With almost no competition, The Bachelor dominates the ratings

Chelsey Potter, a former Liberal staffer says ” The Hawkes and Howards, who shun post-political publicity except to offer occasional sage advice or down a pint, have preserved their status as statesmen. They are the subjects of Monday night ABC specials and inspire begrudging bipartisan respect.”

Howard inspires bipartisan respect? Only in the author’s eyes. Amazing what you can see if you want to!

You’re not a rat fetishist?

“Hey Cossy, we got all this money from the mining boom, what can we do with it? …….. I know, we can piss it up the wall for votes? We can give tax cuts so the peasants can buy a sandwich and a milk-shake, and pay their dentists, doctors, teachers and anyone else they owe with what they’ve got left over. Then we can dump Labor’s dental care program and funding for universities, because the rubes’ll be able to pay those bills themselves. Then we can bring in some middle class welfare, like negative gearing, so real estate investors can buy more real estate and outbid the plebs trying to buy a home. Then we can bring in this Dividend Imputation System I’ve been thinking about, where investors can invest in companies and get tax back they didn’t even pay in the first place? ….. Woddaya wreckin’ Pete?”
“You’re the boss John.”

Indeed, the most destructive, small-minded, sneaky, nasty little man ever to spend a night in the Lodge or Kirribilli. He was known among his Cabinet as The Evil Genius, for his ability to spin a web of lies. Much of this brouhaha about racist politics and lines in the sand and all the rest can be traced back to his racial vilification strategy in the 1980s, and his cleansing of Liberal Party moderates.
As much as the Labor Party looks stupid for ever having had Mark Latham as putative PM, the Liberal Party stands condemned for allowing an utterly cynical bigot like Howard to lead it.

The proper noun ‘Howard’ and the common noun ‘statesman’ should never be used in the same sentence. Furthermore nobody ever accused Bob Hawke of being a war criminal.

Hmmm …. having a bad day, were we? It was good of you to make a vague stab at “balance” with mentions of Kennet, Hewson, Joyce and Abbott, all now discredited even by most current liberals.

But calling Howard a statesman is sheer lunacy. He is now discredited by pretty much all of Australia, and if you still see anything even vaguely worthy of respect in him, you need some serious counselling.

I imagine this article started out as a story about Dastyari. But it ended up as a pointless and possibly embarrassing (for you) abusive rant against the labor party.

I wouldn’t include Hewson. He’s quite a thoughtful commentator now. Otherwise, I agree with Lee.