Welcome to Side View — a curated guide to new and overlooked content on politics, policy, and public affairs. This week: breeding the brave members of Space Force, geo-engineering doesn't work, and growing up with your local library.

In an era of just-in-time delivery, how is it possible that the world’s biggest corporations don’t know what human rights and environmental abuses go on in their supply chains? In fact, not knowing what’s happening in your supply chain may be fundamental to contemporary global capitalism (and apologies for recommending an article that refers to blockchain as a “gamechanger” but it’s only indirect). Moving on, I’m dubious about this but did post-financial crisis prudential rules exacerbate inequality? Doesn’t seem to fit well with the argument that it decreased inequality … And, finally, what’s behind Elon Musk’s talk about taking Tesla private?

Who’s to blame for the economic crisis facing Turkey and the brutal Erdogan regime? Some say Donald Trump but others point to the cesspit of corruption and nepotism that is the Erdogan regime. Turkey ranks 81st on Transparency International’s Corruption Perception index; a recent report warns of a “high” or “moderate” risk of corruption in every area of Turkish public life. Perhaps Erdogan can jail Turkey’s economics profession? Meanwhile rampant corruption in Iran (it’s 130th on TI’s list, only five places above Russia) is exacerbating the re-imposition of US sanctions.

Clem Bastow talks about growing up with Dolly magazine – via her local library. And this has been out for a while but Nicholas Whitlam has written a fascinating and immensely readable account of the start of the Spanish Civil War, the Berlin Olympics and much else besides in Four Weeks One Summer: When It All Went Wrong. 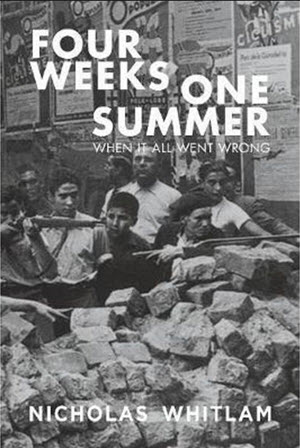 For those of us who assumed Middle-earth was a reactionary’s idea of Utopia, the former Archbishop of Canterbury tries to justify Tolkien’s weird social and political constructions; as one who has twice tried to learn French and mangles even the simplest phrases, I found much to enjoy in this discussion of why we even bother learning it.

HUMAN, ALL TOO HUMAN

So Trump wants to set up a “Space Force” to ensure America rules among the stars. One of challenges we’re only now beginning to face up to is just how poorly suited humans are to life in space, even after you deal with the basic problems of having to take your own air and food and water with you. In fact, we might have to genetically engineer the next generation of astronauts. And in a blow for those who thought climate change could be addressed by releasing the equivalent of a few volcanoes’ worth of sulphur, a new study suggests it works even more effectively on plants than it does on the atmosphere. So what happens when the temperature hits 50 degrees in our cities in the future? And introducing Syndrome E, or what neuropsychologists call evil.

Was Barack Obama too diffident and professorial for his own good, too much the golfer and not enough a basketballer? Or did he understand the limits of power in a way those who served him never could? A review of deputy national security adviser Ben Rhodes’ new account of his eight years with Obama teases out the story of a president who always seemed to keep something in reserve – even when it was needed most. And to a very different perspective of the same era: The New York Times has a long and distressing read of an infantryman’s tour of duty in Afghanistan and what – and who — he lost along the way.

Brexit’s not just bad for the UK economy – it promises to be bad for the European economy as well, according to the International Monetary Fund. This is its estimate of the impact of Brexit based on no deal (they go to World Trade Organisation rules), a free trade deal between the two, or a Norway-style trade agreement scenario. 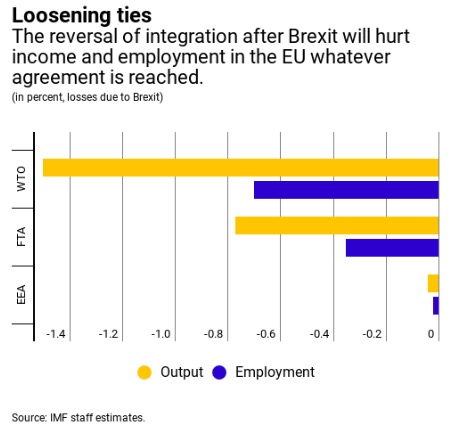 But who will be most affected? 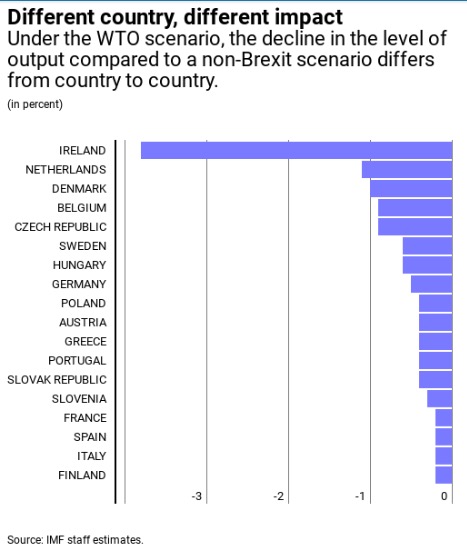 Ireland bears the brunt, along with the Netherlands and Denmark. And why the Czech Republic? It has a large auto industry that exports both parts and vehicles to the UK.

OK, so this one rankles: I really dislike Malcolm Gladwell, but his podcast series Revisionist History is very good both in content – recent historical events that have either been overlooked or deserve re-examination – and enjoyably devoid of those annoying tics and silliness that mar so many podcasts.

That review of Rhodes’ book is really quite something; thanks for linking it. (I was once an avid follower of Andrew Sullivan’s blog even while regularly disagreeing with Sully- does that sound familiar?- and largely because of the interesting and thought provoking stuff he and his subeditors would dredge from amongst the dross, so I very much enjoy having that same service provided here). The book itself sounds very interesting, I shall have to try and find time to get it and read it.

Thank you Bernard and Crikey for these suggestions. Some great reading. Especially enjoyed the Syndrome E; Ben Rhodes and block chain pieces. Saving the NY Times piece on Afghanistan until I feel a little more resilient.