Chris Kenny doesn't shy away from a bit of media biff, but he's now taken aim at someone inside The Australian.

Chris Kenny and Troy Bramston blow up over Barnaby, NPR has its Sky News moment, Walkley Magazine quietly finishes its print run, plus other media tidbits from the day.

Good feud guide. The Australian’s associate editor and columnist Chris Kenny never shies away from criticising his media colleagues, and his Oz peers are no exception. Yesterday it was fellow columnist Troy Bramston who attracted Kenny’s ire over a column criticising Barnaby Joyce, calling for him to leave the parliament.

Kenny tweeted “Funny how the Left thinks standing up for cheap and reliable power is ‘wrecking’,” prompting Bramston to tweet right back with, “I’m ‘the Left’ am I Kenny? I’m a journalist and columnist working for the same paper you do. Have some respect.” 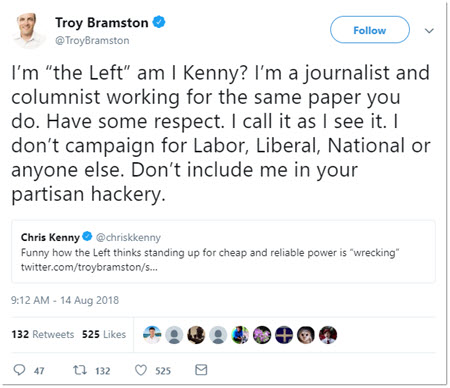 How NPR covers the far right. As Sky News is dealing with the fallout of a flattering interview with extremist Blair Cottrell, and a man who invoked Hitler in the Senate does the interview rounds today, a debate in the US is also considering how the media should deal with covering extremists. Publicly-funded NPR ran an interview on Sunday with Jason Kessler, who organised a “Unite the Right” rally on the anniversary of the Charlottesville rally.

NPR’s public editor/ombudsman Elizabeth Jensen has examined the decision to air the interview, including whether it should’ve been run as part of a package rather than a direct, heavily-edited and pre-recorded interview — a format she said she thought NPR had been overusing. She said the full interview answered some of the criticisms on whether Kessler was challenged strongly enough on his views:

The interview was painful to hear; it had me yelling at the radio, as I know many others did. NPR’s audience is vast; it is still overwhelmingly white. Part of how one heard it may depend on how closely one has followed this story and whether one experiences that type of prejudice. There is no right answer here for everyone. I do think Kessler’s racism and general illogic came through, even in the absence of the more aggressive pushback some critics wanted, and NPR listeners are smart enough to hear that. NPR has decided it will air these interviews. I am on the fence about whether they are necessary. But if NPR is going to go that route, it needs to strengthen its practices for a more responsible execution.

US papers unite with anti-Trump editorials. More than 100 US newspapers will tomorrow publish editorials criticising President Donald Trump’s anti-press rhetoric in a coordinated pushback, CNN reports. Led by the Boston Globe, the editorials will focus on “the dangers of the administration’s assault on the press”, and there has been and “overwhelming response”.

There has been an increase in Trump’s anti-press message over the past month or so — CNN White House reporter Kaitlan Collins was banned from an open press call after asking Trump questions at an earlier photo call, and Trump has referred to the media as “enemies of the people”.

Glenn Dyer’s TV ratings. Nine’s night again in total people, the main channels and the demos thanks to The Block with a bit of help from True Story with Hamish and Andy (which lost ground from last week). Seven returned 800 Words to a weak reception; Dance Boss received about the same, again.

The big story from yesterday though was the lowest metro reading for Nine’s Today show for ages — 203,000 against 274,000 for Seven’s Sunrise. Today is sinking slowly and could fall under the 200,000 mark in the next few months for the first time in years. Change is coming to Nine in breakfast in 2019, you can bank on it. Read the rest on the Crikey website.

How Republicans cheat Americans out of having the government they want

A historical road not taken: the end of an American dream reveals a party lost in a nightmare

The Trump anti-media stuff leaves me shifting in my seat a bit.

It’s no secret in my commenting here that my respect for political reporting (both in Australia and generally) is very low, and that I think it has greatly contributed to the decline in political standards. We’re not just talking about the propaganda masquerading as news from outlets like Fox News or The Australian, here, but even mainstream journalists who consider themselves “unbiased” while happily buying into narratives they are fed, making false equivalences in the name of “balance”, parroting quotes and press releases without giving context (the classic “reporting that he says it’s raining and she says it isn’t, instead of looking out the window and reporting the actual weather” complaint), heavy reliance on anonymous sources, refusal to be accountable when getting things wrong, and obsession with the horse race of politics, the gossip, the personalities, rather than policies and things which affect people’s lives.

As such, when Trump attacks the media it’s a bit difficult to declare that he’s wrong about everything he says no matter how loathsome he is and no matter how much one is concerned he wants to silence dissent. The media was universally against him (considering how right wing most of American media is, that’s quite a feat). Like the Clinton campaign, the US media obsessed about Trump’s personal conduct to the exclusion of focussing on policy issues, failing to realise that a lot of voters will overlook any number of moral failings which don’t hurt them personally especially if they believe the other side is also morally bankrupt. I always thought the Clinton campaign should at least have caught a clue late on when the Billy Bush tapes didn’t move the polling needle at all- everyone who would vote against Trump on moral and ethical grounds was already committed, the rest of the voters weren’t going to be swayed by continuing to focus on that line of attack, but they kept doing it.

The media is predictably mounting their “we are so important to freedom! Free speech! Free press! We’re great! You suck for criticising us!” defence (also seen used against Julia Gillard’s government here). This is not going to change anybody’s view.

It’s about time that the big media outlets which aren’t just propaganda for one side or another actually sat down, admitted their coverage of politics hasn’t been perfect, committed to improving it, otherwise they will all be dead or irrelevant in another decade.

I don’t know which is sicker?
Cousin Jethro – “Creative Accountant & Minister for Gina” (with his penchant for availing himself of the public purse to fund his “lifestyle choices”) writing a book, that’s “primary purpose was to draw attention to rural Australians who struggled and felt either ignored or shunned by wider society”? ……. After what he’s done to irrigators, farmers, towns and SA, down-stream (from his Upper-Darling mates) through the rorting of the M-DBA, and standing steadfast against the implementation of measures that would mitigate the effects of climate change – seemingly to be protect the interests of miner donors?
Or Kenny defending him?