ABC axes Tonightly, says it is time for ‘fresh approach’

The ABC has announced that it is cancelling nightly comedy show Tonightly, hosted by Tom Ballard.

The ABC cancels Tonightly, Insiders’ Twitter stumble, WIN to face cuts in Tasmania, and other media tidbits of the day.

Tonightly axed. The ABC’s nightly comedy program Tonightly has been cancelled after less than a year. The broadcaster announced this morning it wouldn’t renew the program, hosted by Tom Ballard, beyond its final program on September 7, saying, “It is now time for a fresh approach”.

In a statement, the ABC said:

Attracting younger audiences requires bold approaches and we continually experiment with new content and new formats particularly on digital platforms. We remain committed to exploring and developing projects that connect with different demographics. Tonightly deliberately pushed boundaries to inform and entertain. We are proud of the program and its role in supporting some of Australia’s best emerging comedy talent.

Tonightly has upset the government, prompting multiple complaints from conservative politicians about an expletive-ridden sketch that described Australian Conservative candidate Kevin Bailey a “cunt”. The Australian Communications and Media Authority (ACMA) last week cleared the skit of any breach of the ABC’s standards. The show first aired in December last year, and is currently airing its second short season. Executive producer Dan Ilic joined the program for the second season.

Insiders content deleted. The Twitter account for the ABC’s Insiders has been the source of an unusual amount of controversy since one of its tweets was deleted on Sunday following a call from a government spokesperson.

On the program and discussing the Great Barrier Reef Foundation grant, Guardian Australia editor and panellist Lenore Taylor asked about whether due diligence had been done on it — a segment that was clipped and posted by the program’s Twitter account, as is usual for the show. But the clip was later deleted, explained by saying the program received “new information” from the spokesperson.

That decision was roundly criticised, and executive producer Samuel Clark said yesterday it was his call, and “on reflection it was a mistake” to delete the tweet. 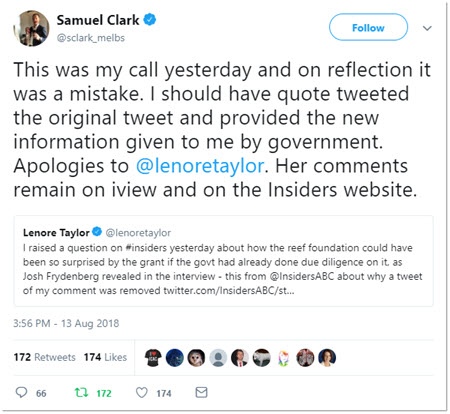 This morning, the clip has been reposted.

WIN News staff cuts. Staff at WIN News in Tasmania have been told nine jobs will be cut under the plan to move producing and presenting its TV bulletin in Wollongong. The ABC reports that of the seven journalists currently working in the newsroom, only four will remain. One of the five camera operator positions will be cut, and three production staff will be made redundant.

WIN announced last week that it would move its Tasmanian week night news bulletin to Wollongong, and cut its weekend bulletins.

ABC and SBS review launched. The ABC and SBS could be asked to share resources, but will remain separate entities, under an efficiency review announced in the May budget. The government launched its efficiency review into the ABC and SBS yesterday, ahead of the next three years’ funding from 2019. It will be led by former Foxtel and News Corp executive Peter Tonagh and former ACMA acting chair Richard Bean, while the ACCC continues its inquiry into the broadcasters’ competitive neutrality. The review follows an efficiency review in 2014, and the Communications Department yesterday released its terms of reference.

They will include investigating cooperation between the ABC and SBS, and the implementation options, as well as efficiency through innovation. The terms of reference said the government would not merge or change the ownership arrangements of the ABC and SBS.

Glenn Dyer’s TV Ratings. Dance Boss on Seven was a dud last night — 479,000 in the metros from 7.30pm. That’s a weak fourth in the timeslot. Australian Survivor on Ten had 651,000 in the metros. The Block rules and so did Nine in the demos. Ten ran fourth in the main channels behind the ABC — a weak result for Ten. Have You Been Paying Attention was its best with 759,000 metro viewers.

What we will lose in the ABC ‘efficiency’ review

Don’t panic, the ABC will be just fine

The ABC is aiming for a younger audience than Ballard’s?
Talk about cradle snatching.