Ben Roberts-Smith v Fairfax. Victoria Cross winner and Seven executive Ben Roberts-Smith has called for the Australian Federal Police to investigate leaks of an investigation into his conduct as an SAS officer in Afghanistan. Fairfax published an extensive report online on Friday and in Saturday’s papers alleging mistreatment of unarmed Afghans, bullying and domestic violence — all of which Roberts-Smith denies. He went to court on Friday to try to stop the story being published in print on Saturday, but lost, and sat down with News Corp’s The Weekend Australian to further deny the allegations. The Oz reports that he’s launched defamation action against Fairfax, as well as asking Attorney-General Christian Porter to refer the leaks to the AFP.

Sharri Markson named journo of the year. The Daily Telegraph’s Sharri Markson has taken out the $25,000 journalist of the year prize at the Kennedy Awards on Friday. Judges chose Markson over Fairfax’s Kate McClymont and Nick McKenzie for the prize, based on her stories about Barnaby Joyce’s baby, Border Security chief Roman Quaedvlieg, and the NSW Rural Fire Service’s actions in fighting a March fire at Tathra.

She has repeatedly set the national news agenda and shaken the political establishment with a series of big exclusives using sheer determination and careful cultivation of contacts to break from the pack. Markson’s raft of stories which saw her voted Journalist of the Year included her fearless determination to expose the Deputy Prime Minister’s illicit affair and the subsequent political cover-up that has changed the face of Australian politics forever and will echo in the corridors of Parliament House for decades.

Markson also won awards for outstanding political journalism and scoop of the year in the NSW journalism awards, held on Friday.

News Corp shares lose gains. American investors have wiped well over $1.5 billion from the value of News Corp and hundreds of millions of dollars from the size of the Murdoch fortune because they have just realised the truth about the family — they don’t care for other shareholders.

Friday’s 12.6% plunge on Wall Street in the value of News Corp shares was the largest in five years, and wiped out all the share price gains the Murdoch family’s second company has made since the great splitting of the empire in June 2013. The closing price on Friday on Wall Street of US$13.45 came after a silly rise in Australia earlier in the day and took News Corp’s share price below the US$15.38 registered in 2013, the day post-split trading in the new shares started.

The reason for the slump was simple — US investors finally listened to what was said on Friday’s conference call, unlike Australian analysts. The conference was told by chief financial officer Susan Panuccio that there would be “some short-term reinvestment required” at Foxtel to attract subscribers, as well as extra costs associated with a new streaming service and cricket broadcast rights. Those comments crystalised concerns have about why News folded Foxtel and Fox Sports into one company earlier this year while local analysts have blithely accepted News’ assurances and not challenged them. — Glenn Dyer 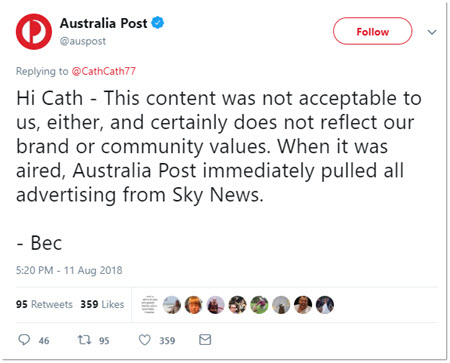 Australia Post and other companies have been campaigned by Sleeping Giants Oz, a group that pressures companies spending their advertising money with companies who publish “hate speech”, to remove advertising on Sky over the interview.

Markson eh! Who would have thunk it.

You can be sure Markson didn’t, Independent Australia was all all over Joyce well before the MSM Liberal/National protecting Press Gallery & MSM were.
Also the other gent whose name eludes me I think he broke it & Independent OZ followed it up,Markson is a jumped up gossip columnist kinda like Weider getting a Quill award it will & should not have happened
As for our boys own adventures in Afghanistan,if its true they should all read the Nuremberg trials Bestellungen sind Bestellungen don’t work any more as the SS found out

John…you beat me to it! Independent Australia was THE FIRST to publish the shenanigans of Beetroot, long before we heard anything from the Terrorgraph.
Markson only made a big splash about it AFTER the byelection in New England, if my memory serves me correctly.
She is a thoroughly nasty piece of works…about the last person who should be awarded ANY prize for ‘journalism’. What a travesty!!

“Sharri Markson named journo of the year”
You are fuckin’ joking?

So who judges “Journo (Gurno?) of the year”? What’s their record like on real life things?

On the “bright(?)” side it does give us an indication of the shallowness of our media gene pool – “No Diving Allowed”.

Markson or McClymont is not a question worth asking.