The Australian Media and Communications Authority has cleared an expletive-riddled sketch from the ABC's Tonightly which raised complaints from Communications Minister Mitch Fifield.

An ABC comedy sketch that prompted a complaint from the Communications Minister and widespread criticism from conservative politicians and columnists has been cleared by the television regulator.

The Australian Media and Communications Authority (ACMA) investigated the Tonightly skit that suggested renaming the electorate of Batman to “Batman was a cunt”, given John Batman’s involvement in the murder of Aboriginal people. Comedian Greg Larsen’s segment also included a mocked-up campaign poster of Australian Conservative candidate Kevin Bailey, which also described him as a “cunt”.

ABC head of entertainment David Anderson subsequently apologised to Bailey for the segment.

After the segment aired, in March, Communications Minister Mitch Fifield complained directly to the ABC, and then directed that complaint to ACMA. “Vitriolic abuse of this kind has no place on the national broadcaster,” Fifield said at the time. Senator Cory Bernardi — who also lodged a formal complaint with the ABC — and Simon Birmingham also criticised the sketch, suggesting someone should be fired for it.

But in an investigation published today, ACMA has found the skit didn’t breach any of the ABC’s standards — it looked into whether the skit breached standards relating to coarse language, and whether Bailey was treated unfairly.

ACMA didn’t investigate complaints that the segment breached the ABC’s impartiality requirements because that standard only applied to news, not satire, which Tonightly is considered.

The ABC provided ACMA with a breakdown of what made the segment funny, and how it justified calling a political candidate a “cunt”:

The ABC submitted that ‘genuinely calling a candidate a cunt is an entirely inappropriate and unjustified thing to do’. However, the ABC stated that calling Mr Bailey a ‘cunt’ was editorially justified, in this context, because the comedic nature of the segment signalled to the audience that the program fully understood the inappropriateness of the language directed at the candidate.

There are limits to the licence granted by comedic context and this sketch came close to those limits by singling out an individual in an offensive way … However, on balance, the ACMA considers that the ordinary reasonable viewer would have interpreted this part of the segment as being driven by comic intent rather than personal malice, and therefore would have understood that it was not a gratuitously offensive personal attack.

ACMA found that the program was appropriately classified as MA 15+, which allowed coarse language provided it was “editorially justified”, which ACMA found it was. It took into account “the comedic context, audience expectations, the use of signposting and consumer advice warnings, and the program’s broadcast at 9pm on a dedicated comedy channel”.

Tonightly has been a particular target of The Australian’s Gerard Henderson, who runs a tally of Ballard’s swearing in his weekly Media Watch Dog blog hosted by the Oz. News Corp tabloid columnist Andrew Bolt has also taken exception to Ballard’s program, not only for his “foul language” but also his “attacks on Christianity”.

The ACMA decision is a win for the ABC as it faces repeated political attacks from the government and some parts of the media, as well as government reviews into its competitive neutrality and the findings of an Australian screen content review.

Fifield’s complaint about Tonightly was one of six he’s made to the broadcaster this year, including complaints about Emma Alberici’s corporate tax articles, analysis broadcast on Insiders about the recent byelection, and Triple J’s decision to move its Hottest 100 broadcast from Australia Day.

Earlier this year, ACMA found the ABC in breach of its impartiality standard in a TV news report by political editor Andrew Probyn. In the report, Probyn called former Prime Minister Tony Abbott “already the most destructive politician of his generation”, something ACMA said was likely to be understood as “pejorative” by the reasonable viewer. 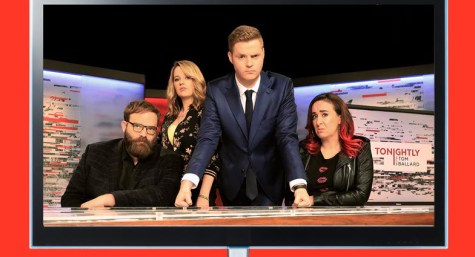 ABC axes Tonightly, says it is time for ‘fresh approach’

Get that up yer Fifield! you wanker!

Strictly satirically speaking, are we now allowed to call Fifield an ass, as the cousins would say?

Here we go again. I’m an old bloke now and I’ve watched television shows since they started in 1956. If my observations from the past are correct, this is the way we allow another rude word on TV. Firstly, it has to be said by someone on TV and there has to be an uproar about atrocious language being used on TV these days. Then expect to hear the word more frequently starting late at night and then getting earlier until you get used to hearing it. That’s what usually happens and that allows the language on TV to become worse as time passes. I was thinking that c-nt would be the last of the bad words but obviously, more have been developed. As an idea of where this all leads, I just happened to see the start of Deadpool 2 last night and realised there are many, many, many more bad expressions than I generally hear.

Hi OJ,
Like you I’m an oldfellow, and I can outswear most people in a multitude of languages.
It does annoy me when so called comedians just use foul words to supposedly create humor.
A comedian can be funny without swearing just for the sake of it. Certainly adding a swearword to empathize a point in a joke or where the swearword is the point of the joke is acceptable, to me anyway.
But so many of the so called comedians in Aus. seem to think the swearword is the joke. Yes in the old days ti often caused an embarrassed sort of giggle by some in the audience. Now it is so passe’ and has become boring.
Also any big noting for being the first to use that word on air is well passed. But they seem to be slow learners (P.C. intellectually challenged.)

Amazing isn’t it three politicians complained, one of which is a defector, so he should have had a by-election by now, which would be the most democratic Nation building thing he could ever do. I wish these guys would get out in their electorate more. Having said that, I agree totally about comedians who swear to make up for their lack of funny material, should not be on TV. Sir Bill Connerty comes to mind as one of the most fun comedians ever who dropped the F-word to perfection.

So, the skit survives assessment for “can you say that” but surely would not survive assessment on “was it funny”. It was a truly hopeless skit. Use of the foullest swear word in our language does not of itself provide humour.
I am sure it is hard work to find comic material even once a week, let alone 5 nights a week. But bad singing would be funnier than this skit.

Occurred to me today after seeing the splendid “The Breaker Uppers” that if we were in Aotearoa this pronunciation would be a non event. As Dorothy Parker once said; there but for a consonant go I.

Tom Ballard mistakes shouting and swearing for being funny.

Is that what’s called being “edgy”?
I cannot recall the last time I cracked even a smile at that type of review format or even stand-up.
Must be just me.