Sky News promoted Greg Byrnes despite his sanctioning of an interview with a racist, a new Oz campaign brews and Twitter finds excuses for Alex Jones.

Sky editor approved Cottrell interview. It turns out that right-wing thug Blair Cottrell’s appearance on Sky News on Sunday wasn’t an inadvertent slip up, as the network would have had us believe earlier this week. It was a sanctioned decision by since-promoted news editor Greg Byrnes. Now acting program director, Byrnes told Fairfax he knew Cottrell was on the rundown to be interviewed by former Northern Territory Chief Minister Adam Giles on his show, and that Byrnes gave the interview a green light. “Regretfully, it was my error. The company undertook a review and advised me of an immediate change to the editorial structure,” Byrnes told Fairfax.

A young producer was suspended over allegedly defamatory comments Senator David Leyonhjelm made about Greens Senator Sarah Hanson-Young and which were then repeated in a lower frame super on TV screens. So why hasn’t Byrnes been suspended? Cottrell’s appearance has been just as damaging to Sky’s image. — Glenn Dyer

More advertisers pull out of Sky. Blair Cottrell’s interview has also been damaging to Sky’s bottom line. Following American Express and Huggies, Specsavers has also confirmed it’s directed its media buyers not to advertise the company on Sky. Sleeping Giants Oz, which has been campaigning for companies to withdraw advertising, has also been campaigning companies that screen Sky, including Qantas. The Public Service Association’s Troy Wright says he and his organisation will no longer fly Qantas as long as it screens Sky. Its competitor Virgin Australia has reportedly lodged a complaint and stopped screening Sky in its lounges.

Victoria’s Public Transport Minister Jacinta Allen announced this morning that she had directed that Sky be removed from all CBD station screens. “Hatred and racism have no place on our screens or in our community,” she tweeted. 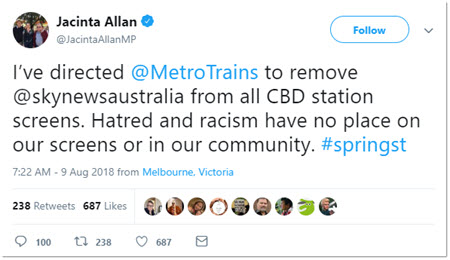 The Oz v Fiona Martin. You could ping The Australian’s culture wars all day and all night, and still not cover the territory, so we have been trying to give it up for lent. But we had to remark on what must surely be the most pissweak feint yet, the story of a uni lecturer, Fiona Martin, who, in advising students about minimising online footprints, may have made an inadvisable joke, but who also “criticised late cartoonist Bill Leak”. Oh noes! According to the Oz:

The same lecturer also ­criticised the work of Bill Leak, who worked for The Australian, before saying ‘may he rest not in peace’.

A Bill Leak mention is catnip to the Oz’s addled audience, but even culture war gunslinger Rebecca Urban must have found it tough to type that one out, after all that palaver about unis and free speech a while back. It’s almost zen, the long-sought after scandal with no content. Best bet is, it’ll run for six days. Johannes Leak has already written an op-ed decrying the state of our universities, such that one person could make one disparaging remark about his dad once. Coming up, the results of whatever came up in an intern’s trawl through Fiona Martin’s past as available on the internet. — Guy Rundle

Why Alex Jones is still on Twitter. In explaining why conspiracy theorist Alex Jones hasn’t been banned from Twitter, the social media site’s boss Jack Dorsey has said it’s up to journalists to fact check him. Dorsey has put the onus back on the media, saying: “Accounts like Jones’ can often sensationalize issues and spread unsubstantiated rumors, so it’s critical journalists document, validate, and refute such information directly so people can form their own opinions. This is what serves the public conversation best.”

Earlier this week, content from Jones’ InfoWars was removed from Facebook, Apple, Spotify and even Pinterest for breaching their terms of service. Twitter says he hasn’t breached any of their rules. Jones is currently involved in a legal battle with parents of children killed in the Sandy Hook school massacre, which he says did not happen.

Glenn Dyer’s TV Ratings. Nine’s night easily in total people, main channel and the demos thanks to The Block. Ten and the ABC sort of drew for third. Pointless on Ten at 6pm was 232,000 in the metros. Won’t last at that rate. Read the rest at the Crikey website.

Jack “Pontious Pilate” Dorsey is wrong and irresponsible. Fact-checking should be done before publication, not afterwards, by which time the damage has been done.

Jonathan Swift wrote in The Examiner in 1710: “Besides, as the vilest Writer has his Readers, so the greatest Liar has his Believers; and it often happens, that if a Lie be believ’d only for an Hour, it has done its Work, and there is no farther occasion for it. Falsehood flies, and the Truth comes limping after it; so that when Men come to be undeceiv’d, it is too late; the Jest is over, and the Tale has had its Effect…

It’s good to see sponsors exercising their freedom of speech toward SKEW News.

I’m pleased Blair Cottrell appeared on Sky News. Up until now Sky has enjoyed the luxury of plenty rope ….and is now in danger of hanging itself.

The (Labor) Victorian government has stopped using SKEW News on public transport – why haven’t they been airing ABC NEWS?
Meanwhile, over on The Dum – we had Liberal “chair-leader” Baird, Liberal politician “Foghorn” Boyce and “Independent”/Liberal Sydney councillor Vithoukas (with her history of comments on queue jumping boat people?) – “discussing” the move? Guess where that was going with them? Sticking up for SKEW News.