A Geelong community radio station has been forced to fundraise after legal action from the former mayor.

A community radio station in Geelong is fundraising to survive a defamation action brought against it by former paparazzo and Geelong mayor Darryn Lyons.

The Pulse is run by charity Diversitat, and station manager Leo Rankin said in an interview on the station that they had apologised for on-air comments made in July last year that suggested the nightclubs Lyons runs are “drug dens”.

“We’ve apologised for what was going on and any offence that was taken. We’ve done that at the request of Mr Lyons, so we were hoping it wouldn’t get to this stage,” Rankin said. “It’s quite sad that we’ve got to this stage and it’s devastating for the Pulse — the news that we might have to shut our doors if worst comes to worst, because these are very expensive exercises.”

Lyons — who did stints on Celebrity Big Brother UK and Australia’s poorly-rated Excess Baggage before he was elected Geelong mayor in 2013 — did not respond to Crikey’s request for comment before deadline, but has tweeted that he had wanted to resolve the matter. 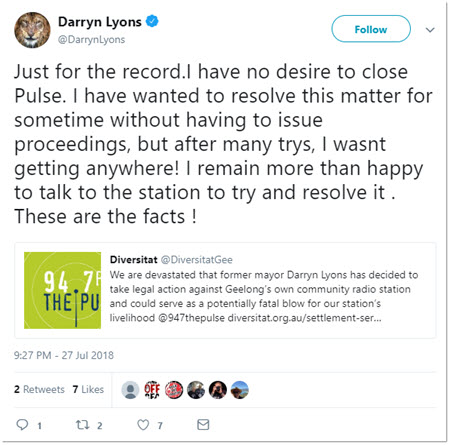 But last month Lyons filed a writ with the Victorian Supreme Court, alleging that comments made by former presenter Greg McHenry about the nightclubs had defamed him. The references to Lyons’ nightclub were made amidst a spray that included that he was a bully and poorly dressed, but only the nightclub comments have made the defamation writ.

Lyons was Geelong mayor from 2013 to 2016, and has spent much of his career in the spotlight. He debuted a six-pack implant during his Big Brother stint, and has also appeared on Hells Kitchen, Top Gear, Sally Morgan: Star Psychic, Tycoon, Channel Seven’s Dragon’s Den, the UK’s I’m A Celebrity … Get Me Out Of Here! and the documentary series Paparazzi, about himself.

The station is running a crowdfunding campaign, and holding a “Radio Rescue” fundraising event later this month to help fund the court action. Diversitat, the charity that runs the station, supports ethnic communities in Geelong, and The Pulse includes programming in languages other than English.

Funnily enough I assume that all nightclubs – to varying degrees – are drug dens.

Is it the word “Den” that is the problem?
How about smorgasbord? Better.