Something is rotten in the state of Danish banking, the reinsurers of the world want nothing to do with coal, and Sky News is hunting for a new boss.

Coal can’t get reinsured in this town, Julie Bishop’s remarkable geological discovery, and who will take over an ailing Sky News?

Blue sky thinking. With Sky boss, Angelos Frangopoulos, heading for Dubai and a crash course of Arabic to head up Sky plc’s Middle East operation, speculation has turned to who News Corp will trust to fill his shoes. Try Jason Morrison, presently Seven’s Sydney news boss, a former chief of staff at Ten in Sydney, a former host on 2GB and 2UE (where Alan Jones reigns supreme, as he does on Tuesday nights on Sky News). Morrison is mates with another Sky star, Paul Murray (formerly at 2UE) — in fact they are besties. Morrison is also conservative with that capital C. Conservative enough for Peta Credlin to like him.

Reinsurers getting out of coal. In more bad news for the coal industry, two of the world’s biggest reinsurers say they will no longer accept risks from companies with a big role in the industry. Munich Re is the world’s biggest reinsurer (that’s an insurance company that insurers the risks that insurance companies can’t handle or want protection against) and has just announced the company will no longer accept risks involving companies who get 30% or more of their revenues from coal-related businesses.

“In the individual risk business, where we can see the risks exactly, we will in future in principle no longer insure new coal-fired power plants or mines in industrial countries,” CEO Joachim Wenning wrote in a German newspaper yesterday. Swiss Re, the world number two reinsurer by market value, announced last month it would not reinsure any company for which thermal coal (used to power generation, as opposed to metallurgical coal) represents more than 30% of its business, following French reinsurer Scor.

That leaves the colossal Berkshire Hathaway reinsurance group, controlled by Warren Buffett. Its two major reinsurers are National Indemnity and General Indemnity, which are active in Australia along with Munich Re and Swiss Re. This decision will make it even tougher for the Adani mega-mine to get started in central Queensland, unless the Turnbull government not only funds the development, but underwrites all the insurance risk. Earthquake season. Foreign Minister Julie Bishop might need to undertake some residual geology lessons if she’s to avoid embarrassing herself again. In her interview with Today early yesterday morning about the earthquake that struck Indonesia, she said “Bali remains a beautiful place to visit. But there are earthquakes in this region. It is prone to earthquakes at this time of the year.” In fact earthquakes are generally caused by tectonic plate movement — although fracking can also generate very damaging quakes nearby. The weather, the climate or the season don’t have anything to do with them. There’s no winter earthquake season in Bali.

A perler of a cause. In the wake of the drought besetting much of regional NSW, many lambs are ending up orphaned or abandoned. A group of knittters across the country are making jumpers for lambs to keep them alive during drought. Knitting jumpers for cold sheep? Are you going to donate my hair back to me in toupee form? And wouldn’t it be better to address the underlying issue of climate change that will bring more and more of these extreme weather conditions about? That feeble commentary is, obviously, just an excuse to show you this picture of a group of their bright-eyed orphaned lambs wearing itty-bitty lil’ multi-coloured jumpers: 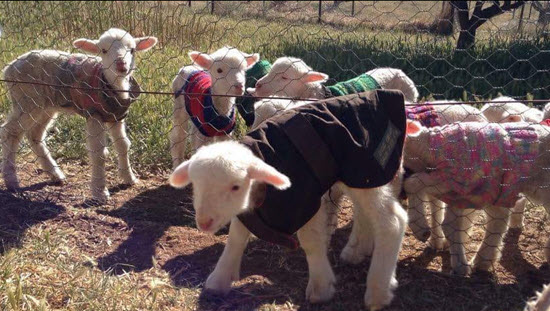 The slings and arrows of outrageous fortune. In echoes of the Commonwealth Bank’s money laundering transgressions, Denmark has launched a criminal investigation into Danske Bank, the country’s biggest lender, over claims that it missed more than US$8 billion of money laundering in its Baltic offices for eight years. The Danish bank’s general counsel says Danske Bank is assisting prosecutors with the investigation. That’s what the CBA said here as Austrac, APRA and ASIC closed the net.

But the Danske Bank allegations are far more serious than the CBA’s offhanded oversight of its cash sucking ATMs. Denmark’s Public Prosecutor for Serious Economic and International Crime’s investigation will examine transactions carried out through the bank’s Estonian branch. Danske Bank launched an internal investigation of the same transactions last year following reports in Danish media alleging that its Estonian branch was used to launder money from 2007 to 2015.

How much was it? Well, Danish media reports at the start of last month reckon it could be US$8.3 billion. Danske launched its own investigation last year into the allegations that its Estonian branch was used from 2007 until 2015 for money laundering from countries including Russia, Azerbaijan and Moldova. That report was due to be completed by the northern hemisphere’s autumn but the government investigation will end that.

Frangopoulos should get Sky’s house in order and quickly

Jason Morrison will be a perfect fit for Sky, he was the arsehole responsible for giving Poorlean a regular slot on Sunrise and filling that show with a circus troupe of loopy RW gobshites (e.g. Prue McSween, Alan Jones, Paul Murray etc.)

‘Lady Penelope IS “The Seasonal Earthquack Maker”….. Thunderbirds are GO!’