The fallout from Sky News' interview with far-right extremist and convicted stalker Blair Cottrell continues as companies begin to pull ads from the network.

Sky loses sponsors. The fallout from Sky News’ interview with far-right extremist Blair Cottrell has continued with companies pulling advertising from the pay-TV network. Credit card company American Express and nappy brand Huggies have both confirmed on their Twitter accounts they have pulled advertising from Sky News. Huggies said Cottrell’s interview “did not align with our values relating to diversity”, and Amex said “recent content on the channel does not reflect our brand values”. 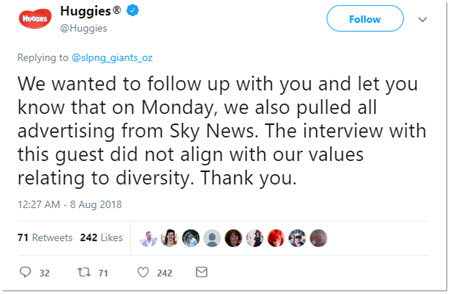 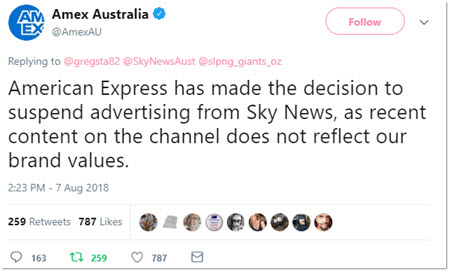 Sleeping Giants Oz, which campaigns for companies to send a message against hate speech with where they spend their advertising money, has been calling on Sky News’ advertisers to pull ads over the interview.

The revolving door. Courier-Mail columnist Paul Syvret has filed his last column after 30 years working in newspapers. Syvret, who describes himself in his Twitter biography as a “hysterical leftist, snowflake, flog, union thug, cultural Marxist”, said he was seeking out “new, though as yet unidentified, horizons”.

Last year, Syvret drew ire from his News Corp colleagues Tim Blair and Andrew Bolt for writing favourably about former Human Rights Commissioner Gillian Triggs, at the height of the News Corp pursuit of her.

Glenn Dyer’s TV Ratings. Nine’s night. Seven finished like Dance Boss’ second episode: down the list with 842,000 nationally, down from 903,000. The ABC again topped Ten and snagged third place in total people and the main channels.

The Block did well with 1.28 million national viewers but couldn’t top Seven and Nine’s hour of news from 6-7pm — a repeat of the lack of interest from viewers for House Rules, Masterchef and Australian Ninja Warrior. These are old formats and viewers are bored with them. Underlining this point, The Block’s metro audience fell to 921,000 last night from 1.13 million the night before. Australian Survivor on ten averaged 799,000, up from 773,000 the night before, but that was the only Ten program to stand out.

“Huggies dumping SKY”? Now that is irony.
….. Meanwhile Syvret has smelled the winds?

Farewell Paul Syvret, your thoughtful columns will be missed.

Good that SKY is losing advertisers but so did Alan Jones after his “chaff bag” comments – the boycott lasted all of a month.

The SKY business model is “funny” :- sponsors pay Murdoch to advertise on his pay-TV channels, then the rubes pay Murdoch to watch those commercials…..
Any wonder Turnbull’s Senator for FUX, Fifield, gifted such a generous sponsor’s network 30,000,000 of our hard-earned $tax for them to broadcast “less popular sport”, that rubes then had to pay FUX to watch?
When those same rubes could have watched such content for free on the ABC, or SBS, if those TV channels (with their ready-in-place network) had been paid that money instead.