Why are Labor and the Coalition fighting over marine parks?

Like the depths of the parks themselves, the debate is murky. Luckily, Crikey is on the case.

News of the government’s plan for 44 new marine parks, or roughly half of what Labor proposed in 2012, has been met with a mix of outrage and resigned acceptance from conservationists; dismissal from some recreational fishers; and, from commercial fishers and some gas explorers, even relief.

Now, after failing to disallow the package in March, Labor and the Greens intend to tackle five individual management proposals at a final debate and vote on August 16, with the aim of convincing the crossbench to block at least one or two proposals.

What has been missing in the debate — and what got the Greens in trouble for “dithering” over the new plans — is a clear picture of where Australia sits now. Our oceans apparently exist in some kind of quantum space where the Coalition can legitimately argue that the package creates new marine parks and Labor, equally, can claim it decreases overall protection.

Let’s see how any of this makes sense.

Where is Australia at right now?

First up, Australia currently has about 10-11% of its Commonwealth and state marine jurisdiction in functioning marine reserves, most of which the Howard government created for the Great Barrier Reef, as well as areas off the coasts of Tasmania and Victoria.

In 2012, Labor sought to bump this up to 36%, even getting as far as having the new parks declared by the Governor-General. However, former prime minister Tony Abbott scuttled management arrangements before the laws created any physical, on-water presence, creating what Oceans Director at Pew Charitable Trusts Michelle Grady calls “paper parks”.

“The Labor parks are technically, legally enforced, that is the language that sits on the government’s website,” Grady said. “But transition arrangements were put into place by the Abbott government to make sure that there was no change on the water.”

Environment specialist at the University of Melbourne Brad Jessup explains that the current confusion between legislation and management — which has extended even to a Twitter debate between opposition spokesperson on water and environment Tony Burke and Greens Senator Peter Whish-Wilson — comes down to three levels of marine park protection: the principal act, the regulations beneath the act, and management plans, which is what Abbott suspended.

But Jessup argues that Labor getting as far as designating three general International Union for Conservation of Nature (IUCN) categories for their parks (green zones for full conservation status, yellow for seafloor protection, and blue for basically nothing) means that they are, in some capacity, regulated and “it is wrong to say that, at the moment there aren’t protection for these areas”.

What would the new legislation do?

However murky the current situation is, the Coalition’s package would explicitly downgrade 50% of the Coral Sea’s “green” protection to “yellow” seafloor protection, opening up these areas to fishing, while also extending “yellow” areas by 200,000 square kilometres. 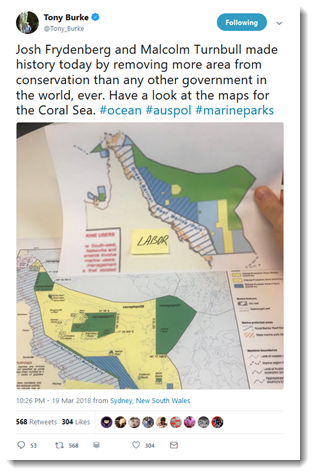 This would effectively allow fishing in areas that were perhaps regulated but not managed. While new parks would be better managed, conservationists have slammed the conflation of yellow zones as green for slashing overall protections for marine life with Grady arguing even Labor’s 2012 ratio of water column-to-seafloor protection only displaced commercial fishing “by less than 1% of the gross value of product” while also allowing for strategic fish-breeding areas.

In a “cynical reading”, Whish-Wilson also speculates that the Coalition’s unusual decision to bring on their own disallowance measure in March was meant to reassure the oil and gas industry. Recent Nationals dialogue about drilling the Great Australian Bight does nothing to allay this concern.

While he acknowledges the new IUCN make-up might not have the correct ratio, Jessup advocates for implementing the new package because, after decades of waiting, bureaucrats would finally be able to enforce on-water management plans. Similarly, he argues that disallowing aspects of the five-part package would “be the worst option” as, he argues, creating  three different types of regulatory approaches only complicates matters further.

But this is what Labor and the Greens are working towards with the Senate crossbench, with Whish-Wilson hoping that “we may not win South Australia and the south-west marine park, but we may be able to get [the Centre Alliance] and Derryn Hinch, for example, for disallowance in the Coral Sea”.

Failing that, a future Labor government would need to pass new legislation or review these parks once every 10 years. As Burke tells Crikey, “the difference between disallowing them now is that the process would be further along at the time of the election, and, if we win the election, we would be able to get new protections in more quickly.”

“And I tell you we’ve got no appetite to wait 10 years to get these protections back.”

Liberal Party pandering to its true constituency, yet again. Abbort really set the template for Twittler.

The opposition wants to do one thing, the government wants to do nothing while looking like they are doing nothing and locking in the result for 10 years.

You beat me to that comparison – it is totally apposite.
Like any fairground prestidigitator it is all movement & distraction to do something else.
Always watch the hand that is not doing the “trick”.
In this case what is being studiously ignored, the wide open option for the rapacious.

It sounds very complicated, but if the LNP are involved their natural incompetence and greed is bound to make a complete mess of any legislation they produce.
I would put my money on Labor and the Greens.