The Acute Misfortune premiere gets some uncomfortable feedback from the father of its subject, late artist Adam Cullen.

Some uncomfortable feedback at the Acute Misfortune premiere, yet another one bites the dust at ENGIE, Bluesfest director doubles down, and mining for women at “Diggers and Dealers”.

Cullen’s father goes off script. The film adaptation of Acute Misfortune — the acclaimed biography of artist Adam Cullen penned by Saturday Paper founding editor Erik Jensen — had its premiere at the Melbourne International Film Festival on Saturday and the panel discussion immediately following the film produced a bracing moment, a tipster tells us.

The panel featured Jensen, and director Thomas M. Wright who asked Adam Cullen’s dad up to the panel. Wright asked Cullen what he thought of the film and, as our tipster tells us, “he said something like ‘I don’t think you should be asking me that, Tom’. [Cullen] then went on to say that it was an ugly film and an ugly portrayal of his son and that he wished it focused more on the art.”

Our tipster tells us Wright tried to clarify why, having seen the film before, Cullen’s view had apparently changed. Cullen conceded “he had seen it twice before, but he said it was a very different experience seeing it on the big screen with so many people in the audience. He said he thought, though, the performance of Daniel Henshall [who played Adam Cullen] was exceptional.”

C-E-ENGIE-O. ENGIE Australia forlorn search for a CEO who can stick around continues. Alex Keisser left in June last year, before damning revelations from the Panama Papers hit the energy giant in November. And now we hear the new CEO Michel Gantois has been “sacked due to mismanagement”. Our tipster tells us that the executive management team is in disarray: “Up to 15 employees have resigned as a result of the new CEO”, and now many are in interim acting positions.

Got the Noble blues. Over the weekend it came out that Bluesfest director Peter Noble had used the festival’s Facebook page to send an abusive message to a woman who called this year’s lineup a “sausagefest”. Without identifying himself, Noble wrote:

You attacking events without doing any research on them and starting a media campaign based on your own isms and schisms is the sort of thing that worked well in Nazi Germany. Find someone to attack because you have a screw loose. Bet you are an under or underemployed white privileged nobody with too much time on your hands. Going nowhere fast to a life of depression and loneliness due to you having nothing meaningful to justify why you continue to breathe.

Speaking to the Herald Sun, Noble said he “shouldn’t have done it” and would “personally apologise” to the woman. “I’m going to make it right with her,” he said.

Ms Tips understands the woman (who we are choosing not to name) has since received an apology from the festival’s Facebook page which was signed off “Bluesfest”. “On behalf of Bluesfest, we deeply apologise for offending you with our responses,” it reads. “We apologise unreservedly for the tone and poor choices in our response”. However, she claims she hasn’t seen much of Noble’s promise to personally “make it right”.

“All I asked for was an apology,” the woman told Crikey. “It’s not satisfactory because it’s clearly not written by him … it’s pretty disappointing. If it was him, I would accept it fully.” The woman also says she took particular offence to Noble’s comments as her father was a “Holocaust child”.

“I have no interest in bringing him or his company down,” she said. “I just want to move forward and go back to the original question: where are the chicks?”

That’s a question Bluesfest seems keen to engage with, but the tone of response may depend on who’s running the social media accounts at the time. Here’s a response to criticism from the “LISTEN” Facebook page from earlier last week:

And here’s another, posted on Saturday after Noble’s comments in the Herald Sun (where he also mentioned Turnbull and Dutton’s rhetoric on the Sudanese community). 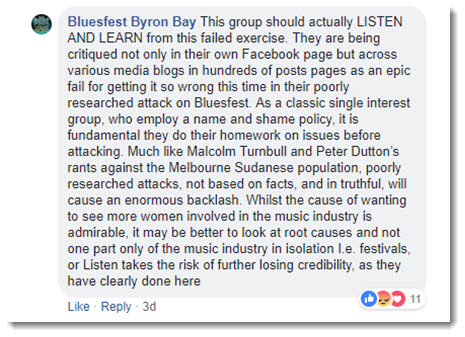 Noble then started debating publicly via his personal account. 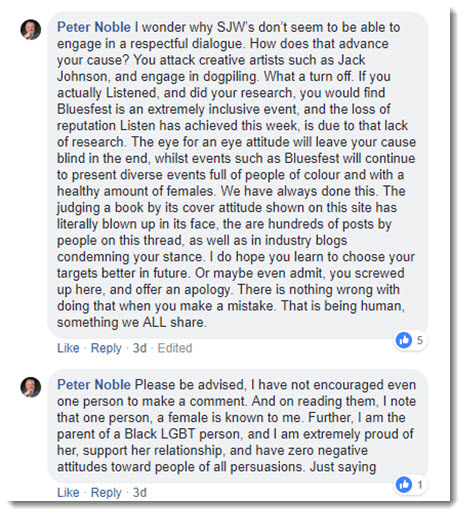 Not an ideal response to an ongoing debate in the music industry, but at least the person who’s usually in charge of the Bluesfest Facebook (and writing the apologies) can breathe a sigh of relief.

Gender breakdown. With the annual “Diggers and Dealers” mining conference underway in Kalgoorlie this week, it’s time to recognise the extraordinary progress that the conference — once best known for the prominence accorded to skimpily-clad barmaids — has made on female participation.

This year, there are two female speakers on the three-day speakers program. That’s two women in 50 slots, or 4%. But if you think that’s bad, last year there was just one female presenter. At this rate, there’ll be gender parity at Diggers and Dealers in the early 2040s.

Noble’s an idiot, but he is right about one thing – considering most Bluesfest’s have been pretty well represented, its a bit out of line. Hell, look a little closer at the first line up, and you have I’m with her, Irish Mythin and Larkin Poe, all all female line ups, and total all up with female acts is around 1/4 of the announcement.

And thats only on first announcement! There’s another two to go.

Personally though, the blues is already hard enough to see, does it really need to now have a quota of penis and vagina?

Noble is exactly right. This festival makes an outstanding effort to bring a diverse and interesting lineup every year and to lob grenades because this year’s lineup doesnt approximate a 50/50 gender split is shallow and disappointing.