Jamie Tarabay will be joining the Times' Australian office as correspondent, while controversial opinion writer Bari Weiss gets a 'residency'.

The New York Times continues its Australian adventure, Sky’s Cottrell non-apology turns into a non-firing, Fairfax raises the paywalls, and other media tidbits of the day.

NY Times Down Under. The New York Times is expanding its Australian bureau with a new “residency program” that will host Bari Weiss (as punishment?) and Nick Corasaniti, who’s volunteered to give Australians surfing lessons, among others. The bureau will also add a new correspondent in Jamie Tarabay, who has worked across the Middle East and Asia.

Feel the Byrnes. For a brief minute or so at 10.30am yesterday, it looked as though Sky News had gone further than its non-apology from news director Greg Byrnes for having fascist Blair Cottrell as a guest. The Australian’s media Twitter account broke the story that Byrnes had quit over the affair: 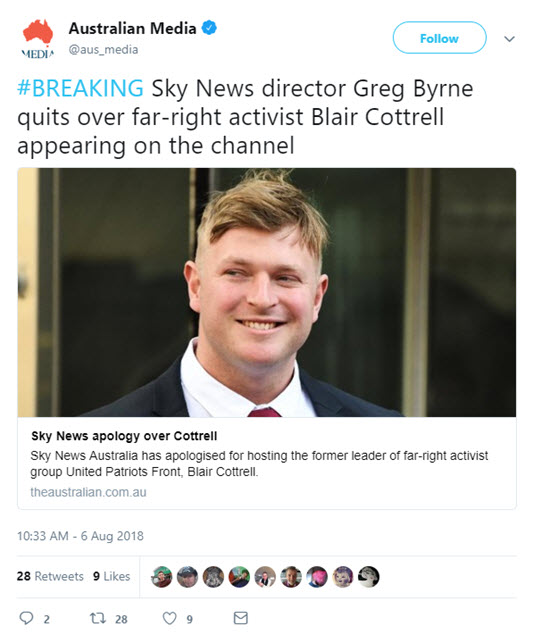 It was quickly deleted and replaced with a story about former Labor minister and Sky News commentator Craig Emerson, who quit in protest. In fact, far from quitting, Byrnes was shifted to the newly-created (and more senior role) of Acting Program Director. The network has also rested The Adam Giles Show, which Cottrell appeared on. Now all they have to do is find a rookie producer to pin it on, and all will be well. — Charlie Lewis

Why Emmo quit. Craig Emerson has explained in detail why the Blair Cottrell interview prompted him to quit after five years as a commentator on the network. Writing in the Australian Financial Review today, Emerson said:

A Sky anchor wishing a neo-Nazi all the best in his endeavours is yet another step in the mainstreaming of racism and bigotry in our country … My father would never have understood me appearing on a television network that hosted anti-Semitic racists.

Fairfax paywall expands. Fairfax is pushing ahead with paywalls for more of its regional titles. It will soon roll out subscriptions at the Ballarat Courier, the Bendigo Advertiser, The Standard (Warrnambool), the Wimmera Mail-Times, Stawell Times-News and Ararat Advertiser in Victoria, and The Advocate and The Examiner in Tasmania. There are already paywalls in place at the Wagga Daily Advertiser and The Border-Mail, among others in New South Wales. The company has been gradually rolling out paywalls on its 160 regional titles around the country. News of Nine’s takeover of Fairfax has raised concerns that the regional group of newspapers will be the first to be offloaded by the new media giant.

Alex Jones banned. Far-right broadcaster and conspiracy theorist Alex Jones has had content removed from Apple, Facebook, YouTube and Spotify platforms. Jones, who is currently in court for continuing to perpetuate the conspiracy theory that the Sandy Hook massacre didn’t happen, has been facing an increasing backlash over his Infowars content.