Sky News is no stranger to retractions and apologies in recent months.

Sky News was quick to apologise on Sunday for its interview with fascist and convicted criminal Blair Cottrell, promising an investigation into how he made it on-air in the first place.

But it’s far from the first time Sky has apologised or withdrawn for offensive or defamatory material it has published, so we thought we’d take a look back at some of the highlights of News Corp’s news channel, which will next month launch a free-to-air service on the regional WIN network.

Sky News presenters Rowan Dean and Ross Cameron apologised on their Outsiders program for on-air comments made by Senator David Leyonhjelm about Senator Sarah Hanson-Young. Days after Hanson-Young had accused Leyonhjelm of “slut-shaming” her in the senate, Leyonhjelm was booked on the show and repeated the comments. An on-screen strap also repeated some of Hanson-Young’s comments.

After their apology went to air, Sky News also apologised from its Twitter account, saying a producer had been suspended (who has since returned to work). 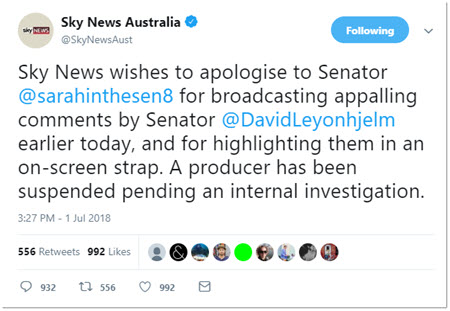 Sky News presenter and reporter Caroline Marcus had to apologise on behalf of herself and the network after she suggested the Nine Network knew about, and covered up, A Current Affair reporter Ben McCormack’s attraction to young boys. He had recently been convicted of child pornography charges. Marcus’ apology stated that:

Some viewers may have understood us to be saying that people who worked with Ben McCormack and Nine and the management of the Nine network and in particular the national news and current affairs director knew of and covered up or turned a blind eye to the pedophile conduct of Ben McCormack. Neither Sky News or I intended to suggest that was the case and apologise for any hurt or embarrassment caused by our discussion.

Sky News apologised to ABC broadcaster Wendy Harmer and then-employee, now-Senator Kristina Keneally, over separate comments made by another then-presenter, Mark Latham. First, he accused Keneally of being a “protegee” of corrupt NSW Labor politician Eddie Obeid, and a few days later said Harmer was a “commercial failure” who only got a job at the ABC because she had a disability.

Sky News reacted by sacking Latham and apologising (although Latham is still a regular guest on a number of programs on the network).

But it’s not always the network itself apologising. Just this year, Craig Kelly and Adam Bandt (twice) have apologised for comments they’ve made on the network. And who can forget poor Greg “Greggo” Thomson, the presenter who resigned last month after apologising for an embarassing MC gig not related to the network at all.

Sky’s presenters aren’t overly generous with apologies. One of its presenters Alan Jones is awaiting judgement in a defamation trial, over comments he made on radio and about the Wagner family’s role in the deadly Grantham floods in 2011.

And last year, Outsiders’ Ross Cameron refused to apologise for referring to The Sydney Morning Homosexual in a speech at a conservative fundraiser, telling Sky News colleague on-air: “I don’t see a single sentence of my remarks which is critical of gays. I gave a very pro-gay speech in which I said gays have been associated with the creative class since the beginning of history.”

Forget Utopia and House of Cards, the golden age of political TV is finally here

A Sky News apology is as phoney as a $3 bill. If you accept it, then you’re gullible & a little bit thick.

Sky’s motto is it’s best to ask for forgiveness than seek permission!…….

Just finished reading a book about vampires and their fear of light and the need to only be active at night. The weird and altogether spooky ghouls that inhabit Fox TV after dark have some most unsettling similarities.

They and their type only apologise when they are caught. Rather like banks, pollies, sportsthugs etc.