The editor-in-chief of Harper's Bazaar has quit, and she hasn't done anything to hose down rumours on her way out.

Harper’s Bazaar boss quits while she’s ahead, a new Sky offering for regionals, the Great Barrier Reef Foundation comes into question on Twitter, plus other media tidbits from the day.

Bauer’s revolving door. The editor-in-chief of Harper’s Bazaar Kellie Hush has quit, becoming the latest to leave publisher Bauer Media. Kellie Hush announced on Instagram over the weekend she was leaving her “dream job” after six years. Fairfax reported she’d secured a backer for a new fashion project. Hush didn’t do anything to hose down rumours that Harper’s Bazaar could merge with Elle, telling Fairfax: “Bazaar is a luxury magazine that can’t be published on the smell of an oily rag, so I’d like to finish my tenure while that rag still smells like Chanel No. 5.”

Bauer has struggled to get by in the Australian market since it acquired ACP Magazines in 2012, and has been closing and merging magazines over the past few years.

Sky News’ free-to-air offering. Sky News will launch its free-to-air service on Win next month, including a new breakfast program hosted by presenter Jaynie Seal. The channel will air in regional areas where Win is broadcast, and will include content from Sky News, Fox Sports Australia and Sky News Weather — channels all otherwise only available on cable service Foxtel. Win broadcasts in parts of Queensland, New South Wales, Victoria, South Australia and Western Australia, and throughout Tasmania and the Australian Capital Territory.

The line-up includes news content and some of the network’s more ideological offerings, including programs hosted by Andrew Bolt, Chris Kenny, and Graham Richardson.

Good feud guide. Network Ten newsreader Hugh Riminton has called out Nine’s Today host Karl Stefanovic over his support for the government’s $444 million handout to the Great Barrier Reef Foundation without declaring the group has been a Today sponsor. Stefanovic was responding to the government’s surprise grant to the small, private foundation, talking up the organisation.

Riminton asked whether it would have been “appropriate to mention” the foundation had sponsored a Today event — something Stefanovic was apparently unaware of. 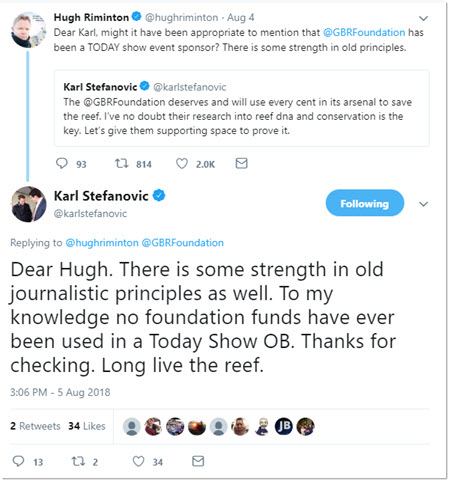 To celebrate the show’s 35th year in June, the Great Barrier Reef Foundation was a sponsor for a “We Love Australia” week, which included a show broadcast from Hamilton Island.

It’s media reporting week. There are media reports that 87-year-old Rupert Murdoch will be making his annual visit to Australia later this week. But will he make it in time for the analysts’ briefing at 7am on Friday, or will it be CEO Robert Thomson and CFO Susan Panuccio with His Master’s Voice remaining silent and only available to those at Holt Street HQ in Sydney? 21st Century Fox reports on Thursday, but that briefing is normally handled by Murdoch sons Lachie and James out of LA/New York.

News Corp and its 61%-owned subsidiary, REA Group (its single most valuable asset) will release results on Friday morning. Investors will be looking for an update from the Murdoch sons on the progress of the deal to sell assets to Disney (which reports earlier in the week) and whether it will persist with its mop up bid for Sky plc in the UK or cede the deal to rival Comcast.

Glenn Dyer’s TV Ratings. New programs all over the remote last night, plus an oldie or three. Nine returned The Block (1.575 million, down just 41,000 from last year’s start), Seven returned Little Big Shots (1.487 million nationally, down 932,000 from 2017’s debut) and Ten returned Russell Coight (1.335 million nationally — its back after 16 years) and gave us Street Smart on debut (581,000, flop). Meanwhile on the ABC it was the start of the annual UK House of The Year with Grand Designs (879,000). Tonight more Block plus the return of Doctor Doctor on Nine. Seven debuts Dance Boss and the ABC brings back Australian Story.

Nine won the night easily and the demos, Ten went backwards, as Russell Coight’s solid return wasn’t supported by anything else in Ten’s line up. The network finished a weak fourth in total people and the main channels (its main channel share of 8.0% was Murdoch-like) after the ABC and its average line up — Jack Irish’s second last ep, 1.084 million viewers.