CNN sucks. Supporters at a rally for US President Donald Trump have heckled CNN reporter Jim Acosta by chanting “CNN sucks” as he reported from the Tampa event. Trump’s son Eric tweeted about the chanting saying it was “truth”, and was retweeted by his father.

Acosta later tweeted he was worried about the hostility towards the press. 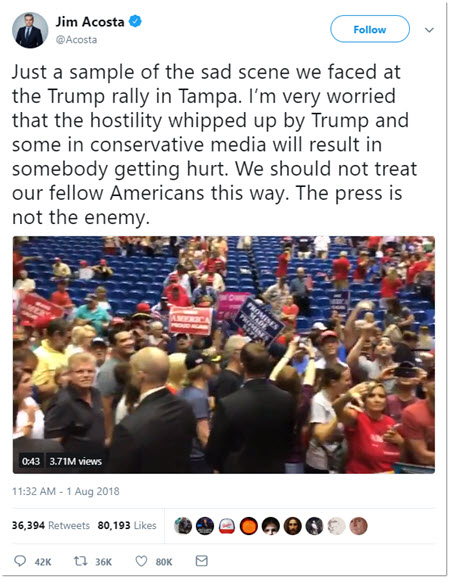 Snopes editor fired. The managing editor of troubled fact-checking website Snopes, Brooke Binkowski has been let go. She told Poynter she doesn’t know why — she’d been told there had been complaints, then she was told her role had been made redundant:

‘To me, this is symptomatic of a much larger problem of transparency within the company. Nobody is forthcoming with information that dramatically affects editorial. One of those things was me not knowing if I was in trouble,’ she said.

The website asked readers for money to fund a legal battle against the site’s owners, saying they were refusing to relinquish revenue.

Glenn Dyer’s TV Ratings. Australian Survivor returned to Ten last night. Ten says its audience was up 17% on a year ago — 923,000, 716,000 in the metros and 207,000 in the regions, which is hardly anything to boast about. That was 12th nationally. The most popular non-news program last night was the second ep of Seven’s Highway Patrol with 1.04 million. The first ep was watched by 952,000 people nationally, so the average was 998,000 for the hour from 7.30pm. Seven also started airing a new reality program (in the same genre of Highway Patrol/Motorway Patrol etc) called 9-1-1 at 8.30 pm — 893,000 nationally. Read the rest on the Crikey website.

Decent Australians will applaud the courage and humanitarian commitment of Chris Graham and his associates and, conversely, utterly condemn the pro-Apartheid Israel and hence pro-Apartheid Coalition Government and Labor Opposition who are cravenly silent in the face of the criminal and violent kidnap of an Australian citizen on the high seas by the genocidally racist, neo-Nazi Israelis. The US lackey, Zionist-subverted Australian Coalition Government has made Australia second only to Trump America as a supporter of nuclear terrorist, racist Zionist-run, genocidally racist democracy-by-genocide, neo-Nazi Apartheid Israel. Half the 2 million inmates of the Gaza Concentration Camp are children and three quarters are women and children – decent Australians will utterly reject the pro-Apartheid, Zionist-perverted Lib-Labs (Coalition and Labor Right), vote 1 Green and put the Coalition last (see Gideon Polya, “Australian xenophobia targets China but ignores huge Israeli subversion of Australia”, Countercurrents, 7 July 2018: https://countercurrents.org/2018/07/07/australian-xenophobia-targets-china-but-ignores-huge-israeli-subversion-of-australia/ and “Subversion of Australia”: https://sites.google.com/site/subversionofaustralia/ ).