What exactly does Mark Latham earn as a parliamentary pension? Plus, health records, old and new take the spotlight again.

Health records compromised (but not where you think), the ongoing crime of CEO pay and it turns out Mark Latham gets even more of your money every year than we thought.

Ochre not in the best of health. What is going on at Ochre Health, the Sydney-based healthcare services company? A tipster tells us that earlier this month, all the patient data — including doctors’ notes and test results — was lost from 10 Ochre Health practices across Australia. As we understand it, data from the past year is still missing, but the majority of it has now been recovered.

“Important test results have disappeared. A cancer diagnosis may be one such test. How is a doctor with 4000 patients expected to contact their patients who are waiting for test results? All information about who made appointments in the last year is gone,” the tipster told Crikey.

The tipster said at this point, it was unknown whether the lost information was the result of a hack, or a a separate technical issue.

Ochre Health Chief Executive Officer, Dermot Roche told Crikey there had been a detailed investigation by a specialist IT provider who had informed Ochre there is no evidence that patient information has been accessed, stolen or shared.

“Patients attending the medical centres are being advised of the situation and each practice is being kept up to date so that patients queries can be addressed,” he said.  “We are working closely with all sites to ensure the teams are fully supported as we work through the issue.”

Quite apart from the sensitive patient information that has been compromised, our tipster points out this has huge implications for individual GPs.

“GPs spend two to three unpaid hours on average each day writing notes. These notes are legal documents that can be used as evidence in court, for instance. All protection offered to GPs in case of a lawsuit is gone,” they said. “This places another burden on GPs, who work each day in livid fear of being sued for malpractice.”

“We are treating this matter with the utmost urgency. We are trying every option open to us to restore the data in a safe and secure manner,” Roche said. “Two of the ten impacted servers have already been restored and recent IT restoration work is showing strong positive signs that another three servers are close to full restoration. Work on the remaining servers is ongoing.”

The ministry of truth. On the subject of that other health records issue, tipsters have been getting in contact to tell us about their nightmares trying to opt out of My Health Record. One Crikey reader attempted to provide some pretty forthright feedback as they went, only to find this was classed as “invalid”: 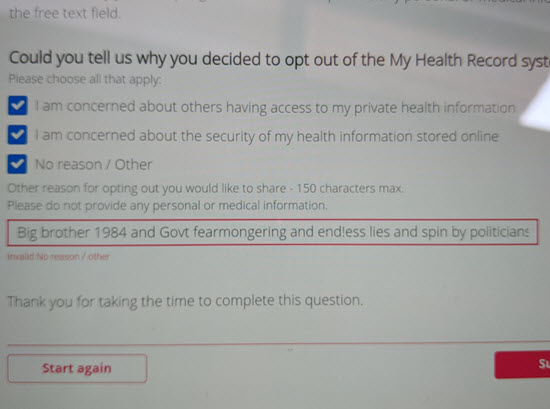 As it turns out, the Orwell reference was not what the computer rejected, but the typo that put an exclamation mark in place of a letter, so, as the tipster put it “feel free to give any reason you like, just don’t exclaim!!!”

The shift continues. Ms Tips grudgingly began her month-long stint paying attention to Mark Latham yesterday — to point out that the man who screams “rorting aristocracy!” at the drop of a MAGA hat himself receives $80k in public money every year. But actually, as a tipster has pointed out, Latho’s parliamentary pension is a lot more than that. “Old-school pensions were linked to current parliamentary salaries (not as they were when the MP retired), so go up in line with any parliamentary pay rises.” Our tipster calculated Latham is “currently on a pension of $129,000 per annum, inclusive of his time as Leader of the Opposition and other additional roles”.

Why are Australians so afraid of My Health Record?

Norway's digital health record system stands in stark contrast to ours: it is welcomed by the majority of the population.

Good morning, early birds. The future of the NEG is on the line at today's COAG meeting. Plus, yet another call for boycott of My Health Record. It's the news you need to know, with Chris Woods.

Good morning, early birds. My Health Record's capability to store DNA data is under serious interrogation. Plus, it's a big week for the superannuation market. It's the news you need to know, with Chris Woods.

I can’t think of anyone less deserving of that parliamentary allowance than Latham. A list of possibles went through my head, but no, not a one. He adds nothing to anything. He subtracts.