A report obtained by Crikey via freedom of information indicates that the government agencies in charge of My Health Record could have easily anticipated public concerns.

Current concern around the government’s My Health Record roll-out could have been avoided had the Department of Health addressed the issues raised in its own consultation period. Almost all of the system’s privacy, security and health issues were anticipated as far back as 2015. However, those who made submissions were left in the dark because the analysis report was effectively buried.

An exclusive report, obtained by Crikey via freedom of information, shows that extensive communication to consumers and ease of opting out were identified as necessary elements of the scheme. However, the government branch responsible for the roll-out of My Health Record, the Australian Digital Health Agency (ADHA), has failed to follow through on these points.

Many of the consultation submissions stipulated only conditional support for an opt-out approach. Indeed, the report observed that privacy and security were recurring themes of the submissions and that communication and education were consistently highlighted, especially with regard to marginalised populations. 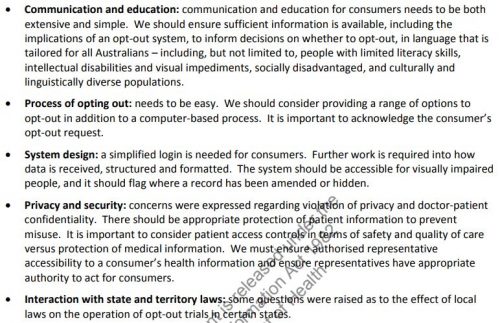 The report recommended that communication be “extensive and simple” and yet ADHA obstinately refused to engage with the public until the very beginning of the opt-out window. The particular needs of people with limited literacy skills, people with intellectual disability, and linguistically diverse populations are also acknowledged. Nevertheless, the opt-out portal has stringent ID requirements and is only offered in English.

The report also notes the crucial health concerns in relation to doctor-patient confidentiality. In order to receive safe and accurate medical advice, people must be able to speak honestly with their doctors. The report sensibly calls for “appropriate protection of patient information” yet ADHA is authorised to disclose medical information in a dubious variety of non-medical contexts.

The Health Department and ADHA have been aware of the issues surrounding an opt-out e-health system for years. Why was the report never published? And why did ADHA proceed with the rollout in such a furtive way when it was warned well in advance?

Some organisations have expressed exasperation at the agency’s lack of transparency. Jane Green from sex-worker advocacy group Vixen Collective has been vocal in her disappointment. “There has been a general failure to listen to community organisations,” she told Crikey. “There has been a lack of responsiveness to our concerns which has lead to an ongoing sense of frustration.”

Such apathy is evident in the report. Summarising more than 130 submissions from individuals, healthcare providers, research organisations and government agencies, the report comes to only 10 pages and glosses over the most critical points of the submissions. The particular concerns of marginalised groups, such as people living with HIV and sex workers, are only alluded to.

Moreover, given the anxieties about the secondary use of data, it is interesting that the report notes that private insurers were concerned about regulations which would prohibit them from accessing an e-health system. For its part, insurance giant Bupa argued that it was “essential that no unnecessary barriers are in place which hamper health insurers” and that, therefore, they should have access to the system.

In his May address to the National Press Club, ADHA CEO Tim Kelsey dismissed concerns that his agency was obscuring details of the policy. Such repudiation was hard to take seriously. The presser itself had only been announced the day before with minimal fanfare, and Kelsey went on to confirm that there would be no national mail, radio or television advertising campaign.

Instead, in a curious imagining of “extensive and simple” communication he announced that GPs, pharmacists and, bizarrely, Australia Post employees, would be enlisted to educate the public about the e-health system. However, people might rightly question why ADHA would proceed with an opt-out arrangement at all given the apparent difficulties?

Political one-upmanship could be one motivation. When announcing the trials in 2016, then-health minister Sussan Ley explained that an opt-out approach would lead to an “increase in the creation of records” compared to Labor’s “failed” opt-in system.

However, it seems that the enthusiasm for opt-out ultimately comes down to the allure of citizen’s private data. The elements of My Health Record that have little to do with personal health make it clear that the data is valuable. Consider that there is no medical reason to retain information after someone has cancelled their record. There is even less reason to keep possession of an individual’s health data after their death.

Of course, an e-health system could deliver benefits to some consumers, but ADHA’s decisions have left many doubting its competence or its intent.

Joshua Badge is a lecturer in philosophy at Deakin University. You can find him on Twitter at @joshuabadge.

Not avoidable, at all except if totally abandoned!! more evidence that this DATA grab, is just for the benefit of corporations/donors and has absolutely no credibility as an aid to improvement of the health of the individual or community. More installation, by supposed stealth, of the big brother is watching you, lack of freedom of choice, an attack on privacy and democracy.

By the by, Opt out not available so far this day, as the Medicare system is in suffering the usual data( mis) management systems failures! Further to online stuff ups that will not be available in a “data provision essential lifesaving emergency”, should you mistakenly be, on record via myhealth! Retain your own, very private health records.

Like the changes to the Census. What is the real intent?

This sounds a lot like the facebook “business model”. Slurp up the data of, I’m told, 15 million monthly active Australian users and regurgitate it into the troughs of sales forces on a “Who Pays, Wins” basis. These users cannot trust Zuckerberg more than Medibank, surely?

Well I beg to differ, though I certainly support the right of people to opt out, and to do so simply at any time of their choosing. Ultimately there is a judgement to be made by every adult individual as to whether their interest is best served by being in, or out. For my family that judgment is clearly ‘in’. We travel, two of us have significant health issues to be managed, and confusion and delay could have quite serious complications. I expect all data, ultimately, to be breached. Over the range of data routinely captured legally and with my consent I would rate medical records as very low on the ‘hurt consequence’ list. (Financial records would be much higher. They too will likely be breached, one day.) For others that ‘hurt consequence’ will be much higher, and opting out will be the rational choice. But for most of us, and for those who don’t care, staying in offers the prospect of avoiding bad health outcomes at a personal level, and better health outcomes as a community.