Jetstar and the Transport Workers Union prepare for battle. Plus other spicy tidbits.

Queensland Health is a messy bench who loves drama, Turnbull’s amusing homepage, and is there going to be a stoush between Jetstar and the Transport Workers Union?

I’ll fly away. We hear that the Transport Workers Union could be getting ready for a stoush with Jetstar Australia. A tipster told us the airline has engaged a foreign crew who are now flying domestic flights across Australia — we’re told these crew members are not paid the relevant agreement rates and are denying work to Australian casual workers based in Adelaide.

We’re told the TWU is aware and has raised this issue with management, and, in a sign it’s not going well, our tipster says the media may soon be involved. But obviously, not just yet. We asked the TWU about the dispute, but they didn’t get back to us before deadline.

A spokesperson for Jetstar told Crikey the overwhelming majority of Jetstar cabin crew were Australia based and that this number had been increasing.

“The use of overseas based crew operating tag flights across our network is extremely small and reducing. Currently less than half a percent (0.6 %) of our flights are tag flights operated by overseas based crew,” they said. “The only recent change in patterning of these crew on tag flights was during the busy school holiday period in July when we rostered more (still within the 0.6% total) on our Adelaide-Darwin-Bali route.  This allowed us to free up more Australian-based crew to operate on our expanded domestic schedule. The usual rostering has already resumed.”

They added that these employee arrangements were compliant with Australia’s employment laws.

Turnbull’s witty webpage. There are many things one could accuse Prime Minister Malcolm Turnbull of — and we here in the Crikey bunker have often tried to be the first and most forceful of his accusers — but one charge he escapes is that of humourlessness. Remember him slaying the mid winter ball with that routine about his performance in the polls and relationship with Donald Trump? Or that downright gorgeous rejoinder at Labor’s communications spokesman Jason Clare back in 2015 — “Out it comes, a literary Exocet, aimed at the heart of your victim. How can I take the pressure from the shadow minister, he is almost as deadly as his master …”?

It appears this is also true of his website. If you make a mistake navigating the PM’s website you get a greatest hits of Turnbull catchphrases: “There has never been a more exciting time to be on my website but you appear to have innovated the wrong URL”, before encouraging the visitor to “be agile”, and return to his homepage. We asked the PM if this was his idea, or the work of a waggish web designer, but he didn’t get back to us before deadline. 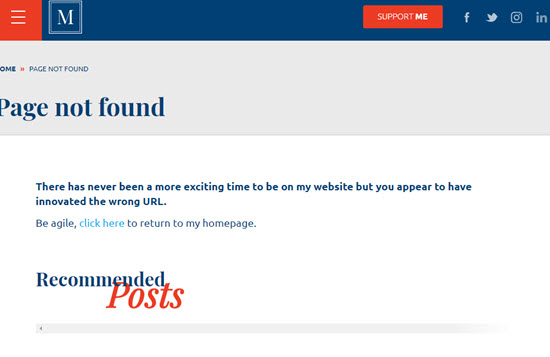 The Oz‘s analysis less than super. Get into self-managed super funds, seems to be the advice in The Australian today, in a piece from Glenda Korporaal “Why self-managed super funds must be encouraged, not curbed”. Korporaal correctly acknowledges the significant limitations of SMSFs but overall concludes “SMSFs only suit a specific sector of the market but they play an important competitive role in the sector, particularly for those who don’t want to bank on the government for their retirement.”

Problem is, you’re more likely to end up depending on the government if you have an SMSF because, according to the Productivity Commission, industry super funds generate average returns of 6.8% a year, compared to 5.6% on average for SMSFs. That’s one hell of a difference across a couple of decades — but admittedly SMSFs are better than retail funds, which the PC says only manage 4.9%.

The other problem is, SMSFs aren’t covered by the same protections as both industry and retail (and corporate) funds are when it comes to fraud and theft: if your SMSF is the victim of financial misconduct, you’re not entitled to compensation. One estimate is that SMSFs have lost $100 billion over the last 10 years due to misconduct. But hey, if that happened at least you wouldn’t be relying on the government – except when you apply for the aged pension. Thus, from now till August 9, it’s our task to point out that Mark Latham is on $80,000 parliamentary super for life, which, given the absurd imbalance between time served and super payout means he is effectively living off a statutory rent, which is pretty much the definition of being an aristocrat! Still, the peasants of Penrith will be glad that the Laird of Liverpool is sufficiently unencumbered by work to have time to speak up for them. Whew, that’s done. Illywhacker‘s got Latham duty next, till September, then Pedestrian.tv takes over. We were rostered on for Nick Cater, but I think the libel courts have now got that brief.

Anti-Vaxxers pricked. Look, we all get bored with colourless, diplomatic and ultimately meaningless answers from government around contentious topics. So it’s only right that we recognise good work when we see it. The Courier Mail got in contact with Queensland Health for comment on the “irresponsible and dangerous” anti-vaccination documentary Sacrificial Virgins — which claims, among other things, a link between HPV vaccines and neurological damage. It’s pretty awful sounding stuff,  so shout out to the Queensland Health spokeswoman who came up with this sassy response, as well as every bureaucrat along the line who said “Yep. Send that out”:

“If anyone wants to watch a fantasy film we recommend Moana. It is currently on Netflix.”

The airline that could kill off Australia’s low-cost carriers

The airline Norwegian is shaking up the aviation industry, exploiting opportunities to do to established carriers what Qantas wanted to do years ago.

How to avoid being gouged — or crushed — in Christmas travel

Do you go full-service or low-cost carrier? Both have drawbacks. But there might yet be a way to score a reasonable fare for summer travel.

Is this the end of cheap airfares? Qantas winning airline wars, but the real loser is you

Qantas and Virgin are rolling back cheap airfares. And that is very bad news for the flying public.

Then The Curry or Maul editorialises on “Crackpots need dose of truth”? From the way it “edits” what it doesn’t want the state to know?????
For fear more of we rubes being vaccinated/immunised againt it’s message of their “Limited News Party’s superiority to govern”?