Labor MP Emma Husar is "horrified" by the allegations against her, but political offices can generally be worse than most workplaces for bullying and harassment.

Regardless of the outcome of the ALP’s internal investigation into Western Sydney MP Emma Husar’s workplace and staff management, the allegations made against her paint a familiar picture about how toxic political workplaces can be.

The offices of politicians have several characteristics that predispose them to being more likely to feature bullying and harassment. That doesn’t mean many politicians don’t inspire great loyalty, affection and respect from their staff. Working for a committed and dynamic politician can be a truly uplifting experience. But working for the wrong one — and there are many of those at federal and state level — can wreck your life.

First, MPs can’t be sacked. Unless you’re the CEO, it is becoming harder for company executives to survive sexual harassment or bullying allegations. Corporations have begun to understand the price they pay if they fail to act to deal with bullies and harassers — although there’s still a long, long way to go. But no such progress is even possible in political offices. While MPs are vulnerable to paying a political price for allegations of harassment and bullying, they literally can’t be sacked except in the most extreme of circumstances. They occupy an office that has a different form of accountability than most of us who must account to managers, senior managers or shareholders for our behaviour.

Second, lower house MPs’ offices are usually high-pressure workplaces. The job is demanding of time and energy, with long hours expected and weekend work. Constituents come to MPs with all kinds of problems, often at the end of their tether after failing to get help elsewhere. Many workplaces, of course, come with long hours and heavy demands, but MPs combine the roles of social service, PR outlets and travelling salespeople.

Third, MPs and their staff often have a more than purely professional relationship. Many people working for MPs — and most who work for ministers — are political colleagues, who are there not just because it’s a job but because of their commitment to a political party. Few people are likely to be deterred from reporting harassment because it might make a corporate employer look bad, but the urge to downplay things for the good of a political party is very strong, with staffers sometimes expected to take a bullet for the cause, with the understanding they’ll be rewarded later. The result is less pressure from a party on individual MPs to curb their own behaviour.

Fourth, politics attracts people with egos. There are plenty of introverts in what you’d assume is an extroverted profession, but few shrinking violets due to the nature of public office. This is particularly true in the major parties where preselection for winnable seats is usually strongly contested. Sometimes these are people who have a rather instrumentalist view of other people and, particularly, their staff.

The combination of these factors means that political workplaces are more likely to see bullying and harassment, even if the majority of politicians on all sides are decent, professional people to work with. It means there’s more pressure on staff to suffer in silence, and it also means politicians will rarely lose their jobs — even if they are revealed to have behaved badly — unless it becomes a political imperative for their party to dump them. 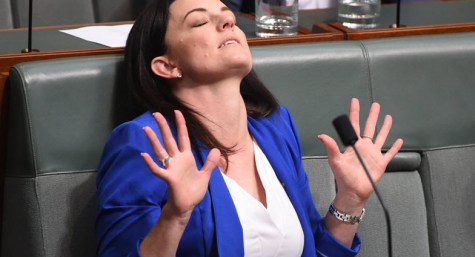 So, you’ve been accused of bullying: what are your rights in the workplace?

I presume that this is an internal ALP investigation rather than one done by the “employer”, the Parliament, because the staff concerned wanted to keep it in house. Doesn’t seem to have worked.

Worth noting that some staff may put up with unacceptable behaviour by an MP because one day they want to succeed him/her.

High pressure workplaces? give me a break. How many workplaces have you ever graced? constituents at the end of their tether and failing to get help elsewhere? Do you think that a local bog standard bloody MP will give a shit? they will bounce you to the relevant minster of the relevant department you ahve a query with a trot ou the stock standard line. High pressure!? for the poor staff yes but the pollie who has a captive audeniece in this country of compulsory voting otherwise you will face a hefty fine for crap service. Give me a goddam break!!
what job isn’t demanding of time and energy.
they are a bunch of arrogant and out of touch, amoral or immoral primadonnas.
They deserve nothing less than gaol or pecuniary loss.

Keith Miller quote(nugget)”Pressure is a Messerschmitt up your arse”! comes immediately to mind, perhaps that is the solution to all political bullies, propagandists, chancers, liars, and list goes on.

I frequently walk my dogs, and infirm neighbours pooches and I am a diligent pooper picker-upper, wish I had had the opportunity for a break outside during the course of my employment! Just saying…. this may not be a case of bullying or demeaning in the mind of the pooper-scooper, perhaps a welcome relaxing break, from the Messerschmitt office scenario.

Never underestimate the willingness of partisans such as GF50 here to obsfucate and excuse the worst sort of behaviour and abuses on their side of politics rather than spending the same amount of time working to remove the cancerous individuals from within their Parties.
There’s a reason Eddie Obeid had such a fruitful career in NSW Labor

How in the hell do you work out that I am a partisan. You are obviously what? open minded enough to allocate blame me, partisans, for Obeid the cross political party corruptor ? Please stick with what you know. Secondly have you heard the expression better to be thought a fool than hit the keyboard and prove it.

We understand how your mind works Danny, but you are at the wrong paper. Back to Bolt and Devine with you….

Is it not interesting that everyone assumes bullying (whatever that may be in this case) has happened. As far as I have seen no-one has named the victim or given details of what bullying to which they were exposed or indeed who did it.

And there’s the rub, how can she be anything but “guilty” now?
If she has very little to answer for (beyond the usual “call of duty” for a lot of staffers) – that allegations were vexatious – the inquiry will be branded a white-wash.
That this was aired before the result of that investigation was handed down – “because the ALP did nothing before” – seems to prejudge that result?

Is she “Pat Malone” – different to any number of other members?
“You have to move on, to make room for my …..”?

I am a regular visitor to the office of Jason Clare. He has an exemplary work place with people eager to work for him. All staff are treated equally and are willing to do extra hours without extra pay. As a Shadow Minister whose portfolio areas cover the whole of the country, he is frequently travelling which means there is an additional workload for his office staff. This they do because of the loyalty he engenders. No doubt he must feel frustrated at times by the behaviour of his parliamentary colleagues. However he never shows this. Jason leads by example and parliamentarians of all persuasions who want to discover how to run an office efficiently, effectively and collegially would learn much by visiting the Blaxland Electorate office.