The ACTU boss Sally McManus has met with journalists to allay their concerns about being locked out of union events.

Union makes peace with journalists, Sunrise comes out swinging against Media Watch, New York Post laments its fallen enemies, and other media tidbits of the day.

Unions smooth out access spat. ACTU secretary Sally McManus has met with journalists banned last week from covering Opposition Leader Bill Shorten’s speech at the ACTU Congress dinner. Journalists’ union, the MEAA, formally complained to the ACTU over the restricted access. Its media president Marcus Strom said yesterday the meeting with McManus was “cordial and professional”. He tweeted: “McManus assured MEAA members that the situation where journalists were excluded from covering the keynote at the congress dinner will not arise again.”

Good feud guide. After facing criticism last week for pinching Four Corners’ Thai cave diver interviews, Sunrise has spat the dummy over Media Watch’s examination of the “error” this week. In its Monday program, Media Watch criticised Sunrise’s repeated use of ABC footage without credit — and Seven wasn’t happy the program didn’t air its statement. Seven’s corporate account tweeted yesterday that it was because “it didn’t fit their pre-determined narrative”. 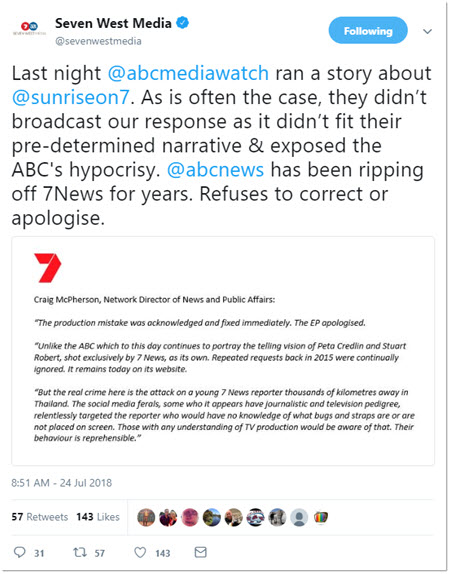 Seven, and its political editor Mark Riley, claimed on Twitter that the ABC uses Seven’s footage without attribution too, referring to 2013 vision of Peta Credlin. Media Watch annotated Seven’s response on its website by saying that footage was part of a “vision swap”.

Daily News fallout. Even the New York Daily News’ bitter city rival the New York Post has joined despair at the Daily News’ “restructure” announced yesterday. The Post’s editorial board wrote yesterday that the devastating layoffs — which claimed half the newsroom — were bad news for New York:

Yes, the News has been The Post’s competitor for decades, and the rivalry’s often turned bitter. But rivalry has its joys as well: Even getting beaten to a story is an inspiration to do better next time … We want to beat the News, but not like this.

Other Post reporters noted the empty seats reserved for the Daily News in the baseball press box. 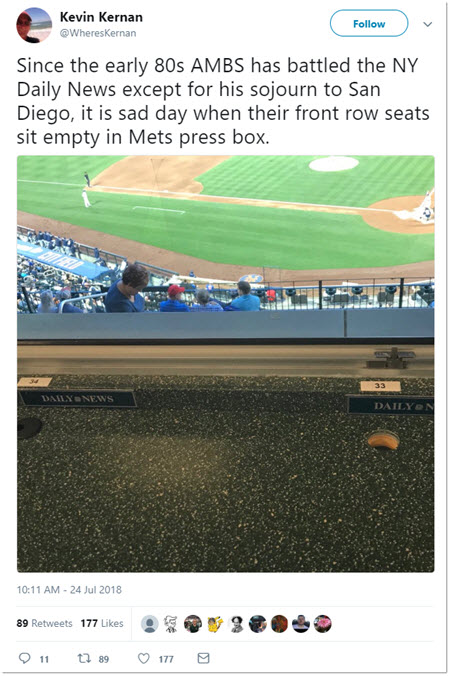 The Daily Beast has reported on how the layoffs went down in the office, saying owner Tronc — which bought the paper for $1 last year — had fed it kryptonite.

Impending layoffs had been rumored for weeks, although staffers were shocked by the magnitude of the bloodletting. Late on Sunday night, Tronc sent an ominous staff-wide email that seemed to confirm everyone’s worst fears: ‘Team, Please plan to be in the New York newsroom on Monday at 9:00 AM for an important message from Grant Whitmore.’ The meeting lasted less than a minute … He simply advised the assembled journalists, in a matter-of-fact tone, that they should check their email boxes in 10 minutes.

Guardian slashes losses. The Guardian, which was close to imploding two years ago and fading fast, is now on track to break even next financial year, the annual results of the parent company Guardian News and Media Ltd revealed overnight. A combination of cost cuts in 2016 and 2017 (with more than 400 jobs going at the paper, printing operations and at its US online business) and a move to raise funding from readers has helped stabilise the company and the paper. The company’s losses have been slashed from £57 million to £19 million over the two years to April this year.

For The Guardian and The Observer, the saviours have been the hundreds of thousands of people who support both papers through donations. Guardian Media Group includes reader donations in its digital revenue figures and said it secured one-off contributions from 375,000 people, with another 340,000 making monthly donations. This is in addition to 230,000 people who subscribe to the newspaper’s print or online editions. — Glenn Dyer

Glenn Dyer’s TV Ratings. Seven’s night, Nine’s night. It was tight — demos were shared. But the core ratings battle saw Seven’s House Rules with 1.36 million national viewers easily beat MasterChef on Ten with 1.32 million and Nine’s Australian Ninja Warrior with 1.11 million. That underlines just how much of a flop Ninja Warrior has been in its second start. In regional markets Seven’s 6pm News was again number one with 592,000, followed by House Rules with 542,000, then Seven News/Today Tonight with 477,000, Home and Away with 431,000 and the 5.30pm bit of The Chase Australia with 403,000. Read the rest on the Crikey website.