Australian literary festivals and the optics of outrage

A writers or "ideas" festival isn't complete without at least one incongruous and controversial addition. But who benefits from this, and is this cycle of outrage sustainable?

As with most teacup storms these days, this one began on Twitter. On July 12, as press for this year’s Canberra Writers Festival program went live, there was a general sense of confusion among its audience as scandalised former deputy PM Barnaby Joyce was named a headline act alongside the like of bestselling author Matthew Reilly.

Considering Joyce’s notorious love of the limelight and the fact his debut title was yet to even hit shelves, Twitter users questioned the festival’s decision. Does Joyce really need another platform? Also, where were the worthy women writers?

The ensuing public spat followed the usual template: audiences expressed consternation; a CWF board member responded to one thread among many, tossing out a few daytime TV cusses for good measure; the whole thing was deleted within hours; and an apology came from CWF the next morning. Everyone dusted theirs hands, ready for the next boil-over.

As it turns out the festival has in fact programmed a relatively even gender split — by its own count, 90 women to 82 men, although these numbers don’t take into account who is being given the most prominent positions in the festival. But with Brisbane Writers Festival now facing its own mini-controversy over Germaine Greer and Bob Carr — with the acting chief executive concerned that the media’s interest in minor appearances from the authors “would overshadow the other 140-plus writers on the program” — the cycle of outrage and reaction rolls on.

What’s at stake here? And why is this tomato throwing (or beetroot tossing) so familiar in the festival scene?

Joyce’s Weatherboard and Iron: Politics, the Bush and Me was picked up by a small publishing house in June and is to be published in August, in time for the festival (with little chance for editorial tinkering). You might think the launch of such a book is not really the flashy extravaganza directors would choose to open their literary gala. CWF disagree. The program describes the event as “not-to-be-missed”, a “spirited session … [providing] rare insight into the controversies that have plagued his recent career.” The audience is practically promised hot goss.

Putting the disgraced former deputy PM on opening night of a cultural festival is not a neutral act, and Barnaby is a clear winner in the situation. Here we are, again, talking about him, and this time he gets an opportunity to soak up the respectability of literary world; a rep-recovery sessions aimed at middle-class Australians.

In return, CWF gets a few headlines and a minor headache. But they also get a new audience. It’s notable that ticketing for the event is $90 for non-members of the Press Club. (CWF’s one-on-one talk with Matthew Reilly is a comparative steal at $30–35.) Appeasing a new audience creates new avenues for donations too.

Of course, Barnaby’s inclusion isn’t outside the CWF’s theme of “Power, Politics and Passion” — employed for the third time in as many years, making it less a theme and more a guiding principle. But the ways in which CWF has applied this theme is uninspiring; it seems to be holding up power, rather than critiquing it in any substantial way. Politics is presented as theatre sport, and passion as the perpetual I’m Definitely Not Mad face of a disgraced politician.

CWF began in 2015 with the financial support of the ACT government before forming a programming partnership with Melbourne Writers Festival the following year, but CWF’s politics-heavy weekend this year sits in stark contrast to MWF’s recently launched program. The first for new director Marieke Hardy looks to be a never-ending party in comparison.

Even this festive program, however, comes just a few years after MWF had its own social media blow-up with Mark Latham’s now infamous in-conversation event in 2015.

Appearing little over a week after he was sacked as a Financial Review columnist for being caught out making noxious comments about women on Twitter, Latham gave little attention to the expected niceties of literary events. He attacked his host, his audience, and whomever came between Latham and his pedestalled free speech. Twitter erupted and MWF soon issued a statement saying: “We’re disappointed in Mark Latham’s #MWF15 appearance today. Not the respectful conversation we value”. Naturally, the counter went: what did you expect?

The Right Wing Raconteur is not a new addition to the writers’ festival circuit, but the phenomena of festivals walking back their own programming choices after the fireworks go off might be. Whether it’s Boris Johnson at MWF in 2013, or Lionel Shriver at the 2016 Brisbane Writers Festival — both keynotes — the Raconteur is platformed, before being quickly tut-tutted by their own booker. But there is always an audience. Are attendees hoping for fireworks, waiting for the rails to fall off? To say: I was there?

There have been whole festivals designed to satiate peak outrage, including Sydney Opera House’s Festival of Dangerous Ideas (FODI) and Dark MOFO’s recently instigated Dark and Dangerous Thoughts. FODI, which promised to look askance at hot-button topics, was a lightning rod for public discourse and op-ed writers. But with FODI being replaced by the activism-centred Antidote festival last year — “a weekend of ideas, change and action”  — it appears, on the face of it, that controversy for controversy’s sake might be in recession.

This year in the capital, CWF gets more than one chance for a predictable explosion. The final day of the festival will play host to former PM John Howard. CWF chairman Allan Behm suggests, “Mr Howard has been one of the biggest figures of the last 20 years in Australian politics, so it’s prudent that he gets some airtime.” Pray no one in the audience has a Twitter account, lest the tea spilleth over.

Correction: The original version of this piece incorrectly stated Canberra Writers Festival was initially formed in partnership with Melbourne Writers Festival; in fact, MWF partnered the year after its inception. 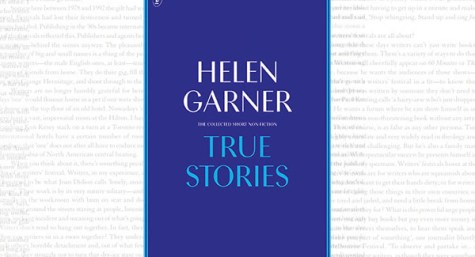 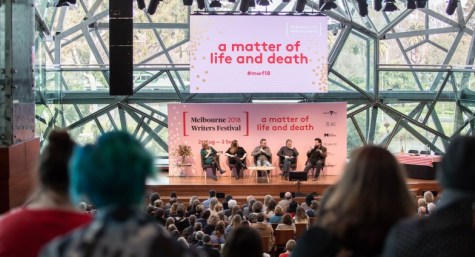 The true point of writers festivals

“Putting the disgraced former deputy PM on opening night of a cultural festival is not a neutral act, and Barnaby is a clear winner in the situation. … In return, CWF gets a few headlines and a minor headache. But they also get a new audience.”

Maybe, but they lost me. I loved last years CWF and was looking forward to this one. First the website, promised to be open from midday Friday, finally opened at midday Sunday. When I saw the program with Joyce as the headline and few others to attract my interest, I gave up and decided not to bother. To me Joyce is a symptom of all that is wrong with Australian politics today and I refuse to give any support to the man or his book. For his gross mismanagement of the Agriculture and Water Resources ministries alone he should be before the courts.

I vote, I have income and I choose no.

Here, here! Don’t give the waste of space any oxygen.

The following is from my work-in-progress ‘Yarraville Confidential’ a satiric epic on contemporary Australia. As well as entertaining I hope it shows my attitude to Writers Festivals

The narrator Hailey and her sister Bianca are daughters of Angela the Labor Member for Alphington and Victorian Deputy Premier. Eddie Moon (‘the thinking man’s Mark Latham’) is a former luxury car salesman now Member for South Yarra. Things come to a certain head when Angela and Eddie are on a panel at the Melbourne Writers Festival, the topic: ‘Gender’

One Melbourne Writers Festival Q and A
my sister and I went to see our mother
as panellist on some chat show roundelay.
‘I read of course as much as any other
but don’t exactly write,’ she chose to say.
The Moderator sought with charm to smother:
‘The writing outlook’s bright and getting brighter
since everybody nowadays a writer.

Our topic for discussion is The Genders.
We’ve come a long way (panellists agree?)
from days of girdles, stockings and suspenders.
But here we’ve one whose potent recipe
ignites his most virulent defenders
with back-to-basics wit and repartee.
Eddie Moon requires no introduction.’
And how we booed this archpriest of destruction.

‘I most respect,’ he mused, ‘the girl next door,
the apex of Australian womanhood.
Who wouldn’t hold her purity in awe?
Does Feminism do her any good?
Quadrant says it’s Marxist to the core.’
But Mum barged in, as we knew she would:
‘Pardon Eddie, here’s some important info,
this ‘girl next door’ might be a raging nympho.

For we have more than mere maternal urges,
it maybe quite enjoyable when you mount us.’
He felt such comments ‘Worse than Stalin’s purges.
Angela, beloved leader, paramount is.’
‘Stop these,’ she parried ‘chauvinistic dirges,
there’s a damn sight more to female/male encounters.
Put it this way, Michela knows not Michael
when she’s subjected to the menstrual cycle.’

The Moderator smiled, ‘We get the gist…
but look, there’s other people on this panel,
a male midwife, a female (men’s) urologist,
a footy mate, straight from the Mateship Channel,
and someone transitioning, there’s an extra twist,
dressing in both taffeta and flannel;
all hoping they can reach some form of nexus
if not in sex at least between the sexes.’

As theories and schemes were now promoted
some objections raised were being met.
With ‘midwife’ dumped, ‘midpartner’ now got floated,
how non-sexist will we ever get?
Though mainly all was banter, sugar-coated,
with remarks that rarely raised a sweat.
The footy mate soon caught on pretty quick:
‘I reckon it’s a bit like kick-to-kick.’

Eddie of course with everybody scuffled
and (metaphor continued) soon was decked.
Though one could sense Bianca getting ruffled:
‘Is this art? You call it intellect?’
Muttering as exit-wards we shuffled
‘Gimme a beer, all tolerance lies wrecked.
How can we get that ‘moderator’ pensioned?
Writers they said and not a book was mentioned!’

A reception next, occurring in the foyer
saw high-priced wines set to make you swoon,
rice-paper rolls being dipped in soya,
a young guitarist with her songs to croon.
This five-star hubbub, worthy of a Goya
all backdrop to our meeting Eddie Moon.
‘Hide,’ said Mum, ‘your hash-pipes and your roaches,
the Member for South Yarra now approaches.

Women, meet our resident Alpha male,
unless of course he finishes as Omega.’
He road the slight, decorum would prevail,
for our acquaintance seeming very eager:
just say the word, he’d be on our trail,
and hinted at some motel south of Bega.
Bianca growled whilst he went ‘Joking…joking…’
then headed out to do a spot of smoking.

Please don’t put Lionel Shriver in the same “right-wing raconteur” basket as Mark Latham or Barnaby Joyce. She is a respected novelist with a well-argued position, albeit one you apparently disagree with.

This writers festival sounds awful, a gathering of the pretentious listening to the delusional.

What will be the next headline act in a wank-fest?
Faux contrarians without a clue.
Agree that likening Lionel Shriver to these carbuncles is droll.