The kind and curious legacy of Jonathan Gold

Pulitzer Prize-winning food critic, Jonathan Gold, is being remembered as the heartbeat of Los Angeles. That's true, but his iconic work influenced a new wave of eaters, thinkers and writers all around the world.

Gold passed away over the weekend at the age of 57. Horribly young, though maybe not young for someone who famously ate at every restaurant on LA’s sprawling Pico Boulevard. His passing comes far too soon after that of Anthony Bourdain, another giant in the food game. While Bourdain was the ripped, tattooed rock star of food writing, Gold was the ruddy-faced, pudgy intellectual in suspenders who you could imagine hunched over a typewriter in The LA Times office, even in 2018.

But like Bourdain, Gold specialised in getting off the beaten track — even if his version was a quiet meal in LA’s Koreatown, rather than a wild bar crawl in South Korea. One Gold review of a Oaxacan molé joint in K-Town could fill it (with mainly white patrons). His wide-ranging palette was reliable, and his writing sharp and clear.

This curiousity and, well, taste, put Gold at the centre of the new wave of food writers, thinkers and broadcasters. He was there in the pages of the amazing (and sadly folded) food magazine Lucky Peach. He was there in Lucky Peach co-founder David Chang’s Netflix documentary Ugly Delicious. He was there in the documentary City of Gold, a whole film about him. He was in magazines like Put A Egg On It and podcasts like The Sporkful and yes, dotted through food podcasts as far away as Melbourne. Food writing has come a long way, literally.

Gold was here in 2015 for the Melbourne International Film Festival, as the subject of City of Gold, where he spoke on a panel with my Ingredipedia co-host Emily Naismith. At the time, she was writing a blog called Emoji Food Review and, instead of being dismissive of this fun emoji-focused blog, he was curious and supportive and generous.

“We kept in touch via email,” Emily recalls. “He would comment on my most recent writing and I’d ask him for advice. Once he told me he mentioned my emoji-review of dumplings at a food conference in upstate New York.”

By all accounts, this is what he did. He supported young people and championed women in a male-dominated industry. The LA Bowl Food Festival which he had a hand in creating and programming had a strong focus on women and people from minority backgrounds.

This engagement and willingness to look at things from different perspectives allowed him to get under the hood of Los Angeles. The best food writing does this. It tells you something about a city — even your own city — that you couldn’t possibly find without it. Gold put his influence down to shoe leather. If he was going to recommend a Szechuan hot pot, he’d damn well eat all the Szechuan hot pots he could stomach to find the best. I travelled to LA for work early last year and ate my way through the city on Gold’s recommendations — that lively mole at Koreatown’s Guelaguetza, Korean hot pot at Park’s BBQ, pizza at trendy Gjelina, an incredible potato taco at Trois Familia. Each place was part of Gold’s Best 101 Restaurants, and had a sticker with his face in profile on it (hardly the old model of the anonymous reviewer). Every place was predictably great.

My last morning there, I trekked downtown to loiter in the lobby of The LA Times and buy a copy fresh off the press for my journalist wife. Maybe, I thought, I’d bump into Gold. I didn’t, but wandered over to Grand Central Market for brunch at Eggslut and maybe a cheeky taco. There, at a smallgoods counter I spotted the ruddy face, long hair and suspenders of Jonathan Gold, discussing the merits of smoked meats with a colleague.

I summoned the courage to cut into his conversation and introduced myself as Emily’s friend. The other guy from Ingredipedia. The food podcast. From Melbourne. He nodded. He knew it. He remembered.

Gold wished me well, shook my hand and went back to buying smoked meats. I wandered back onto the street, a little shaky, like how I imagine young people feel after they meet Justin Bieber. For a second I had touched the heartbeat of the city. 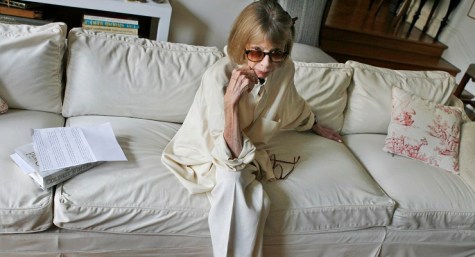 Vale Joan Didion, one of the 20th century’s greatest writers

TISM have a very accurate summary of celebrity chefs in the song BFW- Big Fuckin Whoopee.
It still holds true.

TISM, BFW-
“Chefs, especially celebrity chefs, but all chefs really. Good ones, I mean, the ones with the snooty attitude who think what this world really needs is another braised quat quat in a rococo of couscous. And people who like all that shit like John Hindle11 and Claude Forrell12 and all those food critics

By Christ, when your life’s speciality is forcing another morsel of over-glazed lamb shank down your oily, globular, over-opinionated gullet, when, of all the things in the world men are called to do. Of all the vocations of love and adventure. Of all the trials of the emotions and amongst all the voyages of spirit mankind can embark upon, when, given this whole universe of possible callings, the one you choose is to sit on your crapulent crack and lazily whine about someone else’s cooking, that’s when you know you are at the very acme of the BFW shit heap”

Just in case you could not be bothered to look, they cook dinner, so do I… get over it.

Crikey has an “editorial consultant“? Seriously?
Has it now reached peak wank? An encomium for a food writer who ate himself to death?

C’mon, editorial consultant (and food blogger) – you surely know the difference between a ‘palette’ and a ‘palate’?? (Otherwise – great piece.)