Seventy years on, the reason for Nature Boy's popularity is no mystery. But the story of its origin, inspired by early hippy movements, is a little stranger.

You know there was a boy, a very strange enchanted boy, and they say he wandered very far over land and sea, and yes, this week’s fortuitous anniversary is of “Nature Boy“, the Nat King Cole signature tune, which hit the charts seventy years ago, and became a huge phenomenon. You don’t know it?

Ah that’s the problem isn’t it. The cultures we shared — mid-century mass culture which dictated what everyone was watching, listening to – is dissolving, leaving no memory. But “Nature Boy” was a sensation, a simple spiritual lyric, with a weird folkish-lounge jazz lilt amid the era’s heavily polished pop. It hung around for decades thereafter, as a standard of the ethereal, a hint of otherworldiness, and as one of Cole’s two signature tunes (the other, um, escapes me).

By the 1960s many thought that Cole had written the song, seeing it as a hymn of “acceptable blackness”, a natural expression of his innocent persona. But at the time the song hit — it was number one for eight weeks — its composer was briefly as famous as Cole. Eden ahbez (pronounced “ahbe“) had long page-boy curls, a robin hood beard, and wore a rough sweater throughout the many interviews he did, often riding into a TV set on his bike. 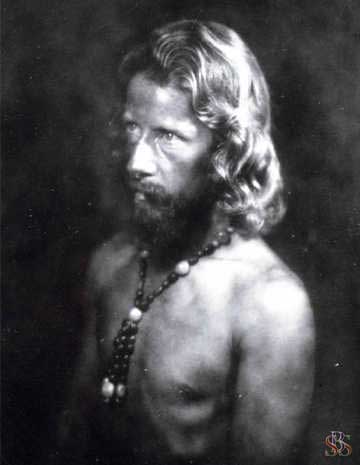 Standard hipster stuff now, but this was 1948. Yet ahbez (he insisted on having his name spelled lower-case) was accepted as a bohemian, the story of how he had got the song to Cole — he’d left the sheet music, unsigned, with the porter at a stage-door of a theatre Cole was singing at — becoming as famous as the song itself. It was months before Cole could record it, because ahbez had to be found. When he was, he was with his family, living behind the first L of the Hollywood sign. For a while ahbez claimed it was the first song he’d ever written. It wasn’t, but it only added to his myth.

“Nature Boy” introduced to the world what was not yet known as the “hippie ethos”, but it was nothing new to Californians. For two decades, a floating group called the “Nature Boys” had been living in the canyons behind Los Angeles, which the city had not yet sprawled into. They were pre-beatniks, proto-proto-hippies, who had dropped out of society.

Long before ahbez hit the canyons — he’d had several names since leaving New York as a fostered orphan in the 1920s, and working as a pro-musician and small band leader in the ’30s — a whole community had sprung up, living in caves, building small huts, gathering wild dates, tangerines, avocados and nuts. The movement had developed from a few German immigrants, who’d been part of the naturmensch movement of the 1890s onward: young men and a few women, who had been horrified at Germany’s rapid industrialization, and had taken to the forests and mountains in long wanderings, sleeping, growing their hair out, Jesus-like.

The link to California was William Pester, who had emigrated in 1906, one of the several candidates for being the subject of the song. Pester settled near Palm Springs, at the time no more than an old “Indian” trading post. He acquired a following, and then celebrity, with film stars like Rudolph Valentino and western pulp novelist Zane Gray coming up to visit. By the ’20s and ’30s the Nature Boys had become a weekend attraction, and many got on the road to escape the attention. One or two had been disciples of Gurdjieff, the Armenian mystic settled in Paris. When the Indian “anti-guru” Krishnamurti became a sensation in the ’20s and ’30s, the Nature Boys gained an extra boost.

The one who would become most famous — another candidate to be the song’s subject — was “Gypsy Boots“, a true hippie before the day, who had joined the movement late, and quickly became a celebrity. Boots had moved back to LA, and started a place called the Health Hut, the first modern health-food store/restaurant (following a few cafes, often linked to the theosophical and raw foods movements, dating from the 1910s).

Boots’s true fame came when he landed a regular spot on the Steve Allen show, the nightly talk show that had gone surreal long before David Letterman, with guests jumping into vats of custard, and a whole show done from the studio carpark. Boots, who would swing into the studio on a vine, introduced his audience to raw foods, combined in a modified mixer — he called it a “blender” — with yoghurt, which Gurdjieff had said had mystical properties. Yes, a nature boy invented the smoothie. Ahbez himself had other hits, and recorded a bizarre spoken-sung-trance album called Eden’s Island, which lays claim to being a first of the “exotica” movement.

The Nature Boys squabbled and fell out as fame and the ’60s hit, made up, and died in their 90s, long before it became routine to live that long. Tourism followed them to Palm Springs as their idea of the fruitful desert caught on; the Beats, a fairly urban crew till then, were turned on to their pastoral message. The combination of nature and hip created the hippies, then natural living simply became incorporated into everyday life, with a juice bar on every city corner. Pester’s hut was located at what is now Coachella, location of the most annoying music festival in the repertoire.

Who the song was really about remains a mystery. As does its authorship. Ahbez settled a plagiarism suit from a Yiddish folk musician for the tune, and his early versions of the tight, elegant lyric had circulated as a verbose, rambling poem. Some say a woman helped make it the lyric of the year, and the decade; some say it was LA avant-garde film-maker Maya Deran.

But no one owns it now; it drifted into the world. As its particular fame has been forgotten, its spirit has become general. Cultures are just cults whose practices everyone takes up. “Nature boy’s” haunting final verse was the first warm breeze of the summer of love, twenty years on, its wild success ultimately down to the fact that, amid the cocktail-clinking sophistication of its era, it had the simple virtue of being true: “The greatest gift you’ll ever earn is just to love, and to be loved, in return”.

Doubling down on double negatives, the other song wasn’t not unforgettable.

What was that one about “..lazy, hazy days of soda & pretzels & beer”?

I think GR gave it away with this ” Cole’s two signature tunes (the other, um, escapes me)”, which can only mean “Unforgettable”, as noted above.

Wonderful piece from Grundle, after a not unentirely ugly & tedious week of grinding news.
Thank you, it must be why you are paid the big bucks.
The evocative words and lilting melody coincided with my first stirrings of adolescence, for which I am forever grateful.
I wish that I had a copy of Eden’s Island so I could not listen to it without thinking not only of the Sand of Eternal Afternoon TV falling away particle by precious particle and paying for it with my data allocation.

And the singing in this version is pretty swede too.
https://www.youtube.com/watch?v=jDsjZXrYIZk

Ta, DF – I was being a bit arch about Eden island. It’s like having an extra fast speed on ones gramophone player (!) for records you don’t like, gets them over faster.

Thanks, Guy, the background is fascinating: hippies, blenders, the Hollywood sign, plagiarism suit, Pester’s hut replaced by Coachella, it’s got it all. When will the movie be released?

It’s the favourite song in my collection of Nat’s classics, it never dates.