Greg "Greggo" Thomson has stepped down from his posts on Sky News and Fox Sport after a recent MC gig at a charity event turned sour.

Greggo leggos of his job, the ABC has a cringey new corporate video, The Sun cuts its losses after a bad bet, and other media tidbits of the day.

Greggo’s gone. Sky News and Fox Sports presenter Greg Thomson has resigned, just days after an embarrassing MC gig video was published. In the video Thomson yelled and swore at Inala charity fundraiser guests, and tried to get them to “skol a drink with Greggo”. He doubled down after the video went public and he was suspended from work, telling Fairfax he had nothing to apologise for.

Yesterday, though, he tweeted an apology, and said he was resigning: “I sincerely apologise to Inala, the organisers, sponsors and those attending last week’s fundraiser. I deeply regret taking some of the shine off Inala’s great work”. 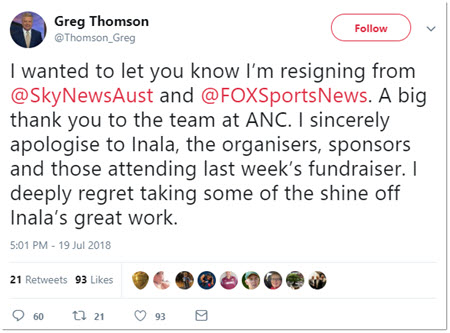 Happy as Larry. There’s no paleo banana bread, but the ABC’s latest corporate video is almost as cringe-worthy as last year’s Finance Department recruitment video. Produced to illustrate the ABC’s new principles, it features an intern named Larry (“Be as happy as Larry with the ABC principles”) learning how they work. For the principle of being accountable, Chas Licciardello owns up to farting in the lift. Jimmy Giggle, Richard Fidler and Kumi Taguchi also make cameos. 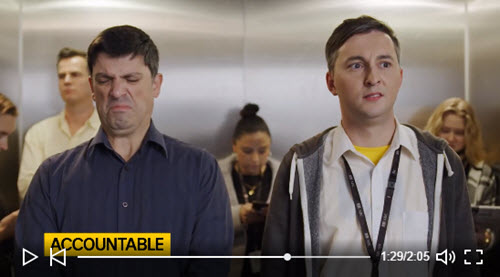 The new five principles were sent out to staff last month, and are:

Managing director Michelle Guthrie told staff in an email that the principles had been “road-tested” as leadership principles, and managers would have to take a one-day workshop to go through them.

“The ABC Principles set clear expectations about how we want everyone to work together; across teams, as leaders, and as individuals,” she said. “We plan to build them into everything we do. From the way we recruit to how we manage, recognise, and reward each other.”

The Sun no longer shines. News Corp UK tabloid The Sun may still be Britain’s biggest-selling newspaper, but its power to create a business off the back of its popularity (which is fading) has been shown to be questionable. News Corp and Tabcorp have thrown in the towel on the Sun Bets gambling website after losses of well over $200 million in two years.

In a quiet announcement to the ASX on Thursday evening Tabcorp signalled that its 2017-18 financial results next month would contain the bad financial news about the Sun Bets adventure.

Tabcorp has been particularly burned in the failure. It and News UK had operated the Sun Bets joint venture since 2016, and it has been in out and out financial disaster, losing tens of millions of dollars and costing Tabcorp more than $150 million in write-offs and losses between 2016 2018. — Glenn Dyer

Glenn Dyer’s TV Ratings. More rubbish from Seven — the second episode of The Single Wives got 533,000 viewers, down from 571,000 on Wednesday night. The metro audience fell 18,000 to 357,000 and the regional audience fell 20,000 to 176,000. The program that followed at 8.45pm, Flights From Hell, averaged 308,000 nationally. No wonder Seven dropped into third place in the main channels, behind Nine and Ten. Such was the weakness of Seven’s effort from 7.30pm, all they had to do was turn up. Ten’s MasterChef stood out as an exemplar of good taste with 1.15 million viewers. Read the rest on the Crikey website

How is “We are ABC” a principle?

Indeed. All the principles are a bit lame really, my child’s primary school has better ones. Surely they have the creative capital to come up with a more inspired list.