Yet again, industry super funds have dominated the ranks of the best superannuation performers. What on earth are the big banks doing?

The results are in from the 2017-18 financial year for superannuation funds and — like previous years — they’re an embarrassment for the retail superannuation sector, the Liberals, and the Business Council of Australia.

According to results compiled by Superratings, industry super funds occupy the top ten places in performance over 2017-18 and nearly all of the top 20: 11th spot was taken by corporate fund Mercy Super; Qantas’s corporate fund was 15th (corporate funds are funds run by companies for their own staff, and not usually open to the public). The best retail fund, IOOF (which is no longer bank-owned) Employer Super Core, had a return of 9.59% growth, nearly a full percentage point below the tenth-placed industry fund. Retail funds make up just 15 of the top 50 funds.

The Superratings data extends out over 20 years; most of the 2017-18 top 10 have also performed strongly on a five, 10 and 20 year basis, with the best fund, Hostplus, occupying the top slot on a one year, three year, five year, seven year and 15 year basis. Only one retail fund made it into the top 20 on a ten year basis and four made the top 20 on a 20-year basis.

Tellingly, the Commonwealth Bank’s corporate fund also performed better than the retail product the CBA offers via Colonial First State (which is now to be spun off). Its corporate fund underperformed the top 20 — where the lowest performance was 9.8% — by achieving just 6.53%, but its best CFS fund was even worse at 6.29%. One a ten-year basis (remember, that takes into account the financial crisis), its corporate fund was 19th on 6.58%, while the same CFS fund managed only 5.1%. The Commonwealth Bank doesn’t perform too well for its own staff, but it performs much better for them than for its retail customers.

Separate analysis by Chant West has similar results. It has the same top ten but for the inclusion of South Australia-based industry fund State Wide; its ten-year top ten is a little different but the only non-industry funds are the Queensland government QSuper fund and one of Telstra’s corporate funds. 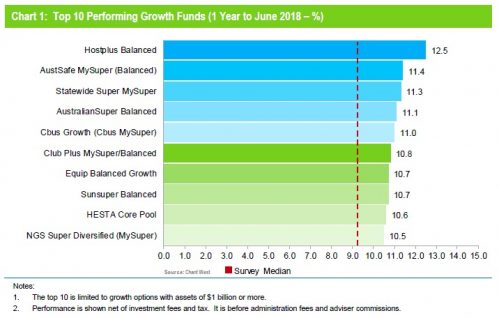 Chant West provides a direct comparison of industry and retail funds and shows that retail funds were not as uncompetitive as usual in 2017-18 — the performance gap was 0.7 percentage points over the year.

But on a longer term basis the comparison is increasingly embarrassing for the banking sector. This reflects not merely the higher fees that retail funds charge, and the expensive related-party transactions that happen in that sector, but the fact that industry funds are more willing to invest in unlisted assets like infrastructure and private equity and are more agile in responding to market opportunities like mispricing.

These results again discredit the campaign run by Kelly O’Dwyer and her Liberal predecessors who, while putting their own money in industry funds, demonise them on behalf of the retail fund sector. O’Dwyer couldn’t even bring herself to admit industry funds perform better than retail funds after the Productivity Commission reached that conclusion. They also further discredit the campaign run by the Business Council’s Andrew Bragg, and hosted by the Business Council’s website, to demonise industry funds as treasuries for trade unions.

But they raise further questions. Industry funds’ performance isn’t just better because they have lower fees and fewer dodgy related party transactions. As Chant West’s Mano Mohankumar notes, they manage their funds better. But why is it that Australia’s banking oligopoly are such poor managers compared to the employer representatives and trade union representatives who oversee industry funds? Why are the latter more encouraging of agility and the pursuit of better returns in their fund managers than the banks? Isn’t that supposedly what the banks are best at? The Commonwealth Bank can’t even get its own corporate fund, for its own staff, to perform as well as industry super funds.

Maybe once the banks have spun off their retail fund arms, the latter might start to improve their performance, unencumbered by what looks like the dead hand of the banking oligopoly. Maybe they might even ask industry super for some tips.

Disclosure: the author is a member of Hostplus

Are you with an industry fund or a super fund and how did you make your decision? Write to us at [email protected].

I remember over at the Guardian comments section one of the paid right wing spivs was warning all we lefties that the RC into the Banks would uncover huge amounts corrupt Union practices which would finally finish Shorten off.
Kind of didn’t happen did it.

Its often hard to tell which spivs are using which nom de plumes. I believe Jedi Master is now going under the Moniker of HappyLittleDebunkera…..though don’t quote me on that. Heck, for all we know, all of the RWNJ Spiv Accounts on The Guardian may well just be all one person. Surely Abbott’s $4.3m troll fund couldn’t stretch to cover so many people?

No it was Timmy

Ah, good ol’ Tim-tam man of Altona. The bloke who admitted in a foreign publication to have worked in the office of Peta Credlin.

Oh this is just too too funny now. These moronic impostors, these puffed-up pretenders…they can’t even win at their own game, on their own loaded playing fields. Too, too, too funny. Captive bolt time, neoliberalism. You’re rooted. Totes f*cked in the head.

Off to the knackers for you, my old lovely.

I notice that the Australian reports this accurately enough front page (albeit referring mysteriously to “so-called” industry funds) but none of their usual suspects seem up to making a comment. Meanwhile, the Business Review section leads with “Hayne to probe industry super funds over union sponsorships”. If the industry funds can outperform the private sector and at the same time prop up the union movement (as the LNP hysterics seem to think), wtf ARE those banks and others doing?

Lining their own pockets?

Lining their own pockets?! Gosh! Someone please send those Australian scribes a tip-off.

“Sponsoring this government in return for protection and beneficial legislation”?

That will just spur the ‘financial industry’ on to try harder to nobble these funds because (a) they don’t own them and (b) they show them up. The most common theory I hear is that the reporting is fudged to look better than it is and the boards of these funds are stacked with union officials who use them as a slush fund and siphon off hard earned funds to finance the unions in their nefarious activities. Unfortunately every union official who gets caught doing something ‘naughty’ adds weight to the conspiracies.

…..and how many actually have? 99% of the cases I have seen have been summarily dismissed by courts due to lack of any evidence.
Meanwhile, the banks are up to their ears in dodgy dealings, yet we’re meant to believe that they’ll do what is right when it comes to Super? Just be thankful the Librorts Party never got their FIFA legislation passed, then I assure you the Retail Funds would be performing even more poorly.

But there is a union at the bottom of this pile of corruption. The Federated Banker Spivs of Oz?
The difference between this one and the “feral” ones is this one is one of those “good (LNP donating) unions”.