Channel Seven's Sunrise has been caught out running excerpts of interviews belonging to Four Corners.

Sunrise caught broadcasting Four Corners content, the ACTU bars journalists from Shorten speech, Fairfax and News Corp work something out, and other media tidbits of the day.

Sunrise rips off Four Corners interviews. Seven has apologised for running excerpts from Four Corners’ interviews with divers involved in the Thai cave rescue without attribution.

The tweet of Sunrise’s report was deleted shortly after the journalist who reported the story, Mark Willacy, pointed out the “theft” on Twitter yesterday. Sunrise executive producer, Michael Pell, has been apologising repeatedly on Twitter this morning, saying it was an error and the ABC’s watermark was covered by a “busy screen of supers“. Host Edwina Bartholomew also apologised, more graciously, on Twitter this morning. 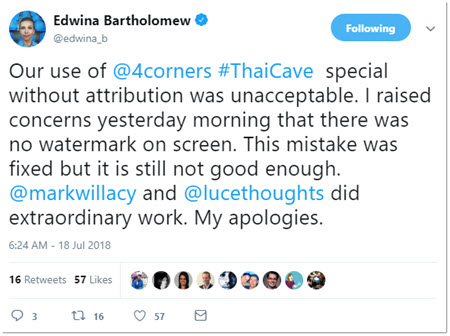 Pell referred to the mistake being corrected on-air, which appears to us as simply adding an on-screen credit when the story ran later in the program yesterday, without an apology.

ACTU excludes journalists. Journalists covering the ACTU Congress in Brisbane were excluded from the dinner last night, at which Opposition leader Bill Shorten spoke. Industrial relations reporters, some of whom had travelled from interstate, were planning on reporting the speech. 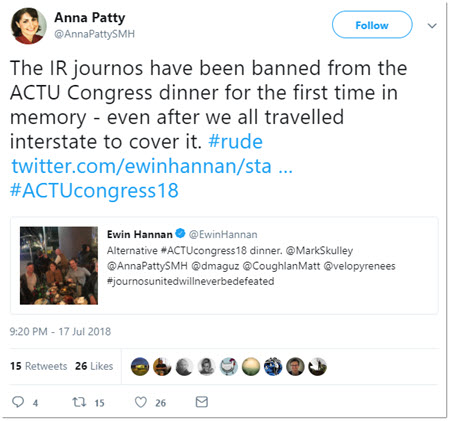 The union representing journalists, the MEAA, has lodged a complaint with the ACTU, and said in a statement that journalists had restricted access to other congress events. MEAA Media section president Marcus Strom said it was the first time anyone could recall journalists being excluded from the dinner.

It is particularly absurd as journalists are being locked out while attendees are inside live-tweeting and posting to social media. The ACTU is an important organisation. A speech to the ACTU delivered by the alternative prime minister is an important event. The exclusion of journalists trying to do their job should not have happened and it shouldn’t happen ever again.

An ACTU spokesman told Crikey the dinner was “a private ticketed event for delegates and was not open to the media”.

Fairfax and News Corp’s printing deal. Fairfax Media and News Corp Australia are set to merge their printing operations to cut costs. In an announcement to the ASX, Fairfax made the deal public this morning.

Both companies came close to a similar deal when Fairfax rationalised its printing operations in Sydney and Melbourne in 2014, closing the Chullora and Tullamarine plants. It was brutal cost-cutting that saw 1900 staff sacked, including printers, journalists and others. Fairfax and News talked about combining plants, especially in Sydney where the News plant was just down the road at Chullora, but nothing came of it. The two companies have been collaborating with shared trucking and printing in Queensland.

In Wednesday’s statement, Fairfax CEO Greg Hywood said the new arrangements would make the production of newspapers “more efficient for both publishers”, with Fairfax to see a full-year benefit of about $15 million from the end this calendar year. News Corp will provide printing services for Fairfax across NSW and Queensland, while Fairfax will print News Corp publications from its NSW-based North Richmond plant. — Glenn Dyer

Vale Evan Whitton. Legendary journalist Evan Whitton has died, aged 90. He’s been remembered among other journalists as trailblazing, for his investigative reporting and essay-writing. He was entered into the Australian Media Hall of Fame in 2011. The Australian’s obituary remembers some of his key pieces of work:

His prodigious output and extraordinary network of contacts in the political and criminal underworld made him a must-read. He covered the Petrov affair, the HMAS Voyager disaster and the Fitzgerald inquiry into police ­corruption in Queensland. He also reported on the Street royal commission in NSW, also known as the Wran royal commission, which won him the 1983 Melbourne Press Club’s Graham Perkin Award.

The revolving door. SBS managing director Michael Ebeid has announced his retirement from the broadcaster, after seven years in the role. He’ll finish up in October, and the board has started its recruitment process for his replacement. The change comes at a difficult time for the broadcaster, as it is subject to content and a competitive neutrality review, along with the ABC. 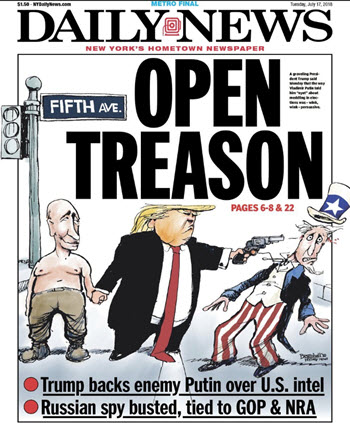 Glenn Dyer’s TV Ratings. Nine’s night in total people and the demos as Seven ran up a white flag and brought us a boring retrospective of Home and Away’s 30 years (it was made by Seven’s Sunday Night program, so no critical facilities used in this one). Ninja Warrior on Nine grabbed 1.16 million viewers (down from 1.19 million a week earlier). Endless Summer: 30 years of Home and Away on Seven, 967,000, less than the actual ep of Home and Away which had 1.08 million national viewers. MasterChef averaged 1.07 million nationally. Read the rest on the Crikey website.

Vale Evan Whitton indeed, his like are all but gone from what passes for journalism these days.
He almost convinced me to adopt his idée fixe of ditching the British adversarial judicial system for the Napoleonic inquisitorial but fortunately I recovered.

True AR, Evan Whitton was one of the best, and I haven’t been convinced that he was wrong about the French judicial system, which is surely superior to ours.

The Four Corners program was gripping TV produced in what must have been a very short time. Explained the logistics, the detail of how it happened and the human elements. That’s my ABC.

“Industrial relations reporters” and “journalists” were excluded from the ACTU Congress? So they let “the Grace Colliers” of Limited News in?