As Georgina Downer fights for the seat her father held for over two decades, she appears to be dodging a rather big question.

With just 11 days to go before the Super Saturday byelections, Georgina Downer’s campaign to win back the “ancestral seat” of Mayo is floundering.

Reinforcing a local narrative that she’s inaccessible and avoids any engagement that isn’t carefully scripted, Downer chose to skip a candidates forum held by the local climate action group in Aldgate last night.

As a media savvy “Research Fellow” at the quite-a-bit-right-of-centre Institute of Public Affairs, Downer has railed against minimum wage and penalty rates and referred to efforts to secure a safe climate as “the global fatwa on carbon”.

Last year the think tank published a compendium of pseudo-scientific musings entitled Climate Change: The Facts 2017. Clever wags on twitter have suggested that the IPA has a colon problem — a more fitting title would have been “Climate: Change the Facts 2017”.

Many justifiably assume that Downer is therefore a climate denier, however in her first media appearance after preselection, she wanted it to be known that her employer’s opinions were not necessarily her personal opinions.

I was having trouble squaring this with veteran ABC broadcaster Jon Faine’s character assessment “She’s not one of those politicians who trots out a line for the public whilst saying something different when sitting down to lunch. What you see is what you get”, so I went to the source:

No answer. I prompted again: I repeated my question on Twitter daily for a fortnight. I emailed, messaged her on LinkedIn and Facebook Messenger. Never an answer. During this time, Downer posting nothing on Twitter, but left “digital fingerprints” in the form of “likes”.

On 25 May Downer deleted her Twitter account, choosing to permanently remove years of her opinions from the public domain. Downer’s online public persona was gone in an instant, and with it, a major opportunity to interact with the public. I left some messages on her Facebook wall, polite-ish, but frustration starting to show.

I soon discovered that Downer’s team had hidden my posts. (Zuckerbergian censorship is insidious — page administrators can hide your messages from the public, but you and your friends are none the wiser.)

Over the course of a week, more than 100 people followed suit in their own way. At first the messages were simply hidden, but soon Downer’s team began deleting them — often within seconds of posting.

Anyone asking the simplest question mentioning climate science was quickly blocked from posting on her Facebook page.

Downer’s refusal to answer took on a life of its own. My questions — or question, since there was only ever one — received more than 14,000 likes and retweets and was seen more than 700,000 times. The local paper, the ABC and the Sydney Morning Herald all noticed Downer’s conspicuous silence and unusual social media practices.

Downer’s “unfair advantage” is access, and she uses it shamelessly.

On one of Turnbull’s three visits during her campaign she extracted a $10m pledge for an indoor aquatic centre. She’s hosted a $5000 a head fundraiser with Julie Bishop, and enjoyed support on the hustings from McCormack, Frydenberg, Cormann and at least six other ministers.

Yet so far, it seems that having friends in high places is not as important to the people of Mayo as being accessible, unscripted and fair dinkum.

Simon Holmes à Court is a senior advisor at the Climate and Energy College at Melbourne University and can be found on twitter at @simonahac.

What do you make of Georgina Downer’s chronic avoidance? Let us know at boss@crikey.com.au. 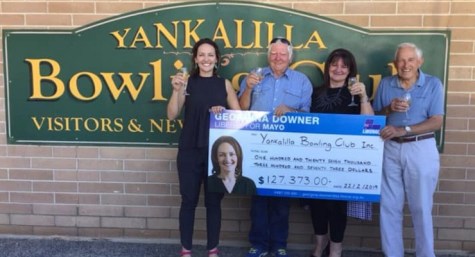 The rort that got away: it started with a Downer 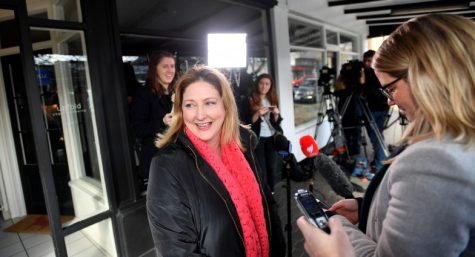 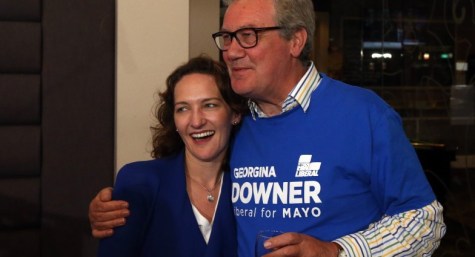 Alexander Downer and the Liberal leadership that wasn’t

Downers performance in this seat will be a measure of Turnbull’s leadership. Surely if she fails to reinstate herself and the Liberal party in her ancestral Estate, then Turnbull will be under pressure.
Sounds just as silly as when the MSM say the same regarding Shorten.

Actually, a “global fatwa against carbon” is a pretty good summary of what we ought to be doing. Since Ms Downer has given us such a clear picture of the devil that she doesn’t believe in, I wonder if she is preparing for a religious conversion?

looks like georgie girl is a real downer, born to rule mentality, treat the serfs the way it is intended, mushroom politics, keep them in the dark and feed them on bullshit, works every time with the lesser mortals, they know their place, right under the trickle downers boot heel, serve the suckers right.

Good piece from Holmes a Court. The sticky fingers of the IPA all over Georgina. Hope the good folk of Mayo don’t get ensnared.

Just another hack from the IPA who pre-selectors have chosen to take a long march through the institution of the Liberal Party.