No one wants to skol a drink with Greggo, Melbourne turns up for the ABC, Dasher’s new gig with Roxy Jacenko, plus other media tidbits from the day.

Skol with Greggo. Sky News and Fox Sports presenter Greg Thomson has been suspended over an MC-ing gig on the weekend where he swore at the audience and yelled at them as he was booed before the microphone was taken off him. In a video published by Sydney radio station 2GB, Thomson can be heard berating the audience for talking, while they boo and called out for the microphone to be cut off. One woman can be heard responding to “who wants to skol a drink with Greggo” by calling out “no one”.

The Australian reports the event was a charity lunch held on Friday for disability support group Inala in Sydney, and that Thomson was not paid to MC the event. A Sky News spokeswoman said: “Greg Thomson was taken off air and suspended immediately pending an investigation.”

Save our ABC. A packed-out rally in Melbourne Town Hall yesterday capped off a series of rallies across the country in support of the ABC. There was a queue for blocks to get into the building. 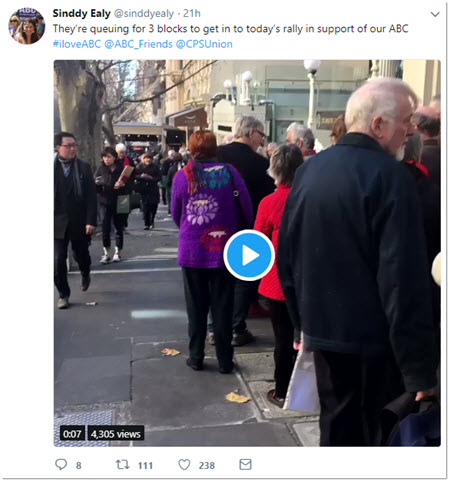 Peter Greste, Magda Szubanski and Professor Fiona Stanley addressed the crowd, which also passed a resolution demanding that, among other things, all politicians commit not to sell or privatise the ABC.

Dasher and Roxy’s new gig? Disgraced Senator Sam Dastyari could be headed to the small screen with PR queen and socialite Roxy Jacenko. The Australian Financial Review’s Rear Window column today reports rumours that the pair — who’ve each faced their own share of scandals — are hosting a Channel 10 pilot program that will discuss the scandals of the week.

Donna Hay and News Corp split. Food writer and magazine maven Donna Hay last week celebrated the 100th issue of Donna Hay magazine, which was the last from News Corp Australia. According to Sydney’s Sun Herald, it was after a rather nasty split between Hay and News in April of this year:

The event was dubbed a ‘celebration of the 100th issue of Donna Hay Magazine’, but some said ‘Donna Hay’s News Corp farewell’ might have been a better description … Hay hopes to produce another magazine but said she would no longer be working with News Corp, which also means an end to her weekly recipe page in The Sunday Telegraph’s Stellar magazine.

Predictably, no mention of the falling out in yesterday’s Sunday Telegraph, published by News Corp Australia. Instead, Hay was quoted simply saying, “One hundred issues seems like the perfect time for (me) to stop.” — Glenn Dyer

Exclusive watch. The Sunday Telegraph yesterday splashed with its “world exclusive”: an interview with one of the Australian cave divers to help with the Thailand cave rescue last week. The ABC then, last night, was very careful in introducing its packaged-up promo story for tonight’s special Four Corners look at the rescue. An interview with the very same man, Craig Challen, was announced as a television exclusive.

The revolving door. Ben Naparstek has been appointed Audible Originals director of original content, replacing Jesse Cox, who died late last year. Naparstek was most recently head of digital at Edelman PR — a title he’d also held at SBS after time as editor of Good Weekend and The Monthly.

Fairfax at the zoo. Fairfax Media and Sydney’s Taronga Zoo have announced a three-year partnership that will include editorial support for Taronga and Western Plains Zoo. Taronga will grant Fairfax exclusive or first access to conservation news stories, including coverage by environment editor Peter Hannam. The three-year partnership will also include greater commercial and marketing support between the organisations.

Glenn Dyer’s TV Ratings. Last week, though Nine had the third State of Origin Game and the first three eps of the new season of Australian Ninja Warrior, Seven won out, because Nine’s programs on Sunday through Wednesday failed to deliver. Last night it was a repeat — Seven won total people, Nine won the main channels (narrowly), and to provide an extra surprise, Ten ended up fourth in the main channels behind the ABC. Ninja Warrior managed 1.33 million viewers nationally — up 11,000 on the return a week ago. House Rules on Seven grabbed 1.40 million, up 65,000 from last Sunday. The first half of the World Cup Final averaged 583,000 (until 2am when the ratings stopped for last night). Read the rest on the Crikey website.

Ah, the Sky News maggots at it again.