Australian Basketballers' Association has responded to a defamatory article published by the ABC regarding a mid-game brawl in the Philippines.

The Australian Basketball Association get delayed right of reply on “highly defamatory” racist taunt claims, journalists trapped in Syria, plus other media tidbits from the day.

ABC sorry for basketbrawl story. The ABC has apologised for publishing a story about last week’s basketball brawl in the Philippines that repeated accusations the Australian team had taunted the Filipino team with racist slurs. The online story (now updated), reported on comments made by photojournalist Winston Baltasar on ABC radio on Saturday that the brawl — which both teams have now apologised for — followed racist taunts by the Aussies, including calling Philippines players “monkeys”. 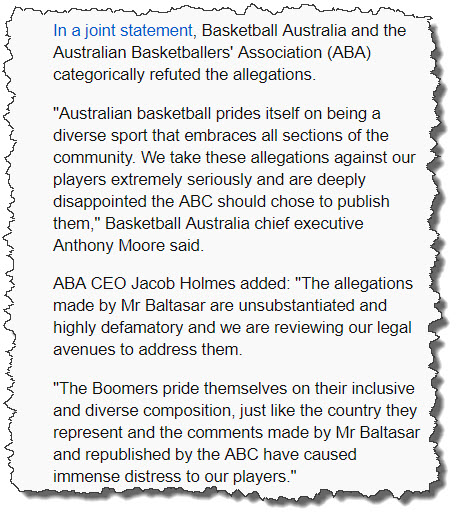 In a statement to Crikey, an ABC spokeswoman said Basketball Australia was offered an interview on Grandstand to talk about the allegations — already being spread on social media — which it declined. But after the interview went to air, the story was written up based on Baltasar’s comments without going back to either Basketball Australia or the Australian Basketballers’ Association — an oversight for which Crikey understands the ABC offered an informal apology to the organisations.

The ABC concedes that the specific allegation should have been put to BA at this point. When the Australian Basketballers’ Association and Basketball Australia issued their joint statement July 8, the online story was updated to include the substance of their response and a statement (‘back announce’) was added to The Ticket. The ABC stands by its decision to report this allegation.

The revolving door. Just a few short months after Ita Buttrose’s sudden departure from Studio 10, she’s headed over to her former competitors on Nine. While Today Extra host Sonia Kruger is off-air next week, Buttrose will fill in as co-host, alongside regular presenter David Campbell. On the show yesterday, Kruger said her overseas trip was “top-secret”.

Journalists trapped in Syria. Dozens of journalists are trapped in southwestern Syria, between advancing Syrian forces and the Israel and Jordan borders, the Committee to Protect Journalists says. CPJ has confirmed 70 journalists are in the region, but the independent Syrian Journalists Association says it could be as many as 270. One reporter told CPJ that journalists trying to flee the area were being arrested by Syrian forces. Syria is one of the most dangerous countries in the world for journalists, with 120 killed since the civil war began in 2011. 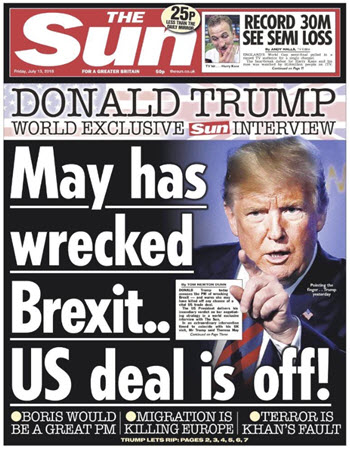 Glenn Dyer’s TV Ratings. Seven’s night for the first time this week as the AFL game between Adelaide and Geelong meant big audiences across southern AFL states. The game drew nearly a million viewers — 738,000 on Seven and 248,000 on Foxtel. MasterChef did better on Ten with 1 million nationally, but the AFL went on for much longer, as it always does (wake me up when it’s over, puhleese?). Read the rest on the Crikey website.

Re the basketball shenanigans, Philippine players have refuted the suggestion that racist taunts were used by the Australians or indeed the Philippine players. So what of the report from Baltasar which would appear now to have been nought but trolling?
Are there any consequences?