Daraa, the birthplace of the Syrian uprising, has been surrendered to government forces. The bloodshed is far from over, but this is a notable sign the tide is slowly turning.

The surrender of Daraa by Syrian rebels to Syrian government forces marks the beginning of the end of the Syrian civil war. Although the rebel forces remain concentrated in the north and east of the country, the Assad regime will now be able to concentrate its forces and those of its allies to defeat remaining strongholds one at a time.

Daraa is symbolic as the birthplace of the anti-Assad rebellion in 2011, following the Arab Spring uprisings elsewhere across North Africa and parts of the Middle East. Despite being largely cut off from major supply routes in the east, the Daraa rebels have held out against the government for seven years.

Air support and equipment from Russian, Iranian and Hezbollah reinforcements have now tipped the balance of the war in favour of the government, which is slowly clawing back territory. It’s a remarkable turnaround for a regime that, at one point, appeared to be on the verge of collapse. 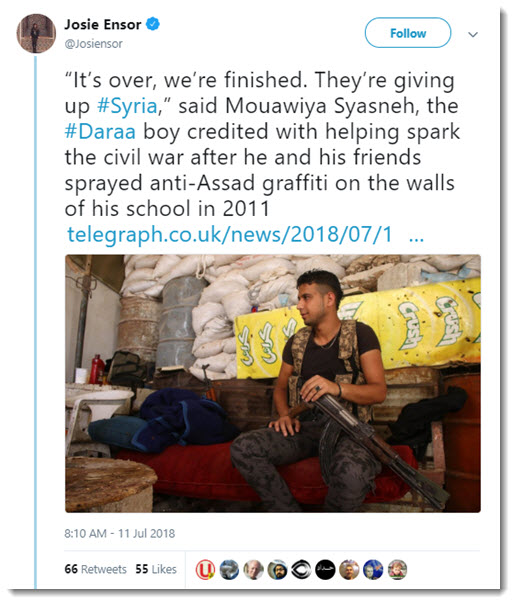 On the rebel side, deep divisions meant that meaningful cooperation, much less coordination, was often impossible. The main splits occurred when what began as a broad anti-Assad regime rebellion divided between “secularists” (or those wanting a revised civil state) and Islamists (wanting an Islamic state). The Islamists, who appeared relatively early on in the rebellion, quickly identified with Al-Qaeda, with conflicts soon breaking out between them, the Al-Nusra Front, and the Free Syrian Army (FSA) rebels.

The Islamist groups were themselves not cohesive, and when the then Islamic State in Iraq crossed into Syria to fill a strategic vacuum in the east of the country (and thus becoming Islamic State in Iraq and Syria, or ISIS), many flocked to its banner. Al-Nusra and ISIS initially cooperated, but a split between ISIS from Al-Qaeda’s waning authority, and its own brand of spectacular barbarism, pitted the two Islamic groups against each other, as well as against FSA.

The FSA itself was riven by factionalism, being less a coherent organisation and more an umbrella for a variety of local commands. Notable among those has been the Kurdish YPG in the north, which had its own agenda of establishing the independent state of Rojava.

With different countries now backing competing rebel groups, and the Assad regime backed by Russia and Iran, the Syrian civil war became a contest of which external backer could bring the most force to bear. With the US wary about a major new commitment in the Middle East following the debacle that was the Iraq intervention, the anti-Assad forces were not only split and devoting as much attention to attacking each other as the Syrian Army, but lacked a committed major external supporter.

FSA and Al-Nusra (known as Jabhat Fateh al-Sham from 2016) still hold significant area of the north and east of Syria and it will be some time — perhaps years yet — before the war is concluded. Given its massive costs in terms of lives — perhaps a half million dead and 13.5 million displaced from a population of 22 million — a hard realist view would be to end the war as soon as possible and reduce further suffering.

However, that does not suit some external strategic interests, particularly those who do not wish to see Russia and Iran untied from their military entanglements in Syria. There are also still many Syrians, perhaps still a majority, who are even more loathe to live under the Assad regime now than they were in 2011.

The fall of Daraa is a significant step in a long and bloody war, and is a strong indicator of a slowly turning tide. But Syria’s bloodshed is far from over, and the country will, at best, remain a fractured state for the foreseeable future.

Damien Kingsbury is professor of international politics at Deakin University.

6 thoughts on “Is this the beginning of the end of the Syrian civil war?”