For The Common Good is the name of a campaign set up by Andrew Bragg after the BCA's failure on company tax cuts.

Canavan goes Shorten on (what else) mining, the Business Council caught out on it’s confected outrage over super, and the disturbing list of  parallels between Trump and Turkey’s strongman president.

Mind yer business. You’ll recall the recent contretemps between Industry Super’s Peter Collins and the Business Council after he complained about former Liberal Party functionary and BCA exec Andrew Bragg’s campaign against industry super. The BCA, and former BCA head Tony Shepherd, reacted with fury to Collins’ complaint, claiming Bragg was just running that campaign in his own time and it had nothing to do with the BCA. Shepherd even claimed that Collins’ complaint signalled the decline of Western civilization (no, we are not making that up).

Well, the ABC’s Stephen Long discovered that the BCA’s outrage was just a little, shall we say, confected … because Bragg’s campaign was directly linked to a campaign he is running for BCA, “For The Common Good“. For The Common Good was set up after the BCA’s failure on company tax, with the intention of running social media/data mining operations to persuade people to the BCA’s agenda of lower company taxes and wage cuts. Sadly, the Twitter account has less than 100 followers, and most of those have joined in recent days after the AFR’s Aaron Patrick ran a piece on how sad looking the campaign’s Twitter presence was. Still, at least it’s good for hosting Bragg’s software for his anti-industry super campaign. Well, was good — after Long contacted the BCA, it was removed and the BCA tried to claim it was a “technical error”. OoooooK.

Yes he Canavan. A tipster in Central Queensland sent us through the following missive that had turned up in their post box: Quite apart from finding consistency in Bill Shorten’s position on the Adani mine, as we in the Crikey bunker were never able to, you’ll get no prizes for guessing just who authorised it — given its priorities — none other than Minister for Mining, Matt Canavan.

Stutch is life? Are the Australian and Australia Financial Review competing for more than just readers? Rumour has it that the Oz has apparently poached AFR Editor-in-Chief Michael Stutchbury’s executive assistant. We asked Fairfax about it and a spokesperson gave us a good old fashioned “no comment”.

Talking Turkey. Ain’t nepotism grand? Following his victory in late June’s Turkish election, President Recep Tayyip Erdogan is out-trumping Donald Trump in filling his cabinet with people from his inner circle and family. Chief among the appointments was his son-in-law as the country’s treasurer and finance minister. Berat Albayrak married the president’s daughter in 2004. He was previously appointed energy minster but increasingly roamed beyond his brief to become one of the most senior figures in Mr Erdogan’s government.

Reminiscent of Trump’s son-in-law Jared Kushner who, with Ivanka Trump, has been out making family deals and claiming to represent the government. In Turkey’s case Erdogan has long railed against the central bank lifting interest rates to try and control inflation and support the lira which is now close to all time lows, having fallen almost 4% on Monday after the cabinet was appointed. Of special note for foreign investors and business is the news on Monday that the head of the central bank will no longer serve a mandatory five year term. There is now no term and the appointment is at the whim of the president (not the Council of Ministers).

Up hill and down Dale. Strolling past the Queenscliff newsagents — Queenscliff still has a newsagents! — the other day, we couldn’t help but notice former David Leyonhjelm senior advisor/literary trickster Helen Dale’s estimable toga party novel, volume two, in the bargain box. Ms Tips is actually going to read this eventually, but pro tip: the best image for the cover of a thick novel is not someone being caused pain and distress by something they are reading. Perhaps it’s Libertarianus Oddballus, reading the latest about David Leyonhjelm. Toga! Toga! Toga! 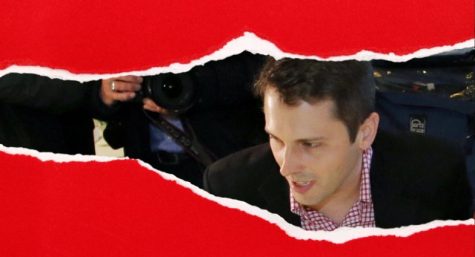 Following on from a previous Canavan claim – that “opposition to Adani is based on racism” (Q&A) – it’s a wonder he hasn’t labelled Shorten a racist to boot? ….. He can join dots, but can he count?

Dale’s tome suggests the delphic utterance that encompasses Graves’ I, Claudius – “let all the poison that lurk in the mud hatch out” and come forth.
Or fifth.