Do we have Australian house prices under control?

The current tumble in house prices has been gently engineered by the government, but for how long?

Australia desperately needs the second outcome. A big house price calamity that caused mortgage defaults and made consumers shut their wallets would send waves of unemployment throughout Australia. A slow fade however — several years of house prices falling slightly or growing below inflation — could be useful. It would clamp down on expectations of eternal house price growth, and stop household debt levels from getting any more absurd.

When you look closely, you see the finger prints of Australia’s policy makers in many places. And that raises the hope that if price falls gets out of hand — tumbling so fast that the entire economy is at risk — they can be attenuated.

The principal of the thing

A major moving piece in the housing market is interest-only loans. Borrowers with these types of loans pay off only the interest, and none of the principal, for a set period, often five years. Interest only loans made up around 40% of the stock of loans by major lenders in 2017. A few years almost half of all new loan approvals were for interest only loans. But not any more.

In 2017 the Australian Prudential Regulation Authority (APRA) has asked banks to strongly limit the rate of interest-only loans and the circumstances in which they are made. Interest only loans now linger below 20% of new loan approvals.

This is one of the major ways in which policy makers have been affecting the housing market. Reducing availability of interest-only loans hit housing investors especially hard, as this next graph shows. 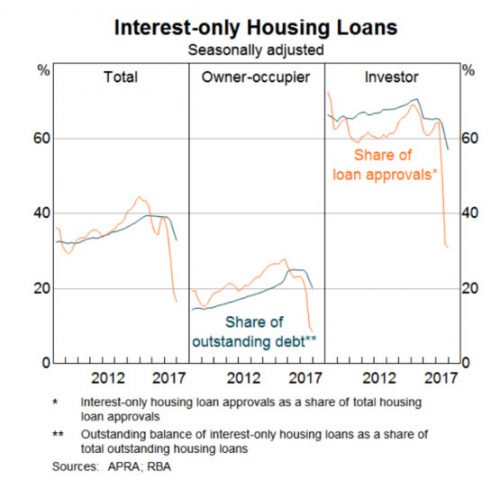 If fewer people can get interest-only loans, that reduces the amount of money chasing housing. That is obviously going to affect prices. But the bigger impact may be the way the interest-only crackdown forces people to sell.

Previously, people could often keep their investment property on interest-only terms for longer than five years. The loan would be initiated with a five-year interest-only period, and that was easy to renew.

But far more often now, when the five-year interest-only period is up, it is up. Instead of paying interest on a 30 year period, the property investor must now pay back principal + interest in the remaining 25 years.

This can inflate regular repayments enormously. For example, on a $550,000 loan at 5% interest, repayments rise from $2302 each month to $3225 when the interest-only period expires.

If the investment property is making a loss already — Australian rental yields are modest and many properties are negatively geared — then the extra repayments have to be funded from the investor’s other assets or income. For some investors, that is impossible and selling the property is the only option.

This potential glut of sales is the “interest-only cliff”. It is a risk factor the RBA has been studying intently. It will be at its peak in 2019, five years after interest-only loans were most popular.

The goal of the interest-only crackdown is to reduce household debt from its record high levels to reduce the risk to the Australian economy. But reducing the debt could also cause a destructive house-price downward spiral. A bit like when a planned burn off causes a bushfire.

But, importantly, the interest-only rules remain under the control of APRA. If a house price crash were set to become economically destabilising, the rules could in theory be changed. Would APRA be quick enough? Could a house price crash rapidly spiral beyond their control? These are both important questions.

But given that interest-only loans are not the only policy tool at the disposal of government — it can also affect interest rates, investor loan caps, measures of loan serviceability and even first home owner grants — we can hope that the government is able to keep house price falls from taking the whole economy down with them.

Do you think Australian policymakers have a handle on house prices? Email us at [email protected].

Why we shouldn’t be afraid of reverse mortgages

“This is not exactly like the US subprime housing market situation”

This is exactly like the US subprime housing market situation because interest only loans ARE sub-prime loans and never should have been offered in the first place.

And yes, a housing price crash would “bring down the economy”…and drastically reduce the cost of living.

Because house prices (and by extension, rents) ARE the cost of living. And yet, in all we hear in debates about cost-of-living pressures is the incessant whining about power prices…

Restricting negative gearing and capital gains tax concessions would add a little to the drop in house prices I think. How much will be interesting.

“When you look closely, you see the finger prints of Australia’s policy makers in many places. And that raises the hope that if price falls gets out of hand — tumbling so fast that the entire economy is at risk — they can be attenuated.”
Bollocks! If anything has gone right in the economy then it’s purely by accident. Morrison is no more capable, other than ranting and producing spittle, than was Hockey.

The US subprime housing market meltdown happened in a time of massive oversupply of dwellings. We have the reverse, a massive undersupply. In this vast country and one of the world’s lowest population density, I still hear people say we’re full and can’t release more land. How stupid are we! The only reason our house prices are so high is the availability of land. Releasing more land (not necessarily in Sydney or Melbourne) to fit demand would stabilise and lower prices, the actual price of building is quite within reason. Recently a housing estate in Sydney was offering 280m2 parcels of land for the ‘affordable’ price of ‘from $899,000’. Government policy is to blame, its time the pollies stopped fiddling and got on with it. Canberra itself is an example of a city rising out of nothing, surely its not beyond current politicians to actually do something constructive in this area.

It is rarely advisable to offer subsidies to boost a goal – far simpler and more incentivating to charge the full cost of living in the vast megapolises of the SE landmass.
In the Interior, beyond the GDR/Sandstone Curtain a 4b/r house with sheds and acres can be had for a couple of hundred thousand.
Rather than pay for poverty in urban horror, the dole could be used to place people when the children can play.
A lot cheaper than the alternative.

Another clear reason for fast speed NBN in the regional areas. A friend of mine near Lismore has converted a shed on his property and has 4 IT experts and 2 secretaries working full-time. He moved from a bank job in Sydney 5 years ago. Another friend, 25 km from Lismore, has to rely on snail pace satellite ‘nbn’ with ludicrous capacity. Amazing how our forefathers could run electricity and phone lines to almost everyone, but somehow a skinny blue cable is beyond our generation. If state and federal govts don’t provide infrastructure and incentives enabling people to move away from congested cities, housing affordability will only get worse!