Outgoing MPs dropped hundreds of thousands of dollars on goodbye mail promoting new candidates in 2016, a Crikey investigation has discovered.

Former MPs who retired at the 2016 federal election spent over $800,000 of public money on voter communication in their final weeks before leaving Parliament — including millions of leaflets and letters promoting replacement candidates.

An investigation for Crikey has looked at the spending of all 23 MPs standing down from front line politics in 2016 including how much each spent from their “communications allowance” before the election. A selection of the leaflets ordered by the retiring MPs was also obtained through Freedom of Information requests.

The analysis reveals huge numbers of leaflets, letters and postal vote applications were ordered in the run-up to the July 2 election including:

In total over 2.2 million leaflets and letters were purchased by retiring MPs during April and May 2016 at a cost to taxpayers of $845,739. Most of the money was spent after the date of the election had already been announced by Malcolm Turnbull — though before the formal election “writs” were submitted to signal the end of the parliamentary term on May 9.

That meant MPs and senators had around six weeks to continue spending public money on election material when the date of the election was already known. Spending seems to have been higher in seats that were under threat from other parties, with Bill Billson — who was recently censured by Parliament for failing to declare outside income before he retired as an MP — the biggest spender of all retiring MPs.

Among Billson’s final correspondence with residents was 135,000 leaflets introducing replacement candidate Chris Crewther at a cost of at least $12,000 (excluding postage). Crewther held the seat for the Liberals by 2557 votes. 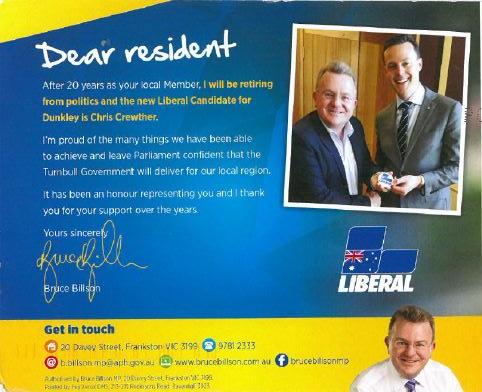 19 of the 23 seats with retiring MPs were held by the incumbent party.

The promotion of replacement candidates wasn’t so successful in Anna Burke’s old seat of Chisholm, however. Despite Burke printing almost a quarter of a million pieces of communication in the final two months on the job, new Labor candidate Stefanie Perri lost the seat by 2154 votes.

Burke’s last-minute spending spree included 66,000 flyers describing Perri as “an amazing woman with a genuine desire to represent the community she lives in”. The invoice for the flyers was dated May 11, 2016 — two days after the dissolution of Parliament and when Burke was no longer even an MP. 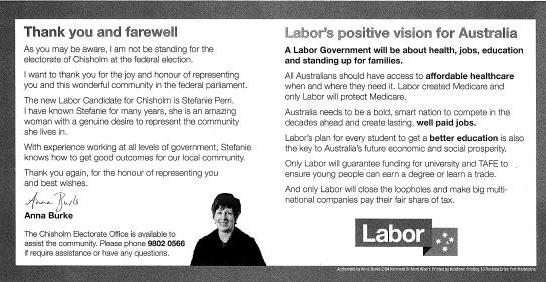 Sharman Stone — who is now the Australian government’s Ambassador for Women and Girls — spent around $23,000 of public funds on a “goodbye” letter to residents, telling them it was time to “pass the baton on” to Liberal candidate Duncan McGauchie. Despite Stone’s endorsement, McGauchie lost the seat to the Nationals.

The spending blitz seems likely to have been permissible under allowance rules at the time, which did not specifically outlaw promotional material for other candidates unless it contained “how to vote” instructions or solicited financial support.

Rules changes brought in by Malcolm Turnbull last year mean that any communications spending must now be for the “dominant purpose” of carrying out parliamentary duties, meaning the 2016 spend-up is unlikely to be allowed at future elections.

Political parties in Australia already receive public funding specifically provided for election costs. A total of $62.8 million was handed out by the Australian Electoral Commission (AEC) following the 2016 federal election, including $23 million to Labor and $24 million to the Liberal Party.

Attempts to contact each of the three former MPs named above went unanswered. 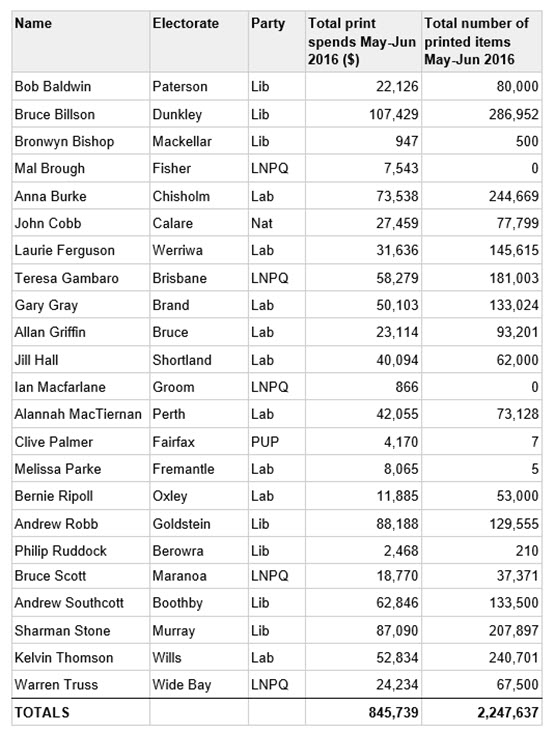 What do you think of these figures, and the ensuing rule changes? Send your comments and responses to [email protected].

So… both parties used a genuine allowance for printing communications with the electorate without any apparent breach of the rules. To the extent this might be seen as in breach of community standards, Turnbull already changed those rules 2 years ago so that it won’t happen again, making this seem more like “olds” than “news”, although that hasn’t prevented the writer sniping with whatever irrelevant-but-negative sounding tidbits possible such as “The invoice for the flyers was dated May 11, 2016 — two days after the dissolution of Parliament and when Burke was no longer even an MP” or the fact that the flyers didn’t win the seat…

One suspects the most likely outcome is simply that people print earlier, since these allowances are still there, and parties will just have to lump it that a retiring incumbent can’t print stuff introducing the next candidate, only promoting themselves.

That expenditure seems to have been legal. What interested me is the electoral subsidy of $23 million to Labor and $24 million to the Liberal Party. The Liberal Party usually gets fewer votes and fewer seats than Labor and can’t govern without the Nats so I wonder how the formula works to give them more money than Labor. Not saying it’s incorrect, just wondering how it works.

How long ago was it that “The Age of Entitlement* is over” (*as judged by the Limited News Party and Treasurer Hockey) was announced? ….. Well, for most of us anyhow.

What a conga line of suckholes…
As usual, it is the LNP outdoing themselves in hollow sordid business, but Labor follows on getting a bit involved themselves.
Those ‘introducing’ posters are clearly party political…how come the AEC doesn’t clamp down. Oh right, the politicians make the rules for themselves.
A small silver lining – ‘Helicopter’ Bronwyn didn’t sponge much to benefit her replacement Jason ‘I’m Not Polish’ Falinski. He isn’t as offensive as my local member, but dull and pointless. He is catching up as one of the worst wasters of money writing pointlessly to people in his electorate, mind.

$845K is enough to fund one more new clinical trial for a disease that currently has no good treatment. Just saying.