World media has latched itself to the Thai cave rescue operation, but some journalists aren't helping things.

World media swarms around the Thai cave rescue, ABC supporters come out to fight, the AFR shifts bodies around, and other media tidbits of the day.

Correction: The precede to the Media Files column, published in the Crikey newsletter and website on July 5, 2018, may have been taken to suggest that Rowan Dean’s tenure on the board of Medical Journal of Australia came to an end involuntarily. That is incorrect. Mr Dean’s term ended as scheduled on June 30, 2018. Crikey apologies to Mr Dean for the error.

How the media is covering the Thai rescue. The story of a Thai soccer team trapped in a cave has captured the attention of the world media’s — even if they have now been moved away from the cave’s entrance. ABC correspondent Liam Cochrane was critical of some other journalists’ behaviour, retweeting a video of Nine’s reporter on the scene, Alice Monfries, who was trying to get comments from expert divers as they arrived: 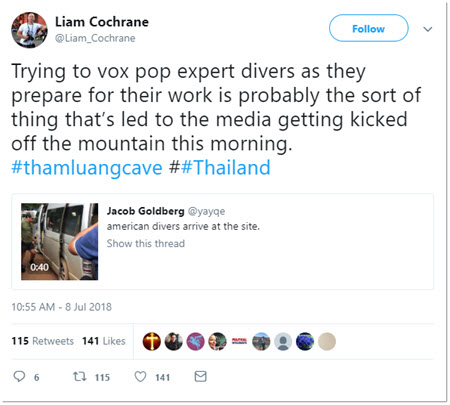 Last night, Seven, Nine and the ABC had special coverage of the rescue operation, crossing to reporters on the scene. And today, front pages around the world have been dedicated to the efforts to save the boys.

ABC supporters rally. Supporters of the ABC in Sydney yesterday rallied in support of the public broadcaster. The NSW Teachers’ Federation building in Surry Hills was filled to overflowing, and ABC stars including Kerry O’Brien, Magda Szubanski, Phillip Adams and Julian Morrow addressed the crowd. The protest, run by the Friends of the ABC group, was the first in a series of supporters’ rallies across the nation. They have been organised to protest the increasing political attacks and cuts to the ABC in recent months. 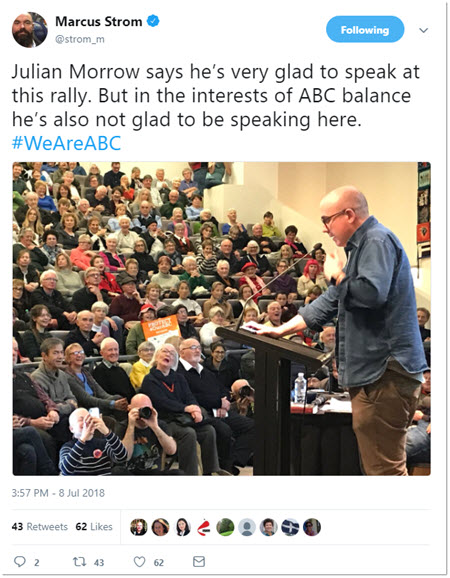 The revolving door. Standby for a beauty parade of would-be economists for The Australian Financial Review as the paper replaces its Washington correspondent John Kehoe with its economics writer Jacob Greber. The change happens next month, with Kehoe returning to Australia.

Netflix abandons reviews. Netflix is slowly watering down the human element in using the streaming video service. It abandoned its five-star rating system at the start of this year, replacing it with a Facebook-like thumbs up or down. Now it says it will remove user reviews from August, with all existing reviews to disappear from the website by the end of next month.

The reviews allowed users to comment on programs, but they were only accessible on the desktop version of Netflix, not on mobile devices or connected TV devices, meaning that only a small number of the Netflix user base would see them. In a statement to CNet, a Netflix spokesperson said that usage of the written reviews had declined over time, and that they were not used as part of the company’s recommendation engine to begin with.

The March quarter saw Netflix report a huge 125 million subscriptions around the world. Its shares have more than doubled this year on Wall Street and it is now the most valuable media company in the world with a value of more than US$177 billion, more than Disney and Comcast. Netflix reports its June quarter results next Tuesday morning, Sydney time. — Glenn Dyer

Glenn Dyer’s TV Ratings. Nine returned Australian Ninja Warrior to its schedule last night. It did well with the demos, but with 1.31 million people nationally, ran a clear second to Seven’s House Rules which grabbed 1.34 million. MasterChef on Ten was squeezed to less than a million nationally — 975,000 and the first ep of the new series of Jack Irish on the ABC managed 1.05 million and first place from around 8.45pm onwards. Read the rest on the Crikey website.

5 thoughts on “Media Files: How the Thai cave rescue is being covered”