Seven's Sunday Night has been honoured with the prestigious Wankley award for its shoddy "African gangs" story.

Here at Crikey we like to take note and recognise the hard work some journalists do to show why our profession is profoundly distrusted by the public by handing out the coveted Wankley award. Today the honour goes to Sunday Night, for its story yesterday about Melbourne’s “African gangs”.

The narrative is familiar to Victorians, taken up with particular gusto by the Herald Sun since the 2016 Moomba festival in Melbourne was marred by rioting young criminals. Between the tabloid media and politicians capitalising on law and order panic, the story is that Melbourne was being taken over by violent Sudanese gangs.

Opening his story last night, Sunday Night reporter Alex Cullen said police denied there were gangs because “we live in such politically correct times”. But, as we reported last year, Victoria Police have acknowledged a higher-than-average crime rate within the South Sudanese community, but last year (and in an interview to Sunday Night) said it was wrong to call them “gangs”.

A police spokesman interviewed as part of the story explained why police didn’t use the word “gang”: “They’re over-represented in crime and some of them are behaving in very serious offending … I think we call it for what it is. I don’t think we want to give these young people any additional notoriety or additional kudos for something.”

Despite Cullen’s claim that “barely a week goes by” without a story of crime carried out by African gangs in the news, there was no background or further evidence of more than one particular incident.

Most of the story was based on an interview with the victim of an especially traumatic experience, Elaine French, who was working in a Toorak jewellery store that was robbed twice in three months at gunpoint. French talked about her trauma, told the program she would have panic attacks if she saw “a coloured person”, and said any of the young criminals should be “deported back to where they came from” (most of those caught in relation to these crimes are Australian-born, and come from a variety of backgrounds, police have said).

Cullen explained why French and others were angry about the crimes: “For far too long police and politicians have refused to acknowledge that African gangs even existed, let alone were responsible for an alarming surge in violent crime.”

Last week, Victorian crime statistics showed a drop in the crime rates, and the lowest rate of home invasions in 10 years.

Community leaders were furious about the story before it even aired, with lawyer Maker Mayek starting a Twitter hashtag to protest the story, #NotMyAustralia. 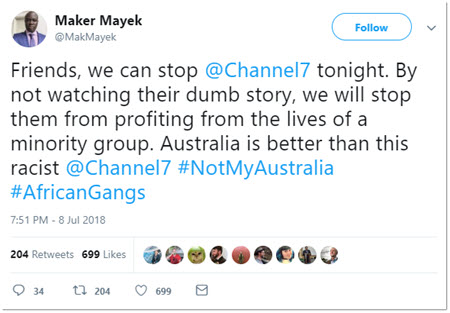 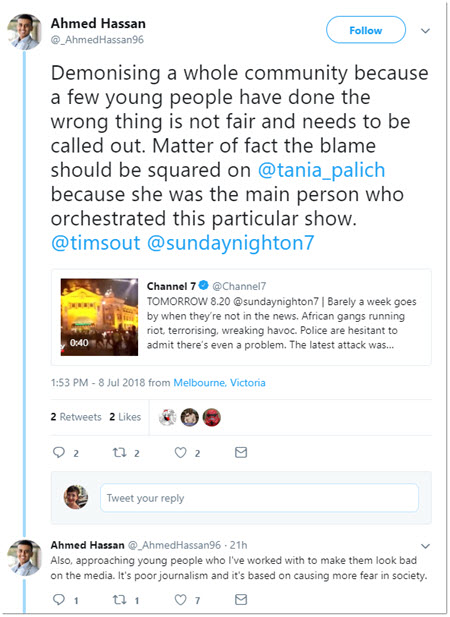 In a statement, a spokeswoman for Victoria Police said people from African backgrounds only represented a small portion of offenders in the community.

“We know that young people of African backgrounds are overly represented in some high-harm crimes, and police and African Australian communities are working extremely hard to deal with the issue,” she said.

“The groups that have been labelled ‘gangs’ are effectively groups of young people coming together, sometimes for one night, to commit offences. It’s not what we have traditionally called gangs. Some of these young people might only join up once and never be there again, others might be there a few times. It may be street-gang behaviour that we are seeing and responding to, but they are not gangs in the traditional sense, which are typically more structured and organised in their offending.”

A spokeswoman for Sunday Night did not respond to Crikey’s specific questions, but said: “Sunday Night stands by each and every element of the story published in last night’s program.”

NOTE: This story has been updated to include comment from Victoria Police and Seven, received after deadline.

What did you make of Channel Seven’s coverage of the so-called “African gangs” crisis? Write to us at [email protected].