Another Fox in Trump’s White House

Former Fox News co-president Bill Shine has been named as the new White House Deputy Chief of Staff for Communications. It's an extremely controversial pick, but anything but unexpected.

Donald Trump is virtually a Fox News contributor, so frequent are his interviews with the Murdoch family’s news channel. Rupert Murdoch is virtually a member of the White House staff, so frequent are mentions of his weekly (and sometimes daily) talks with the President. So it will probably come as no surprise that the Trump administration has recruited heavily from Fox.

Overnight, former Fox News co-president, Bill Shine was named as the White House’s Deputy Chief of Staff for Communications. This comes 14 months after he was let go from Fox over allegations he failed to act on claims of sexual harassment from a string of Fox News female staff and contributors.

Shine shone as deputy to the late Roger Aisles, who was sacked by the Murdoch sons in July 2016 after accusations of serial sexual harassment from many women including Fox News host Gretchen Carlson and former host Megyn Kelly. News of his appointment has not been taken well by Ailes’ accusers. 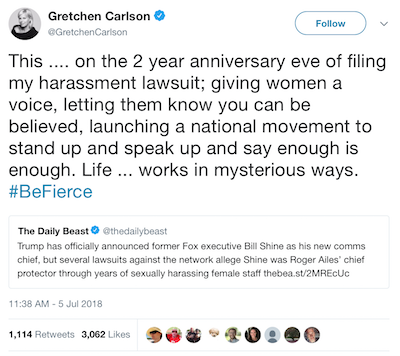 Shine will join a long list of Fox talent — both staff and contributors working for the Trump administration.

There’s the National Security advisor, John Bolton, a long-time Fox News commentator, who joined in March of this year. Joseph E. diGenova was also added to the President’s legal team that same month. DiGenova is a former United States attorney and a frequent legal expert on Fox News.

In April 2017, Heather Nauert a long-time Fox News journalist and host (she also worked briefly for other networks) was named the US State Department spokesman. She was promoted in March of this year to the role of Under Secretary of State for Public Diplomacy and Public Affairs.

Former Fox News contributor and George W Bush media operative, Mercedes Schlapp was named White House Director of Strategic Communications in September of 2017. She remains on Fox News, but on the other side of the camera. So does Tony Sayegh, another political lobbyist and Fox talking head who in March 2017 was named Assistant Secretary of the Treasury. He continues to appear regularly on Fox, especially on Fox Business, as a spruiker for Trump’s Department of the Treasury.

Regular Fox News foreign affairs commentator KT McFarland had a brief term at the White House as deputy National Security Adviser to the now disgraced Michael Flynn. She was forced to quit that post but was in line to become US ambassador to Singapore until questions were raised about the truthfulness of answers she gave in relation to Flynn and his contact with a Russian diplomat.

Fox News this morning carried a list of people who have left the White House in the wake of the resignation of EPA head Scott Pruitt. Not surprisingly KT McFarland was not included in the list.

Yes these grubs being attracted to the Trump camp, or at least being the only staff they can attract, is all very amusing…up until the time the Orange maniac invades a sovereign country and Turnbull orders our obliging ADF into some shit hole with the US troops.

Thank you. You have made my weekend. I have regularly written the line that I heard on a comedy program: Fox News, along with free trade and fun run are the great oxymorons of our times. Now I can add “Fox talent” to the list.

I wonder what the mid term elections will bring? Is it too late?
Is he not the purest essence of the Benighted States?
Not a bug but the epitome.

Rupert’s maggots are not fussy where they work. Rupert will tell them what and how to do it, that includes instructions to the orange pussygrabber himself.

I look forward to watching Rupert hang this specimen of A. aurantia out to dry when he runs out of time and cover – then the lengths he’ll go to, to distance himself and his PR empire from the administration – despite all the recorded evidence.
We’ve seen “This is the most humble day of my life” already.