The Australian Press Council has found The Sydney Morning Herald in breach of privacy for a story about a murder case.

Press Council finds The Sydney Morning Herald in breach of privacy, Australian TV schedules a few blasts from the past, NSW wins or loses (depending on who you ask), and other media tidbits of the day.

SMH murder story breached privacy. A Sydney Morning Herald story about a man fatally stabbed in Sydney unreasonably breached his family’s privacy and caused distress, the Australian Press Council has ruled. The article reported on a court hearing about Brian Liston’s murder in December 2015, including the details of how he was killed, which were revealed in court. Online, the story had a photo of Liston with his children taken from a funeral booklet which requested those at the funeral not cooperate with the media and respect the family’s privacy.

The Press Council found that by publishing the photo, the Herald had breached the family’s privacy, and that it published too much of the detail revealed in court about the murder. It said that even though the details were on the public record, publications needed to comply with standards of practice that could extend to not reporting information given in open court.

The council considers the explicit description of how Mr Liston was pursued and murdered, which included where on his body the injuries were inflicted, an estimate of the number of wounds and, in particular, precisely how they were inflicted was more than necessary or appropriate to achieve the publication’s understandable aims of serving the public interest.

Back to the future. Ten has announced it is bringing back Sports Tonight, seven years since it was last on-air. Matt White will host the weekly sports discussion program, with Laurie Daley and Josh Gibson.

Meanwhile over at Seven, they’re taking a look back at soap Home and Away to mark its 30th anniversary with a special to be hosted by Sunday Night’s Steve Pennells on July 17. The program will include interviews with some of its former stars, including Melissa George.

What’s your angle? One story, two very different takes in Sydney’s two daily newspapers this morning. News Corp’s Daily Telegraph reported the GST deal as an injection of funds to the NSW economy, while Fairfax’s Sydney Morning Herald reported that NSW would be losing out in the deal. 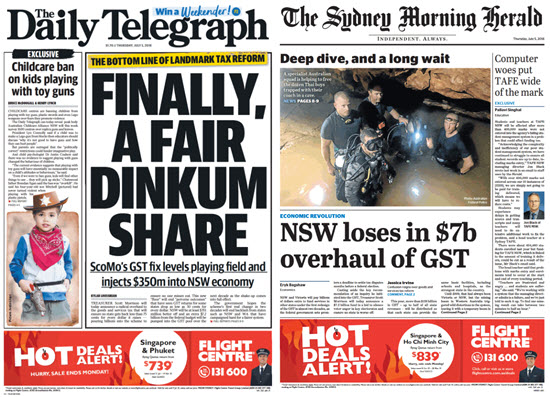 Geoffrey Rush to settle? Fairfax reports that actor Geoffrey Rush and the Daily Telegraph could be preparing to settle Rush’s defamation case against the newspaper. Parties to the court action have reportedly been spotted meeting, ahead of the trial scheduled to start in September. Rush is suing the paper over its “King Leer” front page and story, which accused Rush of inappropriate behaviour during a production of King Lear in Sydney — accusations that Rush denies. 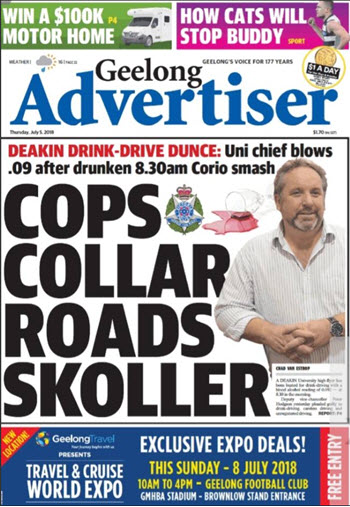 Glenn Dyer’s TV Ratings. Last night Seven beat Nine and Ten. Seven would be smart to show The Front Bar live on 7mate in non-AFL markets from now on, seeing it’s doing Eddie McGuire like a dinner with the bonus of making Sam Newman even more irrelevant. Last night The Front Bar had 360,000 national viewers and 192,000 in Melbourne. The AFL Footy Show on Nine had 260,000 nationally with 136,000 in Melbourne. That’s a hiding from Seven and another headache for Nine and McGuire.

That Geelong Advertiser headliner is a beauty.